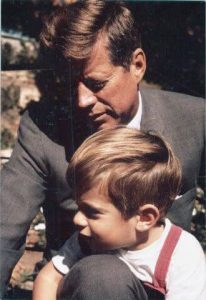 End of an Era

In 1963, I was thirteen years old and living outside New York City in Manhasset, on Long Island. We’d moved there from Canada the year before.

I was quickly getting used to “the American way-of-life” and was inspired by John F. Kennedy, the then current  president. The shooting on November 22 of that year had a huge impact on me. I can see in my mind the classroom I was in when the news broke. We all got sent home immediately and ended up going directly to the black and white television. I remember it was a Friday, and so we had the rest of the weekend to mourn. We watched every minute of what transpired. I saw Oswald get murdered live on camera.

Over the ensuing years, I buried myself in books about the assassination and never for a minute believed a single shooter could have killed Kennedy; it was all very strange.

This morning, I learned that JFK died of a stoke … yes, today. He was apparently 103. I’ve known for the past week, or so, that he was still alive. It’s too bad he couldn’t have witnessed what’s going to happen on March 4. A lot of things are “too bad” — the truth always comes out at these cycle tops and what’s going to come out will certainly be shocking. 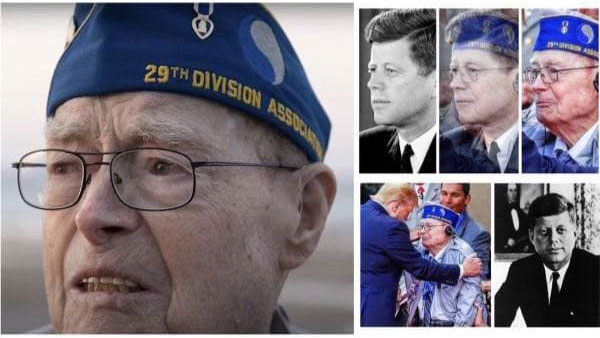 I learned about his “second” death through JFK Jr., who’s been posting inside the Telegram application. He apparently died this morning, January 30.

It was confirmed shortly after by Pompeo, Trump, and Carolyn Bissette-Kennedy 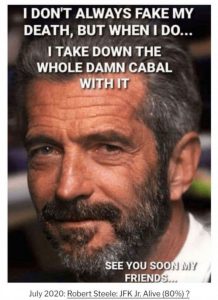 The death of Former President John F. Kennedy was deeply saddening. Sorry for JFK loss, Secretary Kennedy. May God have mercy on his soul. He was a great patriot and his path will continue forever. Rest in peace, sir. — Mike Pompeo

My words don’t fit in the sentence. Sorry John John. Senior John F. Kennedy was a great man, and I will continue his way. — President of the United States, Donald J. Trump

I must admit that everything stopped for me on the news and my eyes welled up just thinking about it and what could have been. It’s taken me much longer than expected to put this weekend’s post together. I’m finding myself is quite a melancholy mood this evening.

I’ve learned so much over the past two-three weeks and you’re going to learn what I’ve learned, shortly. I expect everything will be out in the open by March 4, which is when the 19th President of the United States will be sworn in. 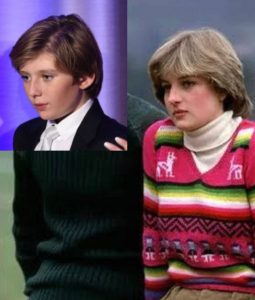 On the other side of the coin, you’re going to learn about well-known people you thought were dead. It’s so unbelievable! I’ll just provide you with some initials: PD, EP, and MJ — one a princess and two singers.

The coming month leading up to March 4 will indeed be shocking. The “world is turning” for the better. Over the next few weeks, I’ll provide some more information on where we’re at and some depth you may not get from the main stream media (in fact, I don’t know how much they’ll cover initially). Just know that the United States Corporation is dead, the US is currently under martial law, and most of the international cartel have been neurtralized. Not all the work is done, but they’re “over the hump.”

On my site, thetruthsage.com, I’m spilling most of the beans this coming week, and providing information as to how to thrive with the major changes that are coming. It will be very, very good in the long term, but Mother Nature will provide a great deal of pain along the way — in that regard, nothing has really changed. Natural cycles till play out.

Mother Nature is indeed all powerful.

However, the Earthly powers that be are going to fill up Hell with all the bad people that deserve to be there. There will be military tribunals and they apparently will be public.

And that’s enough of the ongoing story for this weekend.

We’re in the B wave overall in the markets. Once that’s done, we’ll have one more wave up to a new high and then a large wave to the downside. We might see that top around March 4 — a very important Friday. However, I expect more to start coming out this week.

Don’t believe anything you see unfolding from the current sham administration. It’s all being carried out on a movie set, not in the White House. More to come.

Btw, there is no “pandemic,” stay away from vaccines, and I’d like to see more people ditch their masks. They’re all about control, and you have the power to be free. 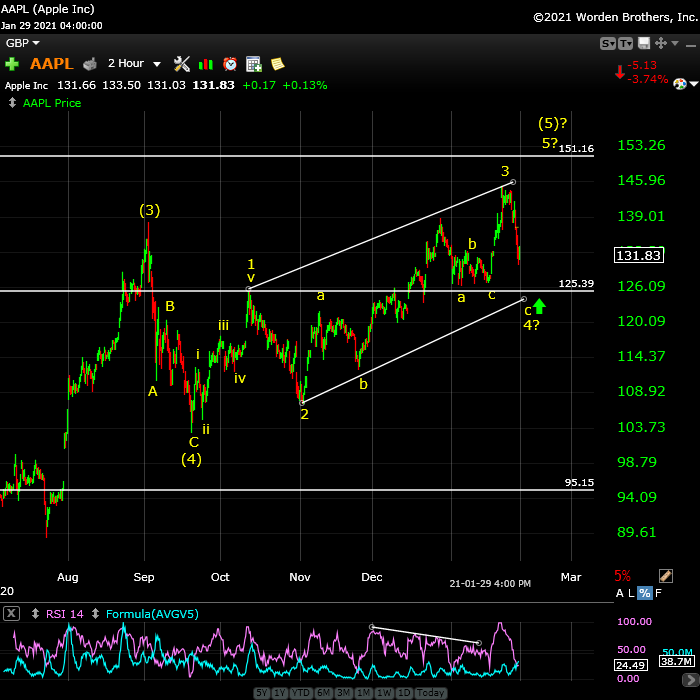 Above is two hour chart of AAPL as at the end of the day on Friday. We’ve turned down, as expected.

With the most recent wave up, it still looks like an ending diagonal, as that wave appears to be in three waves. The determining factor will be if the fourth wave drops below 125.39, or not. Below that level confirms the ending diagonal, as the fourth wave will intersect with the area of the first wave up. The difference between the two patterns going forward will be the length of the fifth wave and its structure.

We've had confirmation on Friday that we're indeed in a B wave down (or 4th, in the case of an ending diagonal pattern). As I've bene saying for the past few weeks, the pattern we're in is most probably either an ending diagonal, or an ending expanding diagonal. I've removed the lines identifying the ending diagonal option only because they made the chart so complicated. However, both patterns are still options.

Keep in mind that NQ/NDX is most definitely in an ending diagonal and have dropped quickly into a 4th wave down, which is not complete.

With the ending expanding diagonal, we  would probably see a partial retrace down, but not to the lower trendline. Then, we'd see a final fifth wave up to the upper blue trendline.

With the ending diagonal, we'll see a drop to the lower red trendline and then a final fifth wave up to the upper red trendline (and possible see a throw-over wave above it) but it will not reach the upper blue trendline.

There are multiple possible targets on the downside, but I'd expect to see 3500, or lower.

Summary: We're in a diagonal of some sort, which needs to play out with the current, large move to the downside and then a final fifth wave up to complete the pattern.

Most other US market indices have similar patterns. Diagonals are ending patterns and warn of an impending, dramatic trend change after they're complete. This puts us in the final stages of this rally up from March of last year.