This Week, THE STORM 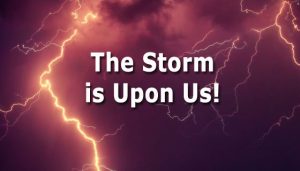 This weekend, the USD in the form of DXY, the US dollar index is somewhat out-of-sync with the US indices. DXY is coming out of a triangle and expectations are for a new low (below 3640 in the SP500). The US indices are getting very close to the top of this corrective wave to the upside.

However, USD dollar currency pairs still have a ways to go still to get to the area in which I expect a turn, so we may have at least a couple of days to go. I would expect the turn will coincide with an event, and depending on the magnitude of that event, could trigger a larger drop than just a double bottom (which is the minimum we need to achieve to end the fourth wave down from early January in futures.

The word is that Friday, June 24, most of the planets of our solar system were lined up, which happens about once every 1,000 years. This is a good indicator that society is at a major turning point. If you were to ask the US Military, Allied Forces, and Galactic Federation, we certainly are! 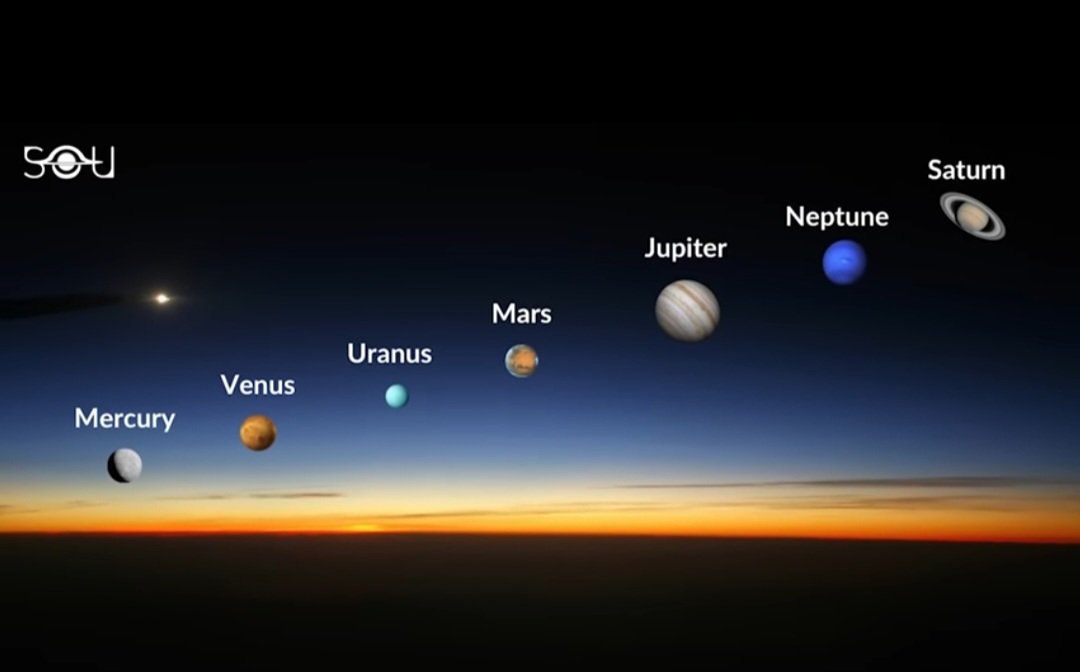 We’re in the depth of the storm, which was promised mid last week to take about thirteen days to July 1, 2022. The turnover this week in Roe v. Wade is expected to see planned riots in about 40 cities come to fruition and the National Guard is ready to clamp down on them. There are calls for people living in major US cities to stay close to home for at least the next week.

It should amount to a major shutdown of borders, which means trains and planes will be shutting down. Mass arrests are taking place and tons of information is being declassified this week. There are special channels now being set up in Telegram for which you must be approved to join. This might mean Telegram will remain open during the Emergency Broadcast System ten day playback period (speculative), which I now think starts shortly after July 1. 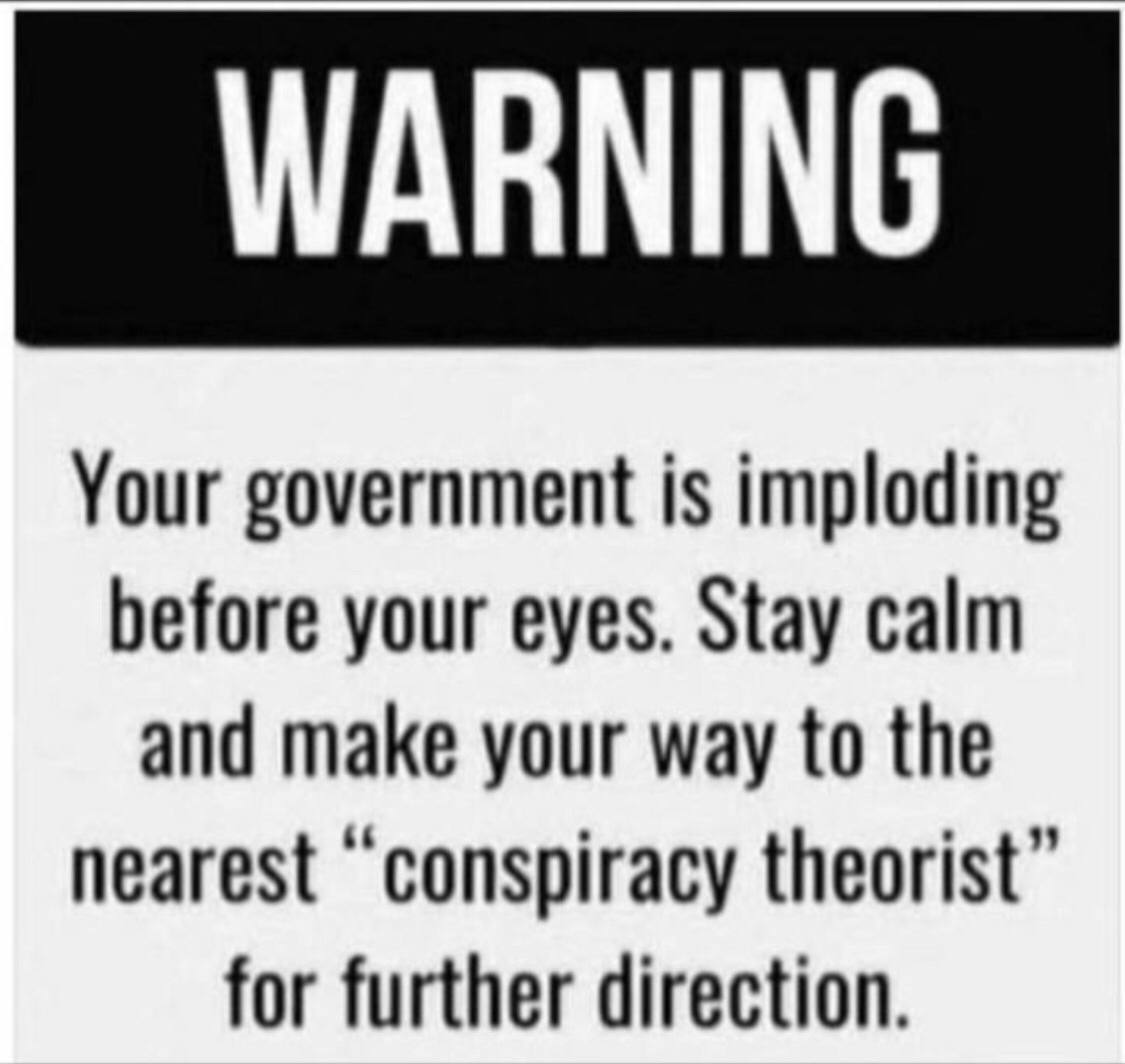 Last Tuesday was solstice, the “longest day” of the year in terms of light. It’s also very often the cusp of a trend change. In this case, we’re expecting the end of the fourth wave down from January, and the turn up in the final fifth wave before a very large plunge. But the market is very much aligned with what is happening behind the scenes worldwide. We’re still expecting a low this coming week.

The Emergency Broadcast System is sitting in the wings and we’re very close to seeing it triggered (I now think after July 1 (perhaps July 4), because they’re calling for a very intense thirteen days of mass arrests that started about mid-week, last week.

This is going to be a “ramped up” week of major declassification and exposing the corruption of the Deep State. It’s getting very close to the end for the fake Biden regime.

Take, for instance, the January 6 Unselect Committee witch hunt, which is a partisan attempt to create a coup, by drumming up charges to arrest Trump. It is being exposed and I expect the tide will turn for good this coming week (would be very surprised if this isn’t a major focus this coming week).

I’ve read new intel this morning that China is just about the take over Taiwan (this is all good, because China has been mostly cleaned up; Taiwan, on the other hand, has not been entirely. It’s a major hub for child trafficking).

Grab your popcorn. This should be a good week!

On top of this going on within the public view, in the shadowns, JFK Jr., on his channel in Telegram is putting out code like this:

We’re very close to the end of this phase. The STORM will last through July 1. I would expect to see the death of the Queen and the start of the Emergency Broadcast System shortly thereafter.

While I say that, here’s a message from tonight’s Restored Republic Report (which comes out nightly and contains military intel, reports: “There were geopolitical forces that have caused another delay in completing the Global Currency Reset, plus Mass Arrests were taking longer than anticipated.  The delay was coupled with apologies, the leadership just needed more time.”

Here’s a smattering of what’s out tonight — there’s so much more!

Looking at THE STORM and Upcoming Events

We still have these major events still to go. I don’t know what the timing will be, but it will start to get obvious in the coming days, I think.

We’re now in the GREAT AWAKENING phase, but THE STORM is still underway. Some of the expected events below have happened (GREEN CHECK MARK) and some are in progress:

This past week, JFK Jr.’s channel said, “The movie has come to an end.” (another clue we’re about done.

This is THE STORM. Best to stay close to home during the coming week. We’re likely to see more visible signs of military. They’re expecting riots in major cities in the US. Keep stocked up for two to three weeks. Arrests will continue during the Emergency Playback period. 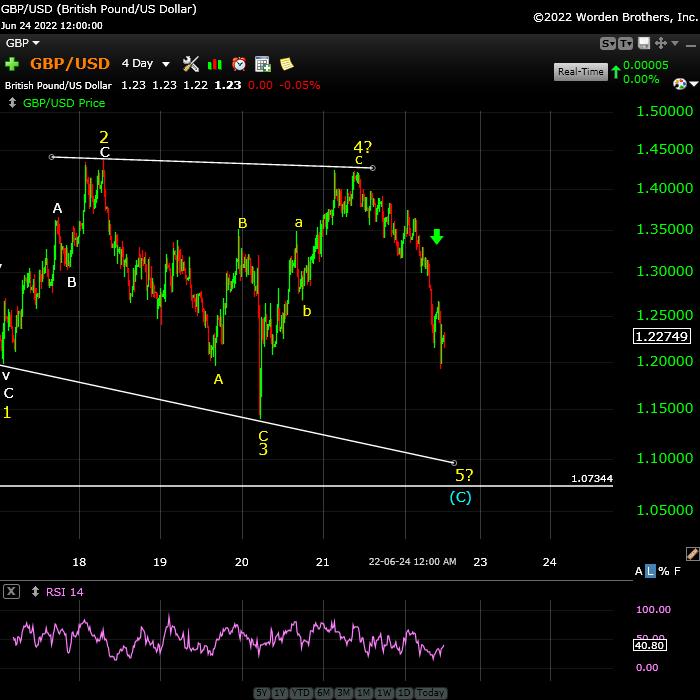 Above is the 4 day chart of gold. I called this weakness several months ago and thought i’d do an update. It’s a big drop to at least 1.1 and keeps plugging along. I would expect this wave to bottom after the next expected wave down in futures bottoms. 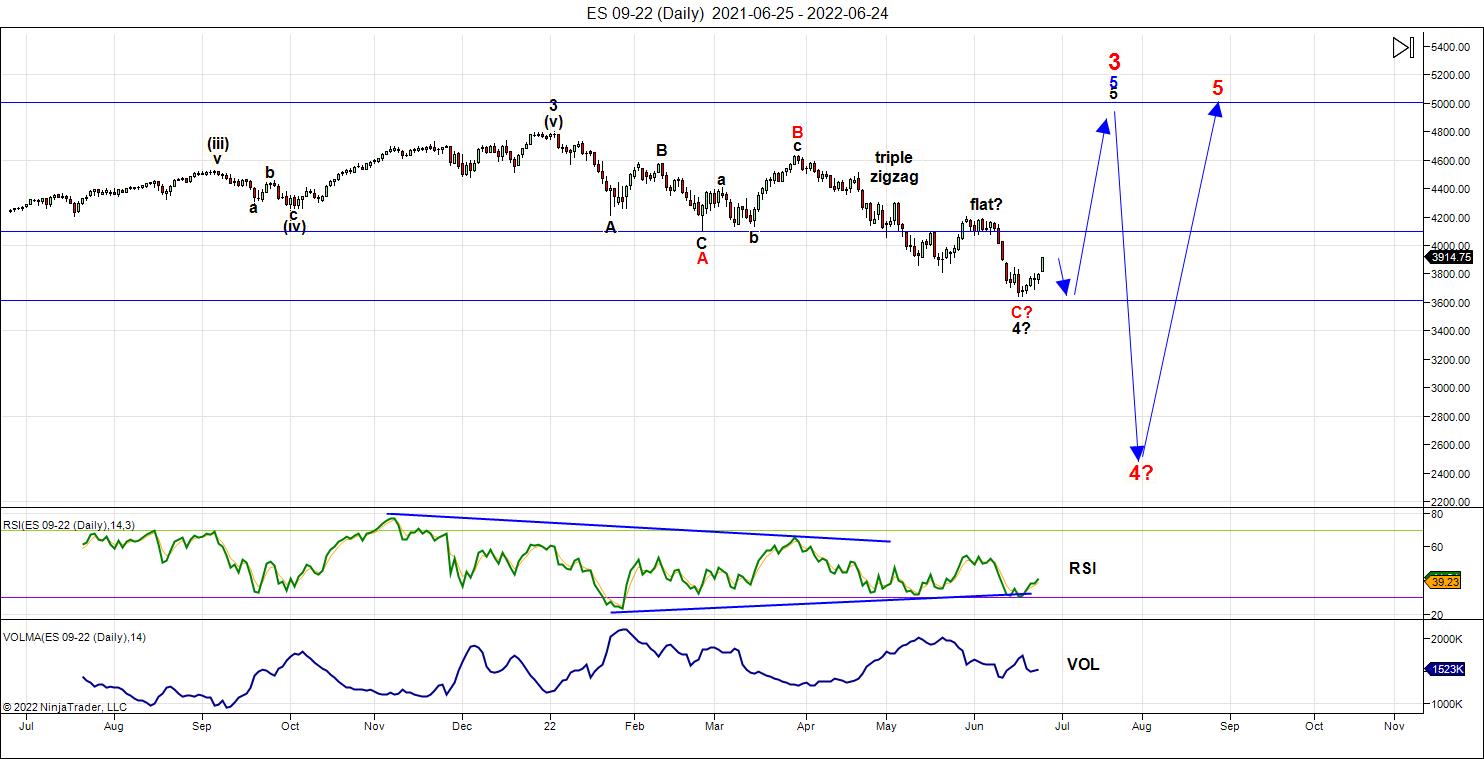 The expected corrective rally in futures continued this week and is possibly near an interim high, as RSI is very overbought. However, I'm not expecting an immediate turn down as DXY and the related USD currency pairs still have the balance of a rally to undertake.

This wave up has risen well above the required 38% retrace levelAnd this opens up several options for how to count it. As a result, I don't have a target on the downside, other than the fact that both ES and NQ need to reach a new low. You'll see this same pattern across most major stocks.

We have a week of declassification coming. We've also had the turnover of Woe v. Wade, which is expected to lead to riots in at least 40 US cities, which in turn should lead to the announcement of martial law and a transportation lockdown. I get the sense the Emergency Broadcast System playback is at least another week away.

Solstice was earlier this past week and had not resulted in a turn into the fifth wave, but we should see that happen once we get this new low in place, which should end the larger fourth wave down from early January of this year.

This market typically takes days to turn, as other asset classes must turn together with futures and most importantly, DXY, the US dollar index. We constantly have to wait for other classes to get to a turn point, if they're not already as a fibonacci ratio level. It makes it very difficult at turns; it's like herding cats.

We're at a point now where events that happened long ago are unfolding for the public now and one or two of them have the potential to move the market, so it's still possible to see a capitulation wave down a bit farther than expected after the predicted final bounce (perhaps the announcement of the Queen's death).

Once we have a confirmed bottom in place, we'll be looking for a wave up in five waves to, most likely the 5,000 level in the SP500. I'd expect it will take the entire coming week to find that bottom.

Summary:  We're more or less at the bottom of the fourth wave, but it is not technically complete. We have a corrective rally continuing this weekend, which appears to have a few days left to go, but when complete, i'm expecting a final drop to a new low to finish the large fourth wave down from early January of this year.

When the bottom of this large, five month long fourth wave is confirmed, it will lead to the final fifth wave up to a new high and end the rally from March 2020.

The rally up from March, 2020 is a zigzag, as was expected (a 5-3-5 pattern). It will eventually completely retrace to the downside.

Once we've reached an area below 2100, we'll turn back up to climb to a final slight new high in a fifth wave of this 500 year cycle top.