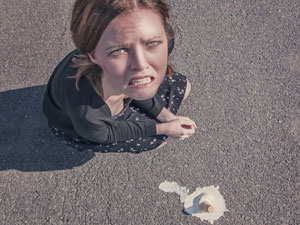 Friday was a very strange day from an Elliott Wave perspective.

We were supposedly in a second wave correction after a surging first wave up on Thursday that extended into the night in futures (Futures went up another 11 points overnight and then in the wee hours, collapsed into a second wave).

When the market opened Friday morning, ES was in the normal second wave correction. However, NONE of the US indices even came close to making that same correction. The SP500 didn’t even retrace to the 38% level, which normally would be an absolute minimum. I’ve never, ever, seen a non-confirmation like that between futures and cash before and it sets off a great big warning bell!

Friday morning, I’d made a comment that ES, after a slight rise, would return back to its base again, because I knew that the SP500 has not yet corrected … but it never happened. It wasn’t a bad call, it’s just that the market apparently “broke.” Futures and cash indices now have completely different patterns.

After some head-scratching, along with reviewing every relevant chart I can think of, I’ve come to this conclusion: We now appear to be in a third sub-wave  up (I think so, anyway) and headed for a new high. But if waves are not going to form well, my analysis  on a short-term scale may be questionable going forward.

In any event, it’s a warning to anyone in the market.

Markets in long, long corrections (like the one we’re in in the US indices) sometimes start to “break,” which is what we’re likely seeing. This kind of action supports the idea that we’re in the final sub-wave to a final high in a market that is barely holding up.

That being said, let’s look more closely (and critically) at the overall action and larger pattern.

So, what’s the pattern? I believe there are three possibilities, two more flawed than the third.

The bottom line is that I believe we’re now in the final fifth wave up, headed for a new and final high above the 2965 level in ES. This means all the US indices will need to get to a similar new high, which will send some indices higher than others. When complete, it will result in a dramatic turn to the downside once their all achieve their objectives.

The US indices are clearly on their last legs. On Friday, we had what appeared to be a non-confirmation between ES and the SP500, with what appears to be different counts. As well, these two sisters have different tops near the 62% level, with a difference of 16 points, even when taking into account the differential.

Overnight on Thursday, ES corrected in what appears to have been the expected second wave after tracing out a third wave. However, the SP500 had no real second wave correction and instead continued the rally. This gives ES the appearance of a possible motive first and second wave, while cash traced out what's looking more like a zizgag.

This is the first time I've ever seen futures and cash with what may amount to different counts. This is the sign of a very sick market and suggests the final top on this correction is near at hand.

Under the surface, this market appears to be falling apart.

While there are several possible counts (and patterns) to consider, most are flawed. The bottom line is that the waves down in the US indices are corrective and look like various versions of a fourth wave waiting for a fifth to a new high. After several hours of analysis, that's my projection — a new high appears to be in the works for all the US indices. When complete, it will result in a turn down into the long awaited bear drop to new lows.

We're witnessing the "All the Same Market" syndrome, where virtually everything is moving in tandem with the US Dollar Index. The problem over the past few weeks has been the fact that the US Dollar index is in a horizontal triangle. You can't take much guidance from sideways movement.

I'm looking ahead to next week as perhaps being more important than the past several.

The zigzags down from the 3400 area in the SP500 took a month for the entire trip. This correction has now almost taken two months, something that is HIGHLY unusual and speaks to the manipulation of the Federal Reserve and the influence on the US Dollar.

As I stated last week: There's a lot of manipulation going on (the Federal Reserve is doing whatever it can to prop up the market with more debt — a very stupid idea, and you and I will pay for it in the end. Inflation through the extraordinary "printing" of debt has had its affect on the market overall. However, the problem is simply too humongous (the dollar is worldwide) and the Fed will fail. We're getting close to seeing the result.

Summary: We appear to be in a "combination" fourth wave down from the 3400 area. After the first set of zigzags down, we retraced 62% of the distance from the top. We've been sitting in this corrective ABC retrace for almost two months. However, it's showing signs of a top nearby at the same time it's showing underlying stress — it's close to falling apart.

I'm looking for a top nearby, and next week looks important. Once we top, another set of zigzags down seems to be the most probable outcome for the journey to a new low, but it's early to be sure of the pattern.