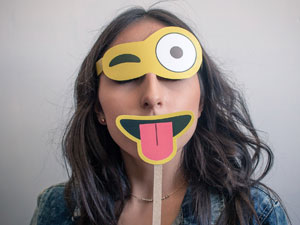 A Week of Fake-Outs!

I warned last weekend about the craziness. It continues. This time, I’m referring to the market; never mind what’s happening outside in the unreal world …

I’ve put in about 60 hours this week on the market and analysis — the most ever, I think. That’s an indicator of how incredibly difficult this market is. There were fake-outs all week long … mostly a result of a zigzag down from last week.

Zigzags are like politicians — they promise one thing but can deliver something quite different.

Last weekend, I predicted the drop. We got that … sort of. But the wave down was too short, and it “looked like” a five, but was actually a zigzag. The problem with zigzags is that they can either generate another zigzag to follow (in this case, to the downside), or they can completely retrace. You have no way of knowing which will be the case. On Friday of this past week, it became obvious that we were going to do the latter.

This past week has been brutal in two respects:

The other issue, of course is the market manipulation. The Fed has been trying to keep the market up. You can see this in some of the extraordinary bullish wave lengths this past week. The wave up this week in ES has been one for the EW history books — double extended waves as part of a fifth wave (which are traditionally very weak waves) in a correction.

A fifth wave of that level of bullishness as part of a correction tells you something extraordinary is going on. I attribute it to the actions of the Federal Reserve is attempting to prop up the market, along with the propaganda around this virus (no, the economy is NOT going to bounce back to its old self!).

In truth, nothing much has really changed from last week. It’s the fake-outs just about every day this week that have been the challenge.

Hopefully, we’re going to get back to a more predictable market once we see this next turn across just about everything (perhaps not gold quite yet).

In any event, I stepped back on Friday and decided to review the bigger picture so that we all know where both the Nasdaq and NYSE are going longer-term. It’s really important to keep the larger picture in the back of your mind so that the shorter timeframe has the support of the larger trend.

This has been a week of extraordinary fake-outs, particularly in e-mini futures. We've ended up the week at about the same place we were a week ago Friday.

We have a double zigzag pattern down from the 3400 top area in an ABC corrective pattern. I'm expecting one more pattern down to a new low in this fourth wave.  While I haven't labelled the most recent correction up to the 62% retrace level from the red A wave low, it's an ABC pattern, with the C wave consisting of five waves.

I'm expecting a slight new high in ES after a week in which we saw a zigzag down from the current high of the ABC correction at 2965. Zigzags are an issue at a time where we're expecting a set of zigzags down to complete the balance of the large fourth wave down from the 3400 area.

That's because zigzags are corrective waves. You can have up to three in a row, each following the other after a small correction, or you can have just one that completely retraces. The wave down this week from May 30th was the latter. As a result, we're headed back up to the 2965 start. Once we get there, I'm expecting ... finally ... a turn down leading to the large drop we've been expecting, to new lows.

As I stated last week: There's a lot of manipulation going on (the Federal Reserve is doing whatever it can to prop up the market with more debt — a very stupid idea, and you and I will pay for it in the end.

For the short term, it's created a huge retrace that has lasted about a month and a half, while the waves down from the 3400 top lasted only a month.

Summary: We appear to be in a "combination" fourth wave down from the 3400 area. After the first set of zigzags down, we retraced 62% of the distance from the top. That led to a turn down, but apparently in a fourth wave, which seems to be leading to a complete retrace back  up.

Once we top, another set of zigzags down seems to be the most probable outcome for the journey to a new low, but it's early to be sure of the pattern.