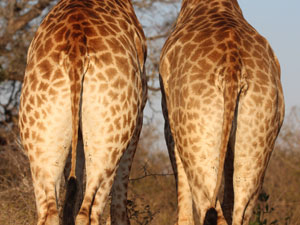 Or a Double Bottom Ahead?

My take at the moment, is that we’re only going to get a single bottom, and we that we haven’t seen the end of this fourth wave down yet.

Relatively speaking, based upon the corrective wave structure up from March, this has been a notably long (in terms of time) fourth wave. SPX has now descended from the 3390 top for a total of 17 days (over three market weeks) and has, by the looks of it, another couple of days to go.

My bias this weekend is to the downside, as it looks to me like we have an ending diagonal playing out in ES, NQ, and possibly in SP500 and NDX. In any case, the waves up in the past couple of days are corrective and we haven’t satisfied typical fibonacci ratios for a C wave down.

The other thing we haven’t seen is fear. A fourth wave should exhibit some fear at the lows, but we really haven’t seen that aspect of this drop.

So, my bias is for a new low in an ending diagonal on Monday/Tuesday, perhaps, following by a dramatic turn to the upside. This does not mean we’ll see much of a change to my prognosis of either a diagonal or triangle as part of the fifth wave. 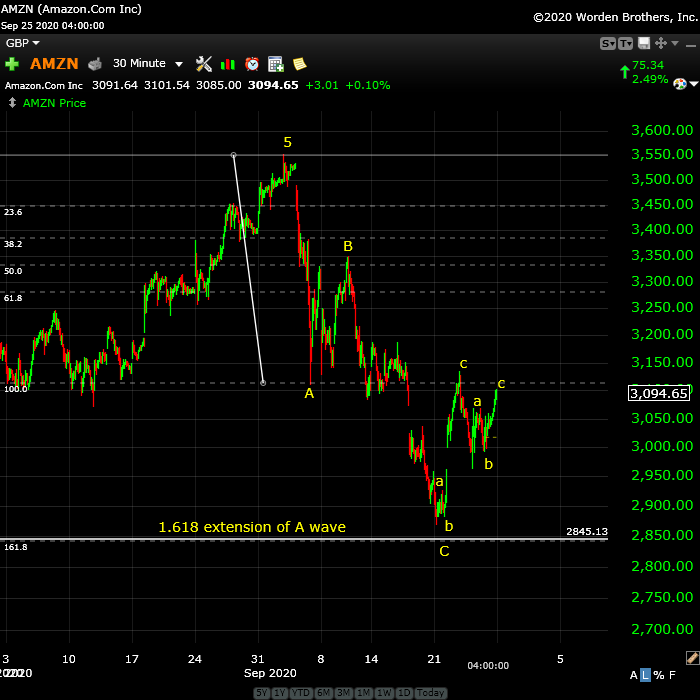 Above is 30 minute chart of AMZN showing us the setup at the end of the day on Friday.

I’m posting this chart and the one below in light of the fact that the current direction in futures (at least, at the end of the day on Friday, seemed questionable. I would normally access other US indices to get a sense of how their current patterns might support my analysis, or not. The other indices, however, currently all have the same pattern (or similar) as SPX and NDX, so that doesn’t help.

Often, I have to go farther afield and analyze individual stocks.

The chart of Amazon (above) shows two sets of corrective waves up, and on Friday, did not make a new session high. Presently, it’s set up to drop back down to the 2845 area. Note that, similar to ES, it has not quite made it to the fibonacci measured target. 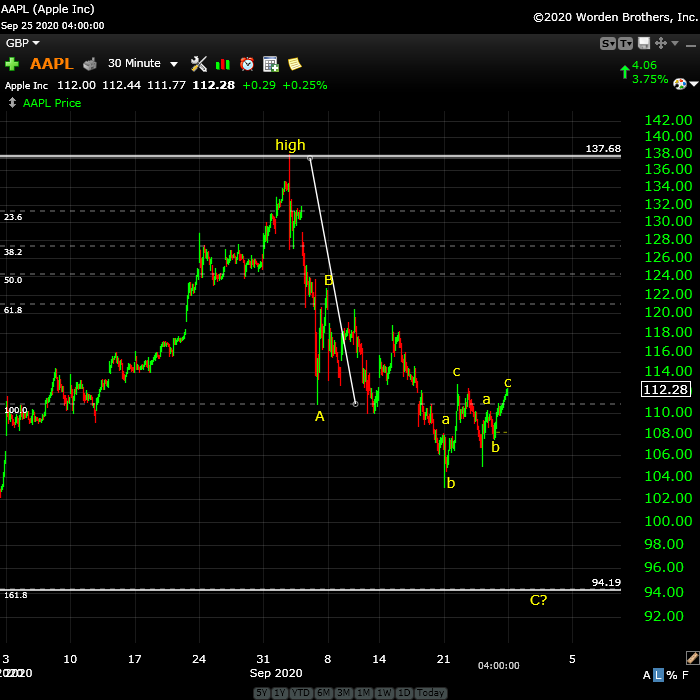 Above is 30 minute chart of AAPL showing us the setup at the end of the day on Friday.

This pattern up is similar to that of AMZN. It has one abc wave up from the bottom and then three waves down, followed by three corrective waves up that also did not go to a new high. This pattern is bearish.

It’s a long way from the most obvious downside objective, based upon a 1.618 extension of the A wave down. Note that I can measure from all three apexes of the A wave (two above the current level), and they all point to 94.19. While it seems like a stretch to get there, I have to listen to what Mr.Elliott and Mr. Fibonacci are telling me.

Both these charts are calling for another leg down, so I suspect that’s where we’re going on Sunday. We may not finish by Monday morning, as if we’re in an ending diagonal in ES and NQ, it should come down in three waves (or at least a corrective pattern of some sort)

We remain in this extremely long (time-wise) fourth wave of the rally up from March. The rally is corrective.

I'm expecting more weakness into the first part of next week and then we should see the start of a rise into the fifth wave. This weekend, we still don't appear to have bottomed, nor have we hit my fibonacci target on the downside.

We may, in fact, have traced out an ending diagonal in ES and NQ which may end up exceeding my 3200 target for SPX on the downside.

I still expect prolonged fifth wave up to a new high and I'm eyeballing the Nov. 3 election now for a turn to the downside finally, which is promising to be dramatic and volatile.

Almost all the currency pairs I cover are in ending expanding diagonals, as is oil, and DXY.  DAX (the German exchange) appears to be in similar pattern. So, we have ending patterns (which happen to be diagonals) almost right across the board. Now, it's only a matter of time. The market needs one more high.

Summary: It's an exhausted market getting close to top, which I now think will coincide with the US election.