Tyranny and the US Election 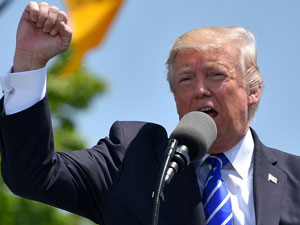 Looking for an Interim Low

We’re sitting this weekend near the bottom of a large fourth wave with one more final high waiting in the wings before the expected large drop into the 2100 area in SPX.

Mid-week, when I expect a low, will have been 14/15 days down from the top. That leaves us about six weeks until the US election on November 3.

Logically, a triangle or ending diagonal (both ending wave patterns) would fit very well into that time frame. It looks to me that we’re not going to see the top until the election. This has me reflecting back to the 2016 election. When the results were announced, the euro fell dramatically. The US Dollar also fell, but it wasn’t moving in the opposite direction from euro at the time. However, it is now, and I’m expecting it to rise, once the diagonal pattern it’s in ends.

The dollar rising is deflationary and it will send gold lower, as I’ve been saying for a long time. That will certainly surprise all the gold bugs, who are expecting inflation and higher gold prices.

The world is turning upside down.

Central bankers must be panicking. They got their hooks into countries around the world, mostly in the 1970s. The G7 countries all signed agreements with the Bank of International Settlements to provide their money for a fee. That agreement stipulates that these governments cannot create their own money. So, all these countries have lost their sovereignty. With the huge amount of debt they’ve racked up, the bill is becoming due.

“Let us control the money of a country and we care not who makes its laws.” This is the maxim of the house of Rothschilds, and is the foundation principle of European banks. — The Magazine of Wall Street and Business Analyst(November 10, 1934 p.67)

This has resulted in the New World Order, which has been in the works, of course, for decades. it’s no secret (or shouldn’t be) that we line up at airports to get frisked when there is no imminent danger to anyone. Climate change was another scam tossed upon us. Governments always like to develop a threat of some kind to keep a population compliant.

So we have a worldwide population with high levels of fear, a fiat currency that is worth very little in terms of purchasing power, and lockdowns across the world (with masks to remind us that they’re in control) as these villains attempt to take ultimate control. Yes, it’s a real-life 1984 playing out. It will get a lot worse before it gets better.

Behind all this is the fact that we’re going to have a worldwide financial meltdown and central bankers know it.

Here’s an article from Mathew Ehret at the Strategic Culture Foundation. It relates to the Canadian situation, but this is a worldwide phenomenon happening in countries around the world.

Even though “the herd” is still fast asleep, people who still have their wits about them are catching on.

Protests are cropping up all over the world. You can find out all about them from the protest tracker.

There are current protests in the UK, France, Canada, Spain, Italy, and of course Australia, where the state of Victoria has been effectively locked down by an authoritarian government.

The current world situation is akin to the moneylenders in ancient Rome before Jesus threw them out of the Temple. It’s the same battle that has gone on throughout history. Every 172 years, we go through a smaller version of the same process, but this is a 1000 year cycle top. 1000 year cycles are several times the magnitude (six times, to be more accurate) of the lowly 172 year cycles.

I’m working on a video this weekend that I hope will be live by Monday that will show how one of these cycles play out. Governments go down the same path each time, stealing money, going bankrupt, and then trying to cover up the disaster. They do that over and over again and we pay the price. History rhymes and we’re about the get yet another lesson on tyranny … worldwide.

The good news is that these oligarchs won’t win. The same cycles that allow them to build up this wealth and power, reverses and end in revolution, where governments will end up being overthrown and gradually democracy will come back stronger than ever. But, it will be a fight; history proves it’s never easy.

What has been will be again,
what has been done will be done again;
there is nothing new under the sun. — Ecclesiastes 1:9 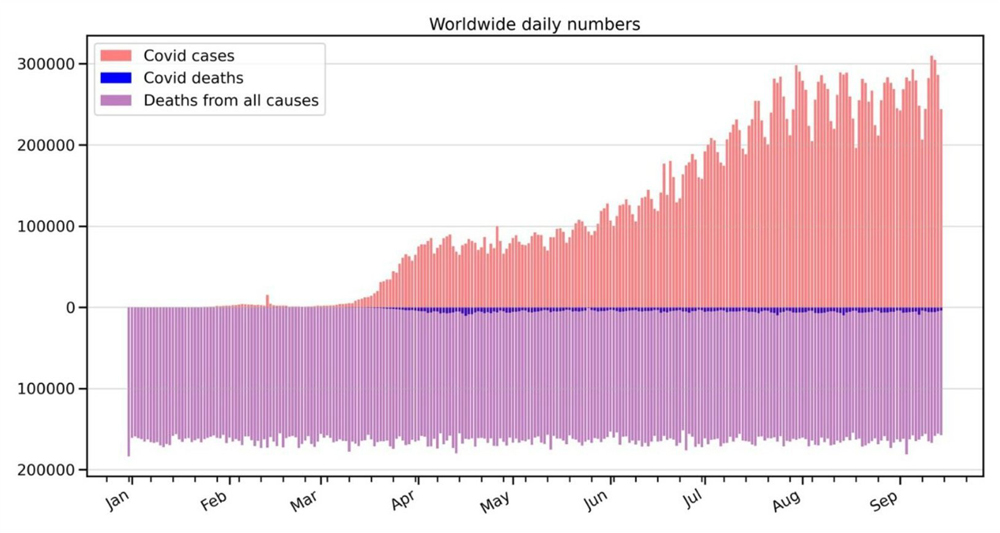 The above chart shows the real story regarding this “pandemic”. (click to expand) The lower purple coloured data are deaths worldwide from all causes. The dark purple line in the middle are deaths attributable to COVID-19, a SARS virus, that is in the common cold family.

The pink data above are cases, which have become the focus, because hardly anybody is dying anymore from the disease itself. We also know that you can’t accurately test for this flu bug. You’ll find the scientific background to this science here, and here.

At the same time, there are very effective cures out there, like hydroxychloroquine, that have been suppressed for “no apparent reason” (unless you understand what that reason is).

History rhymes. You have to go back 500 years to find the same pattern, but it’s definitely there. You’ll find it 500 years before that, and 500 years before that. Financial meltdowns happen at regular intervals, a result of governments and bankers inflating currency, in effect, stealing from the population. It’s happened over and over again since money was created.

On Thursday of this past week, I called for a new low for the current fourth wave we're in and on Friday morning called for a trade at the top of a small ending diagonal. Down we went. The problem with this fourth wave is that it's not deep enough and doesn't measure correctly from a fibonacci perspective.

It looks to me now that we're going to see a bottom of the fourth wave perhaps in conjunction with solstice (September 22). But this leaves us with one more wave up to go.

Elliott wave does not have a reliable timing tool and the usual cycles aren't working (due to everything now moving in tandem with the US Dollar). But with my projection for a new low in the next few days, that will bring the fourth wave to a total of fourteen days to complete this fourth wave, which I'm projecting to hit a probable fibonacci target of 3200 (1.618 extension of the A wave down).

This is somewhat speculative at this point, but I've drawn the projected path on the daily chart. Ending diagonals are ending patterns, result in a dramatic turn, and come down hard.

Almost all the currency pairs I cover are in ending expanding diagonals, as is oil, and DXY.  DAX (the German exchange) appears to be in an ending diagonal. So, we have ending patterns (which happen to be diagonals) almost right across the board. Now, it's only a matter of time. The market needs one more high.

Summary: It's an exhausted market getting close to top, which I now think will coincide with the US election.