Wound Up Tight – A Turning Point in History

We are witnessing a turning point in history. I can’t overstate the importance of the next couple of months to your future; to the future of the world.

The theme of this week’s blog post is “Wound Up Tight.” I’d originally intended for it to refer only to the market as a whole. I’m seeing triangles in oil, major USD currencies, and of course, the US indices. I’ll address the market and where we are currently a little further on below.

But first I’d like to talk about the bigger picture. I tend to be a big picture thinker. There are many of us who sweat the details, like engineers and accountants … and thank goodness for them, or the world would be in a far bigger mess than it is now. But my skill, if you like, is discovering patterns.

When I make that statement, I drift back to my teenage years when my father wanted me to be a doctor or lawyer and I knew (after a year of failed university) that it wasn’t my forté. There are many of us who’ve had that same kind of clash when we were young, before we really understood the importance of personality styles. Luckily, I revolted and went with my heart … and I like to think, brains (but probably not so much). [Image Can Not Be Found]

In any event, he put me through a battery of tests, but the one where I went “through-the-roof” was in “spatial” (I call it “mentally manipulating three dimensional objects in space”). In other words, being able to imagine patterns in three dimensions at various angles. So I went back to university to study television, which I eventually excelled in, because I could always envision the best short from various angles in my mind, yada yada yada (for all you Seinfeld fans). I became a writer/producer/director and have spent most of my life taking complicated subjects, breaking them down, and presenting them in the video medium.

It’s why I like Elliott Wave. I see it as a big three dimensional puzzle, for I’m constantly thinking about how a variety of assets (precious metals, currencies, US indices, etc.) relate to each other. So, I’d like to talk today about the bigger picture, what I’m seeing, and then drill down to the coming weeks, if you don’t mind.

My change in direction for today’s blog was sparked by this morning’s story of Clinton’s healthin regards to the 9/11 ceremony. She left early and because of her ongoing health issues, it’s very big “news” just about everywhere (I put the word ‘news’ in quotes due to the fact that today we have very little objective, in-depth news coverage. It’s mostly editorialized and to a large extent, manipulated).

I typically watch NBC’s “Meet the Press” on Sunday morning for a head’s up on what the US financial/political media are concentrating on. There was a news bulletin in the middle of the program and then the remainder of the show focused on this tiny story. And I thought, “Wait a minute, you’re completely missing the bigger picture!”

We often can’t see the forest for the trees. I tend to concentrate on the forest (as I mentioned above). So here we go …

Hilary Clinton represents the “old world order,” the elitists, the fraud and manipulation in society, the oligarchy in the US, and the warm-dry climate that we’re leaving behind. Donald Trump, on the other hand, is the much simpler new world that will be more authoritarian initially, but that is breaking down, much as I outlined in my post on the parallels between the fall of the Roman Empire and the US today.

As an aside, I just finished the book, “Hell to Pay, the Unfolding Story of Hilary Rodham Clinton.” It’s an unauthorized biography, a page turner, and I urge you all to pick up or download a copy.

We have the US election unfolding just as the US market reaches a top. I predict the top will happen before the election and have a dramatic influence on the outcome.

We see the world breaking down around us on a daily basis. If you’re a frequenter of zerohedge.com, the examples of this are absolutely overwhelming. A major story this morning is the voter fraud in Austria: Another example of the elite attempting to influence politics. We have a psychological war on our hands. The elite (the one percent) will lose and the revolution will take on even larger proportions. We’re “All Wound Up” and I’m expecting a very volatile outcome very soon.

I reflect back to Dr. Raymond Wheeler and his prediction of how this 500 year turning point stacks up against the previous ones:

Cycles, of course, are the things that fascinate me. Although I often cite the work of Dr. Wheeler, and how climate tends to foretell the changes in the psychological thinking of the people of the Earth, I believe changes in climate are a physical manifestation of an underlying influence over us that emanates from the same source: The Universe (more specifically, electromagnetic waves from revolving planets).

There is no question that when climate changes (we’re in the beginning of the cold-wet phase, with a larger colder-dryer phase on the way), the economy changes and so does our overall way of thinking. We are heading down the same path we have so many times before, in this case, at the 500 year milestone that I describe in my Global Cooling video.

There’s a man-made cycle that parallels the natural cycles and this has to due with elite classes taking advantage of everyone else. The natural cycles help push the man-made cycle “over-the-edge” and they reverse together in what amounts to a major social revolution. We’re witnessing the decline of the United States and the probably rising of China. The power shifts at the tops of the these cycles from West to East and back again (an observation by Dr. Wheeler) every 500 years. Over and over, it happens again and again, with money tending to be at the root of the man-made version. The Bible warns us of the dangers of money and the merchant class.

But what’s interesting about this time around, is the fact that we have the power of money interfering with the natural cycles, if you will. And that’s the point I really want to make. I see many of us attempting to justify the top of this market based on natural cycles, but I personally feel that these natural cycles have been overwhelmed by the man-made influences (central banks and their failed attempt to inflate), that are the largest in history. Human influence has had a stunning short-term effect on the outlook of the population, enough to delay the onset of the financial crash. It won’t last, but it helps explain what I’ve seen going on in the market.

The Market – The Elliott Wave Story 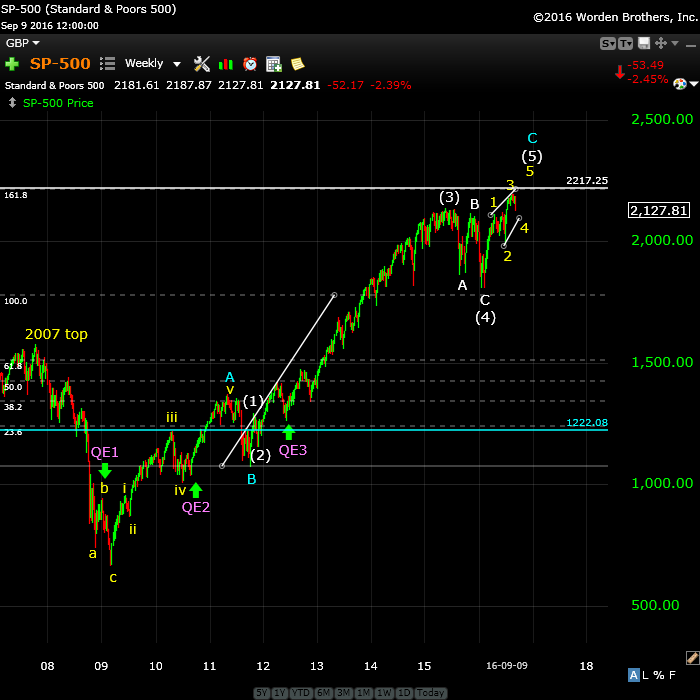 Above is a weekly view of the SP500 taking us from the top of the market in 2007 to today.

I put the top of this major cycle at the 172 turn date (18 years after the uranus-neptune conjunction: the year 2007), which is the cycle turn identified in Dr. Wheeler’s work (in particular in the Drought Clock) and that is statistically supported as a major cycle in Steven Puetz’s book, “The Unified Cycle Theory.” I talk more about this important turn in my video in “The Major 172 Year Cycle Spells Depression.”

Looking at the above chart, you can see the top of the 2007 drop on the left. The drop looks like it came down in 5 waves, which is a motive wave sequence and would usher in additional waves down—the expected crash. However the final wave at the end of 2008 was in 3 waves. Lo and behold, QE1 was introduced at the exact same time the wave changed form. This signalled that the entire wave down was now corrective and would retrace.

If you hadn’t notice that subtle shift (I didn’t at the time, as I was on the road training and not doing daily analysis of the market), you would have expected the market to turn over again and head down after retracing 62% (the blue line on the chart). It almost did, but QE2 was introduced right at that point (fall, 1010), and so the market took a new gulp of breath and headed back up instead.

So, we had central banks change the course of natural history twice to move the market in an upward direction, the most massive injection of cash and most gross manipulation of the market in history. QE3 propelled the market up even higher.

The resulting wave up from the low of early 2009 is in three waves. It’s an exquisite example of an Elliott Wave zigzag (it will completely retrace) and is ending now in an ending diagonal. We’ve had an (blue) A wave up in 5 waves, a (blue) B wave, and an even longer (blue) C wave up in 5 waves.

If you measure the (blue) A wave length, you’ll find that the top of the (blue) C wave at 1.618 X the A wave, should be at ~2217. We’re not quite there yet, but our eventual top should be around that immediate area. (I may be slightly off on this target, as this is a visual measure using a fibonacci tool that may have a bit of inaccuracy built in, but it should be minor, considering the magnitude of the rise).

What is fascinating to me is that with all this obvious manipulation of the markets, we still have a mathematically perfect corrective wave signalling a top, with the ensuing social signs all around us.

It’s a wave and a time for the record books.

Most Users Ever Online: 75