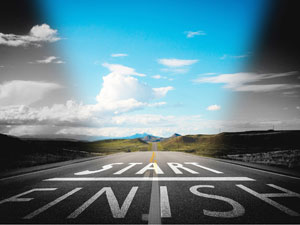 Trump’s rallies both Saturday and Sunday night had a lot of “comms” in them. We’re at the end of this phase; we’re just waiting for the final sign.

I waited until late to post tonight because Sundays are usually quite lucrative in terms of information and tonight I have a snippet that makes the wait worthwhile, I think.

I keep reading that the election is not going to happen, but messages are so “fuzzy” at times, nobody can really be sure.

However, tonight, there was an audio recording from Kim Tesla, the press secretary for the military that provided the following information:

This is as much as I know at the present time. Stay tuned to the election on main stream media on Tuesday. Things will probably move quickly. We should be into EBS by the end of the week, based upon this scenario.

There have been warnings about the power going out and the internet going down. As I’ve been saying, we’ll see Obama in tribal attire, holding an AK-47, and that will be a warning about the main stream media and social media. I don’t know if the net is going down totally, or not, nor for how long. They say it will be “paused,” whatever that means.

In the market, there’s now some clarity. The waves up on Friday were corrective and so I’m expecting an imminent drop to a new low in futures. Could be Monday, could be Tuesday, but I think Monday more likely.

There isn’t much more to say at this point. I’ve said for some time that the bottom of the B wave down from January should usher in the Emergency Broadcast System and my thinking hasn’t changed in that regard. The market is quite manipulated, it seems, but elliottwave is still true to its founder’s tenets.

I’m not a fan of the ups and downs of this market; it’s taking a lot more work trying to stay on top of it, not to mention the constant re-labelling of charts as we wander around in such a tight space. All asset classes are somewhat “pegged” to the movement of the group as a whole, and because of this, the turns in the market take seemingly forever.

It’s amazing to me, though, to watch this dance unfold; the market is moving to the timing of the ultimate transition to a new world. To me, it’s foretelling when GESARA will be announced and therefore “cast in stone” once and for all to know. It’s turning point in history that will be talked about perhaps forever. 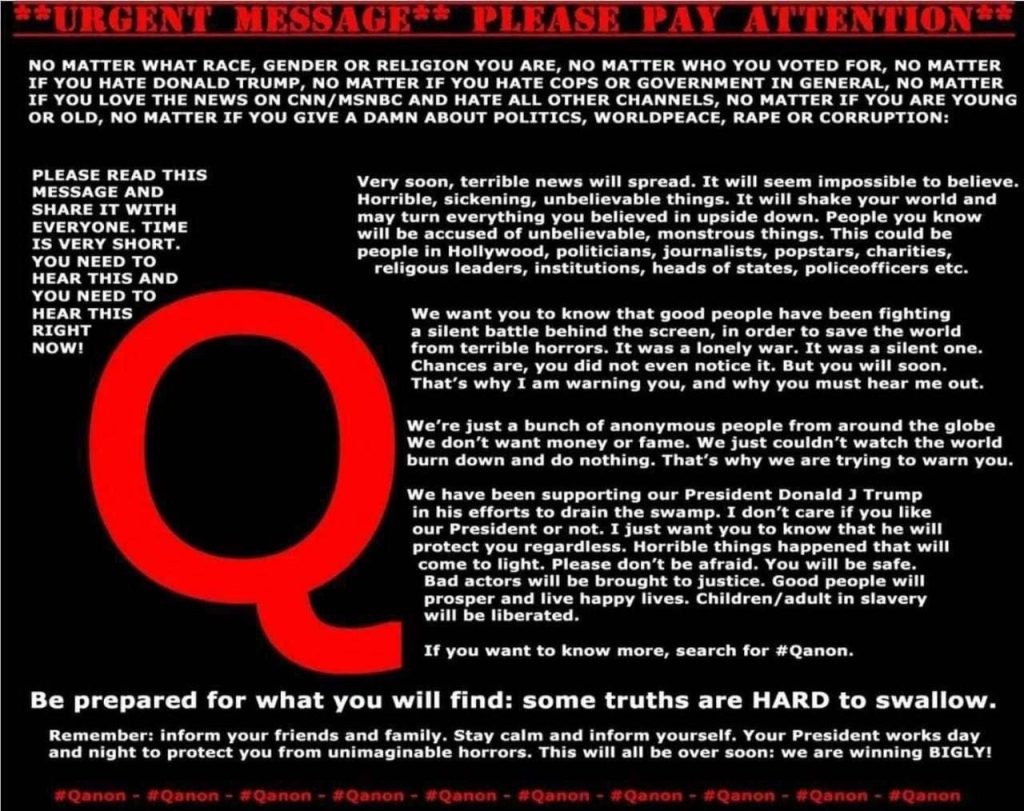 The market rose as a whole on Friday, once you back out the charts at the end of the day, it’s obvious Friday was a part of the setup for a final wave down in  futures. I’m looking at Monday as a big day, perhaps Tuesday as an even bigger day! Below is the calendar for last week, because nothing has really changed. 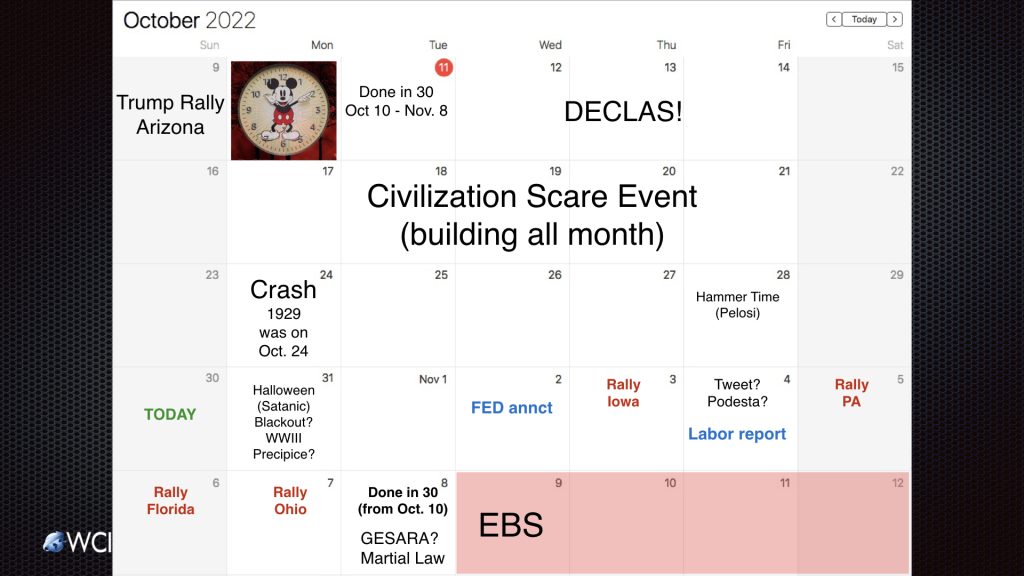 The above calendar shows the events for the past week and the remaining ones for this week that I know have to happen. Note that we have two Trump rallies left, one on Sunday night and another on Monday night.

I believe they will lead into the EBS (Emergency Broadcast System) and the Great Awakening — November 8 (or 9th). November 8 is the date I’d identified as the date of “Done in 30”) which was the Disney clock “marker” of October 10 (Oct 10 to Nov. 8 is 30 days). November 8 was also the date that Trump announced during a rally that would be the date when it would be “all over.” We just didn’t know what the “all” referred to (the STORM, or EBS).

In terms of what’s happening in the “unreal” world (the movie), we have the following possible “bombs” sitting in the wings:

There is a lunar eclipse on November 7/8 and a full moon on November 9, which may also have an effect on the market and could end up being a turning point. Note that we’re not going to see another full lunar eclipse for three years. The lunar eclipse may have something to do with the power going down (electricity).

Looking at THE STORM and Upcoming Events

We still have these major events still to go. I don’t know what the timing will be, but it will start to get obvious in the coming days, I think.

We’re now in the GREAT AWAKENING phase, but THE STORM is still underway. Some of the expected events below have happened (GREEN CHECK MARK) and some are in progress:

This is THE STORM/GREAT AWAKENING. They want you to stay at  home during the EBS period. We’re likely to see more visible signs of military. Keep stocked up for two to three weeks. Arrests will continue during the EBS playback. 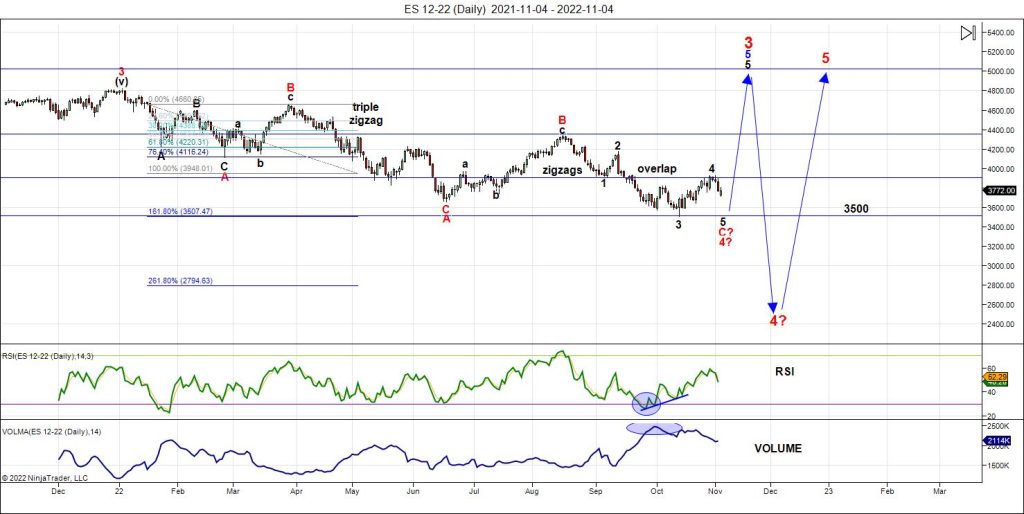 The past week has pretty much been a waiting game. Not much has changed, I see weakness ahead and at least a test of the lows (for ES, that's in the 3500 area).

This weekend, we're still sitting near the bottom of the large B wave down from early January, 2022. It's been about a month since the SP500 bottomed at about the 3500 level. Since that time, we've been struggling to rally above the previous fourth wave of one lesser degree, which sits at about 3820 for ES. ES did finally break through that level to the upside, but the waves up are corrective.

The wave structure up is corrective and RSI is failing to follow, so we're going to see some weakness. I expect a slight new low for ES and a larger low for NQ, which is much weaker.

I see this same wave structure right across the market, in every asset class. For some, like gold and silver, it's clear we haven't bottomed. For oil, we rose this week, but the recent waves up are in three waves, which is also corrective.

DXY, down from a high on Friday is what "looks like" a motive wave is still in three waves, however. The waves before Friday's, down from the very top, are corrective, so my bias is for a retrace to the top of the third wave before we finally see a very large fourth wave to the downside. (DXY moves counter to equities at the present time, so this telegraphs weakness in futures.)

Intel in the Telegram app is more than hinting at an impactful event imminently, perhaps early in the coming week, that will bring the market back down. There are hints of other events lining up this week that may also have a major impacts on the market.

The bigger picture for futures (after a confirmed bottom is in place) is for a turn up in a final C wave to an all-time new high. A large rally would run parallel to this being the most positive time of year (US Thanksgiving, Christmas). I think we're likely to rally right through until January. January is almost always a weak month and one that can spark a crash, which is what I'm ultimately expecting.

We could see a top earlier than January, but we have potentially 2500 ES points to go to my measured top of almost 6000 (1500, at least to a new high, which is required).

Outside the market, we're sitting at a nuclear standoff (part of "the movie") and it seems to be reaching a climax. Trump is apparently NOT going to be arrested, so it's likely a large blast would trigger a the near extinction event, which may culminate in the lights going out worldwide, the electrical switchover, which would immediately bring in martial law. So, we're very close to the end for the Cabal, and we're on the verge of seeing GESARA declared.

Last week, Nancy Pelosi was arrested. There are hints of even more important arrests on the new horizon. Last week was eventful and Trumps four rallies, which we're in the middle of, are putting out lots of coded intel. The truth continues to surface in main stream media, bit by bit, but the bits are getting bigger!

The announcement of GESARA will shut down governments, courts, and police worldwide and bring in natural law throughout. It's a major milestone.

I don't know how all this will affect trading, but be aware that we could face some internet disruptions. Military intel has, in fact, told us so.

I've said for months that once we reach a low, or at the very least, start heading for a low, the Emergency Broadcast System won't be very far away, and that's still my thinking.

Summary: ES and NQ are at pending bottoms with a trend change on track but not confirmed. A confirmed bottom would complete the 9 month-long B wave down from early January, 2022.

Once a confirmed bottom is in place, I'll be expecting a turn back up to a new all time high in the final fifth wave (or C wave), perhaps targeting the 6000 level for ES.

Once we see a final fifth wave top, I'm projecting another major trend change — a dramatic drop to a new low under 2100.