Nearing the End of the Road 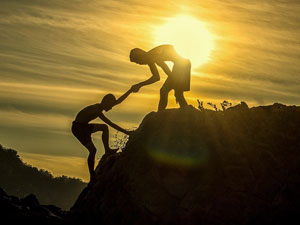 Everything now is quite quickly coming together with the recent rally in SPX. With a little more work over the next week, we can expect a final top of the extraordinary corrective third wave up from March, 2020.

The final top and turn seems to be aligning with the expected announcement of GESARA, the triggering of the Emergency Broadcast system, ten-day, round-the-clock video playback, a debt jubilee, and so much more.

As I’m been saying for some time now, the market continues to move to the timing of the work of the US military and Allied Forces and their work in freeing the world of the tyranny we’ve experienced for so many centuries. It will also end the horrific practice of child and female sex trafficking that has gone on under our noses for generations.

Although somewhat speculative, below is a calendar that may actually have some merit. The timing is primarily based upon what the market is telling me. As i have said so often the market is a mathematical representation of the mood of society. Tops and bottoms trigger social and political events, not the other way around. 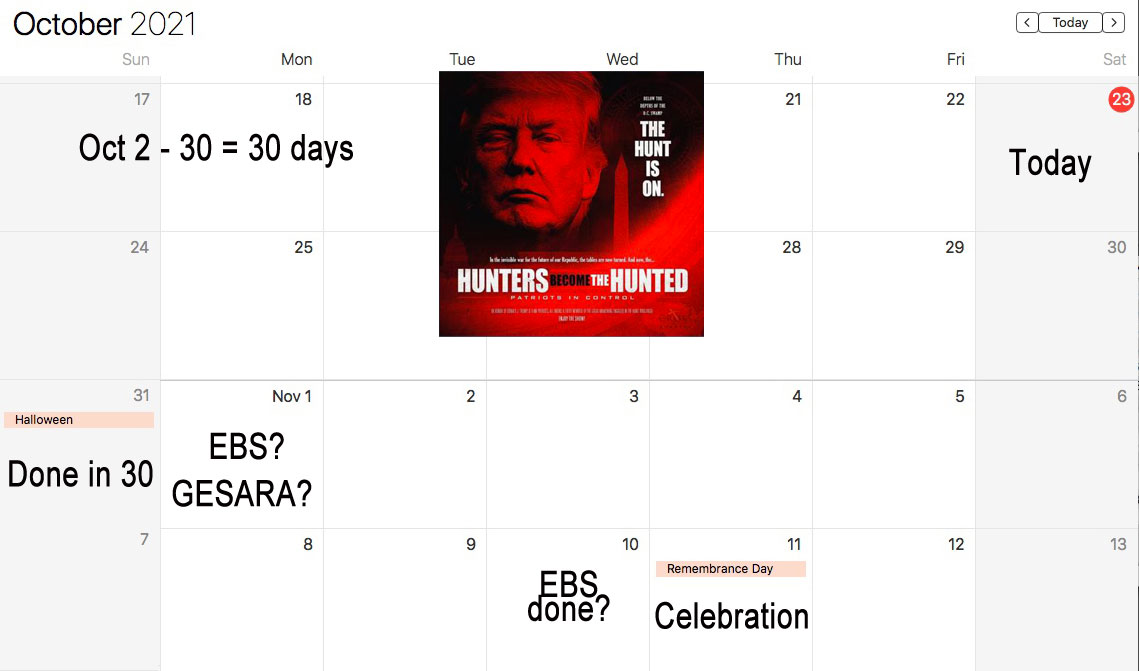 We’re currently in what the Q Group calls “Red October.” It’s the final hunt for the remaining Deep State and all those who have perpetrated crimes against humanity. The most vile conspirators have been captured and dealt with; it’s the order-takers and people who have continued the scam, having been paid to do so, that are the focus of this final stage.

Red October began on October 2 and the Q Team said it would last 30 days (“done in 30”). That takes us to October 31. There’s supposed to be a large celebration on November 11, so the interim ten days would be a logical time for the the Emergency Broadcast System to trigger with a coincident shutting down on Earth during that period. I would expect GESARA to come in near the start of EBS. 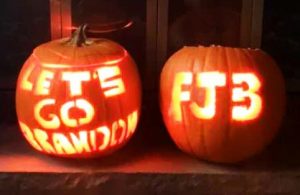 As a result, I think we have another week of work before we see the final turn down in the market, which also fits with my expectations for the market itself.

We also have a lot of events that still need to unfold (this coming week?) and I would think that those events (listed below) will happen before we see the EBS and Great Awakening.

GESARA coming in will take down the market, as it involves the eradication of all debt worldwide.

The one caveat that’s obvious to me here is that we still need the transition from the Gregorian to the Julian calendar to happen. That involves add back the ten days that were taken out of the calendar in 1582. It would make sense to me that this will happen about the beginning of November, if not on the November 1st date. The EBS playback may well happen within those ten days, resulting in us “re-living” the beginning of November.

There are lots of bits and pieces we don’t know. If the above speculation is to come to fruition, then I would expect to see the dam break this week, along with the WWII scenario play out, which will involve the destruction of the 34 satanic buildings. There’s lots of document declassification to come and a number of public deaths to be brought into the light. It should be an interesting week …. once again!

In the meantime, here’s a video that nicely sums up the visuals you’ve been seeing as part of the movie you’ve been watching:

To watch full frame on Bitchute

We’re already in “The Great Awakening” part of the process, but THE STORM continues (flooding, arrests, audits …). There’s so much going on that’s not obvious to the general public.

There’s also muchmore to come and so much you’re likely not going to believe at face value. I think it’s going to take a long time for everyone to cast off the lies we’ve been living under all our lives.

The market this weekend looks like it required one more small fourth wave down and a fifth wave back up to a slight new high. I see that probability across the market. Then we’re looking for a trend change to the downside, the big drop I’ve been promising for such a long time.

The near future looks like it will be a lucrative one, no matter the timing of the “great reveal!” I’m excited about the promises of the November 1, 2021 period.

This is a survivor of the Satanic ritual abuse that has gone on in Buckingham Palace. We’re waiting for the announcement of the death of the Queen any day now. It’s important to know this information.

To watch full frame on Bichute

This is what we’re fighting. This is how horrible the world is that we’re leaving. It’s important to get the word out an wake people up. It’s all about the kids. It’s always been about the kids. When Trump got elected, he swore he would end it all.

We’re almost there. Hang one. We have one chance at this and we will win! In fact we have already won. Now, it’s just a matter of time until it all comes out.

This fight is biblical.

The final wave up that's traced out over the past two weeks is the strangest I've ever seen as a final wave up. My take is that's it's trying to do two things. In the DOW, which appears to be in an ending expanding diagonal, it has to be corrective. In ES, it should be somewhat motive-looking, but since we're in the final wave of a zigzag. That's contrary to what Bob Prechter wrote in his book: The final fifth wave of a zigzag doesn't have to be in a motive five waves. It can be, but doesn't have to be.

I still don't know how to label this one, but I'm not going to worry about it. It's the finishing fifth wave of a huge third wave zigzag up from March, 2020. I'd originally said this third wave up was corrective very soon after the bottom was in, but got attacked for it many times, similar to my work on climate, and the current revolution we're undergoing. I guess I'm just a black swan ... lol.

Nonetheless, because the entire wave up from March 2020 is a zigzag, it needs to be completely retraced (to the bottom). This wave also supports my thinking about the final pattern we're in: I believe it's a "broadening top" (not an Elliott Wave pattern), or in EW terms, an expanding triangle. This points to another error in Prechter's work, as I believe an expanding triangle is a terminal ending pattern, rather than a typical triangle, which continues the trend up out of the triangle (in a bullish market). I've never seen the latter, and Prechter didn't provide a real example in his book.

Back to our position this weekend. We're not quite done with this top. It looks like we need a small fourth wave down and then a final small fifth wave up to a slight new high. That may take us the coming week and get us lined up for a turn around the beginning of  the next  week (Nov. 1).

This date may also aline with the beginning of GESARA and the trigger of the Emergency Broadcast System. In that case, we have just a little more time to go.

Summary: On a large scale, we appear to be in a broadening top, going back to 2018. The wave up from March, 2020 has been a zigzag, as expected. It will completely retrace to the downside. We're in the final fifth wave of the C wave of the zigzag; this final wave has not conformed to normal expectations for a final wave of a typical zigzag sequence. However, the entire move up from March 2020 is almost complete. We appear to have one more up/down pattern to complete the year and a half rally.

The covert military operation that's been in action the past five years is also coming to an end. With that phase of operations ending, we have ahead of us a large fourth wave drop which will probably align with the debt jubilee, announcement of GESARA, and the start of the Great Awakening (EBS).

I'm expecting a retrace down of over 2000 points in SPX. Once we've reached an area below 2100, we'll have a long climb to a final slight new high in a fifth wave of this 500 year cycle top.