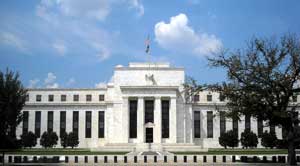 The Fed is Delusional

This week at Jackson Hole, Jerome Powell attempted to justify his continuing pipe dream of a 2% inflation rate. He also tried to paint this scenario as a “good thing.”

It would be a good thing for central bankers (!), as it allows them to keep stealing our money. However, it’s a long way from reality. A deflationary environment, as I’ve maintained for a very long time, lies dead ahead. The US Dollar is about the turn to the upside for good (or at least, for the foreseeable future).

DXY, the US Dollar Index, which has been in a bottoming process for the past few weeks, now has the final wave of an ending diagonal to complete. That means one more low (watch for pundits to once more herald the end of the dollar).

Ending diagonals are ending patterns and warn of an impending trend change. We’ve known it’s been coming for a long time, because the wave down February of this year is a corrective, second wave. It predicts a turn a back up into a protracted bull market with five more waves up to new highs. That’s most definitely deflationary.

That’s not good for either silver or gold.

There are ending diagonals in other USD currency pairs, in AAPL, for example, and in other assets scattered throughout the market.

This trend change is going to see virtually everything turn together and could be quite a “show.” However, it will pale compared to the eventual market collapse, which I don’t see happening until next year.

This has prompted me to update my long-term charts for NDX and SP500, which you’ll find below.

Also note that the webinar playback from this past week (Elliott Wave Basics) is below as well. It’s a link to the Youtube version, which allows for stopping and starting.

Lots in this report this weekend. We’re finally ready for the balance of this 500 year rally to top out. 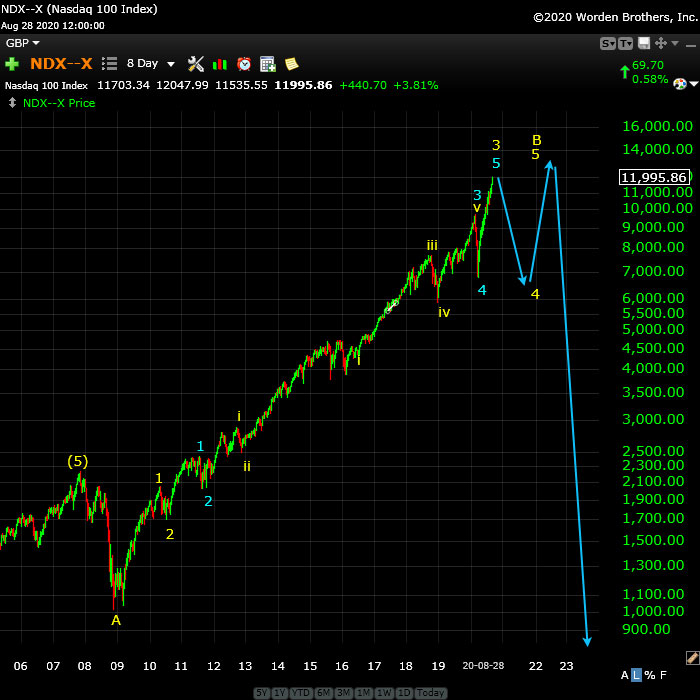 Above is the 8 day chart of NDX. The yellow circle 5 on the left bottom denotes the cycle high, which was in 2007. Then central bankers weighed in a injected a huge amount of debt into the market through the banking system. This created an “unnatural” B wave, which we’re never supposed to have, according to Bob Prechter’s book, the Elliott Wave Principle (this was a change he made to Mr. Elliott’s original work).

However, here we are. It’s a corrective wave, and since we’ve never seen one of these B waves at the top of a market before, it makes it more difficult to analyze, more so for the SP500, which has a much more complicated pattern (below).

In any event, for NDX, we’re still looking for a fourth and fifth wave and they’re denoted by the blue arrows. When they’re done, the market is going to give us the show of a lifetime (or several of them — lifetimes, that is). Then it will be time to be prepared for the aftermath, a very long depression, and civil war around the world.

I put us at the top of the third wave, and that’s why it has been somewhat relentless. 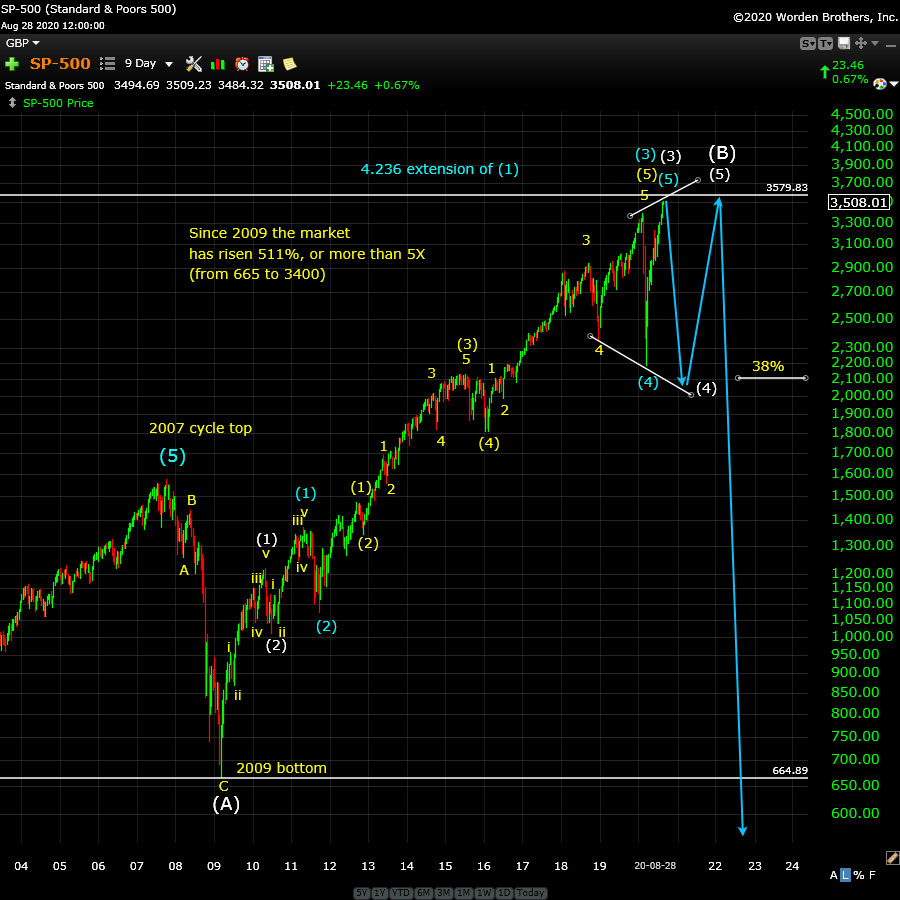 Above is the 9 day chart of the SP500. This is a much more complicated chart than NDX, but puts in the same place, expecting a final large fourth and fifth wave.

I did not expect the current wave to end up being an intermediate third wave (due to not appreciating the importance of the while circle 1 wave set. Again, this is a B wave up from 2009, which makes this market an anomaly.

To back up the current count, you can look at a stock like AAPL and see that it’s clearly at the top of wave three (in an ending diagonal), which means it also has a large fourth and fifth wave to trace out to a new high.

Third waves are blow-off waves, fifth waves are not, and that’s why this current rally has been so relentless.

There are ending diagonals all over the place now as this extraordinary B wave up from 2009 plays out.

As I've said many times before, the 516 year cycle top was in 2007. The market started down and bottomed in a corrective in early 2009. "Quantitative Easing" had already begun, with central bankers injecting huge amounts of debt into the banking system, which helped inflate the US Dollar and send the markets to unbelievable new highs — the largest bubble in history.

Ralph Nelson Elliott believed we could have "unorthodox" tops in a market, but Robert Prechter thought otherwise and said so in his book, The Elliott Wave Principle. Wrong.

There are a lot more errors in the book; however, I don't consider that a negative, because, if you believe Elliott Wave is a science, you know that science gets refined over time, as we learn more about it.

Now, we've confirmed that B waves are indeed possible, but nobody's ever seen one before, so it's made this new phenomenon at times difficult to analyze. For example, the current wave up is a "five" and looks motive, but it's not; it's corrective.

We also don't new highs in other US indices, and most certainly not in the NYSE exchange. You'll also find that stocks are in a third wave, mostly notably Apple, which is at the top of an ending diagonal. Ending diagonals are ending waves and predict a trend change, when complete. It's more or less complete.

Apple's not the only asset sporting an ending diagonal. You'll find them in currency pairs like CAD and AUD, and particularly the US Dollar Index (DXY). This predicts a dramatic trend change to come.

A trend change across multiple asset classes (and international exchanges) is imminent. There's a full moon on Wednesday, which may be important for the timing of the trend change.

We appear to be in a kind of broadening top formation (not an EW pattern), with a series of fourth and fifth waves playing out. We have an fourth down in place from 3400, a fifth wave up to slight new high above that same level, but now we have a larger fourth wave down to below 2100. There are several possible measured objectives below that point.

These highs are not supported the the NYSE exchange, which has a more muted corrective wave up, but not to new highs, similar to the Russell 2000. There are different counts for different indices, which makes the US market quite a mess, and can be difficult to understand from a technical perspective. It's a sick market, kept aloft by animal spirits and "funny money."

The coming descent should be a fourth similar to the previous one, and will likely be a combination pattern and, as such, may contain zigzags, flats, and possibly a triangle or ending diagonal at the bottom. However, I lean towards another series of zigzags, which are corrective waves.