To Turn or Not to Turn? 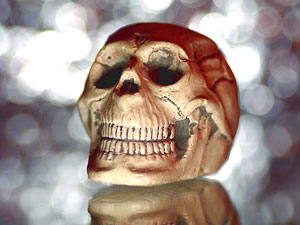 “To be or not to be?” is William Shakespeare’s most often quoted line, and is uttered by Hamlet in the third scene of his play of the same name. He’s at a turning point, contemplating death over life.

It’s often thought that he holds a skull in that scene, as he unveils his inner thoughts on suicide, but that’s in fact, not he case. He holds that human skull two scenes later. Ah … we have selective memories.

The market is also at a crossroads this weekend, contemplating what direction to move. Are we watching the death of this five month extraordinary, Federal Reserve-fueled bull run?

I see a mixed market, with some asset classes (and several assets within those classes) having already changed trend (although in the very early stages, and not yet confirmed technically).

“To turn or not to turn?”; that is the question.

That being said, the chances of a top being in place in the US indices is quite good this weekend.

Ending diagonals are ending patterns and stipulate that once the fifth wave of that diagonal is in place, it marks the end of the current trend. We saw the top of the ending diagonal on Wednesday of this week in both SPX cash and futures, and then we had a test of that level on Friday. I have a full Elliott Wave count in these indices.

The NYSE “mother exchange” looks to me as though it’s already topped, although, with all the gaps in that exchange speak to the necessity to wait for a FULL first wave and second wave combination before getting too excited. In any case, I can provide a case for a top already being in place.

DAX also may have topped, but both these exchanges require confirmation of that top; it’s a little bit early in the process to be sure. It looks like we’re at the top of the second wave.

DXY (the US Dollar Index) appears to have changed trend and the related USD currency pairs are showing signs of a top in place, but again, nothing technically confirmed. I still don’t have a first wave in the pairs; however, I do have one in DXY.

Gold and silver are still questionable.

Oil appears to me to still require a stop, because the waves down appear to be corrective. We could see that top over the weekend or into early next week.

NQ is at a top, as well, although the pattern is very different from ES.

This weekend, I’m looking at tops potentially forming in AAPL, AMZN, and FB. AAPL sits at the top of the final 5th wave of an ending diagonal this weekend, right at the measured maximum level (500) that this pattern allows. AMZN is at a potential double top.

Overall, the market is mixed this weekend, with more and more punditry hitting the airwaves: The dollar is dying, gold is going to 10,000, Apple hits the $2 trillion market cap level. All this news on market extremes signals a change is due. I see the signs everywhere.

In summary, I see potential tops in place in some asset classes, but not in others. We need to wait for confirmation, but it seems it’s close at hand. The next few days looks to be very important.

Ending diagonals can sometimes drop after the fifth wave and then return to test that level. That appears to be what happened near the end of the day on Friday.

Looking at AAPL and AMZN, you can see they're also at important tops. NQ is in a final fifth wave subwave and has only a test of the current high left.

A good look at the NYSE exchange looks like it's already topped and may be in a third wave of the first heading down. This needs confirmation.

Then, there's the important "contrarian info" on short interest: At the start of August, the median S&P 500 stock had outstanding short interest equating to just 1.8% of market cap, the lowest level in Goldman's 16-year data history.

DXY (the US Dollar Index) appears to have turned, as have EURUSD and AUDUSD. USDJPY has also changed trend, it seems, and although USDCAD may have changed trend, it's too early for confirmation.

DAX seems to have turned weeks ago, but also needs confirmation with a new low.

Gold and silver are debatable at the moment, because the waves down aren't giving any clues, but I'm expecting a top in the very near future.

The big picture pattern for the US indices in general seems to be a broadening top, so the new high by the SP500 (much higher relative to it's mother, the NYSE) seems to have little meaning from a technical perspective.

Everything points to a turning market ...

We appear to be in a "combination" fourth wave down from the 3400 area. We have an A wave down in place from 3400, a B wave up almost to that same level, and now we're about to complete the C leg down to a new low below 2100. There are several possible measured objectives below that point.

The balance of the drop from February should be a combination pattern and, as such, may contain zigzags, flats, and possibly a triangle or ending diagonal at the bottom. However, I lean towards another series of zigzags, which are corrective waves.