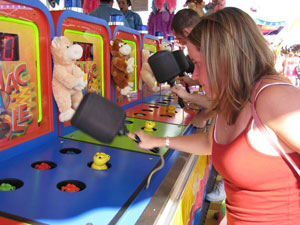 This market is toying with us. Getting a top in place is like herding cats, or like Whack a Mole!

“Whack a Mole” is a concession-stand game at fairs in which a player tries to “whack” plastic mole-like replicas with a rubber hammer as they randomly pop up from holes in the game surface: Fun at a fair, frustrating in the stock market!

Everything is so close to a top, but when several cats (asset, or often whole asset classes) make it to a new high and one’s out of line, everything tends to drop back and then they try again.

In the “market world,” we’ve had a couple of weeks of up and down waves across multiple asset classes. In the US indices, these are the final waves before a trend change.

On Thursday of this week, ES, in a small ending diagonal, missed a test of the previous high by one point. That was the big tease! But, at that point, not all asset classes were completely lined up for a turn. So … we retreated … again.

As of this weekend, the US Dollar Index (DXY) appears to have bottomed, as we now have 5 waves up to the previous fourth wave and we’re currently near the bottom of a second wave. The turn in the US dollar will lead us into a deflationary environment, which I’ve forecast for several years now.

My recent initiative, Thrive Academy has video and written explanations of deflation and how to navigate the changing value of fiat currency. It’s important you understand the financial environment we’re moving into; it will change the value of currency, and assets. More on that, below.

In terms of other USD-related currency pairs, EURUSD has a set of 5 waves down and is also in a corrective second wave. DAX (the German exchange), which I follow, also appears to have topped.

Gradually over the next few days, I’d expect the US indices to turn into a new downward trend. This weekend, we’re closer than ever to having everything lined up, and now that the US Dollar has presumably turned (it’s a little early from an Elliott Wave technical perspective to call a trend change), I would expect to call a trend change before we’re halfway though this coming week.

The mood within society is already quite negative. It will become even more negative as this expected 1300 point drop in the SP500 nears the bottom.

The internet is a-buzz this weekend.

There’s a video being promoted on the internet of a drive through New York City, where you can see store after store boarded up on 5th Ave., in Manhattan.

There’s another video, entitled, Shadowgate that exposes the Deep State artificial intelligence gathering (carried on both RT.com and Zerohedge.com), while there are rumours that President Trump may pardon Edward Snowdon.

We’re expecting to hear from the Durham team as indictments come down in the Russiagate affair, and there’s been one indictment handed down already.

And, the truth is starting to come out about this Dr. Fauci character, who was head of the  NIH when it declared in 2005 that hydroxychloroquine “is a potent inhibitor of SARS coronavirus infection and spread.” Here is the latest open letter from a group of renowned doctors in the United States.

Things are heating up! With the US election not that far away, we’re likely to see as much volatility in the real world as we’re going to see in the stock market.

Even if you can’t make the actual event, you’ll be provided with an video playback link (with no expiration date) so that you can review it at your leisure. A direct youtube link for the playback will also be offered, so that you can play back, stop and start, etc. 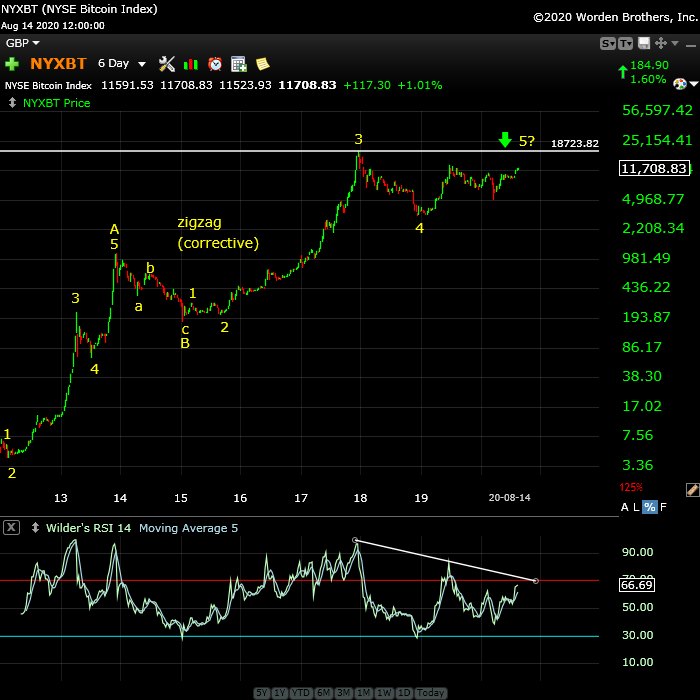 Above is the  6 day chart of the NYSE bitcoin index. I consider bitcoin a “bubble on top of a bubble,” the stock market overall being the “foundational” bubble bitcoin sits atop. That’s because the technicals are warning that we’re in a final wave (see the RSI indicator at the bottom, which is showing major divergence, which you always get at a top — it starts to show up in the final wave).

The pattern up from the bottom is a zigzag, which is a corrective wave and will eventually fully retrace. It looks like we could get a top with the top in the larger market. In any event, it appears close at hand, relative to the overall pattern.

Bitcoin is like a fiat currency. It’s digital, with nothing of intrinsic value to support it. It’s certainly not money, but if you own some, you no doubt think it is, and its success depends greatly on others thinking so, as well.

There’ve been lots of bubbles in the past of a similar nature. Bubbles always burst.

On Thursday of this week, SPX almost tested the previous high, but in the case of ES, it missed by a single point. Ah, but it just so happens that oil was not in a topping position. So, SPX dropped again and we're trying to get all my (almost-herded) "market cats" at their respective extreme levels to allow for a trend change together.

As I mentioned last week, all these players have to reach new highs (or lows, as the case may be) and then turn. This relates to asset classes, not individual assets, of course.

We're all so close now, except that oil still needs a new high still, it appears.

DXY (the US Dollar Index) appears to have turned, as have EURUSD and AUDUSD. USDJPY has also changed trend, it seems, and although USDCAD may have changed trend, it's too early for confirmation. Gradually, all my market cats are falling into line and changing trend. The US indices may well be next, as they're very close to tops and have run out of fourth waves (the wave that the market likes to fall back into before it finally tops).

I can't tell you the turn day, but it's a daily vigil now.

Gold and silver appear to be in fourth waves, but I don't suspect they'll top at the same time as the US indices.

The warning from pundits continues and more and more articles in mainstream media are warning of turns in previous metals and the US Dollar. Well, they're actually saying the opposite, but that's the usual contrarian sign I look for. As soon as it hits the news, you can bet it's going to turn.

I showed the wave structure for the USD Index last week, with a very obvious resolution close at hand (this weekend, we sit near the bottom of a second wave. A new high will confirm the top is indeed in place.