This market is toying with us. Getting a top in place is like herding cats.

Everything is so close to a top, but when several cats (asset, or often whole asset classes) make it to a new high and one’s out of line, everything tends to drop back and then they try again.

This weekend, we have DAX that looks like it’s got a top in place. However, it’s only dropped in three waves so far and the fourth sideways wave is warning that the top may not actually be in. We need five waves down to suggest a top has formed and then three corrective waves up to around the 62% area to confirm one.

We only have three waves down as of this weekend.

Oil has done the same thing. It’s come down in three waves after teasing us with a small double top and a wave that broke the upper trendline of the ending diagonal. So, in fact, it could go right back up to a new high, or larger double top.

The US Dollar Index also rallied from a new low, but did so in three waves. It needs a new low. It’s possible the current pattern is an ending diagonal, which would be good in that ending diagonals are ending patterns and would definitely mark a final low. However, a timeframe is something I don’t have.

Futures are close to final highs but ES may have an additional fifth wave that has to play out. The NYSE and the Russell 2000 are at new highs.

So, overall, we’re exceptionally close across the board, but everything has to get to a new extreme together to turn down. A tedious process, I know, but that’s the challenge.

It will be obvious when it happens and it lowers the risk of a short entry at the top, as the upside is next to nil at this point. We just need a final top from all my stray, somewhat feral cats.

DXY (the US Dollar Currency Index) 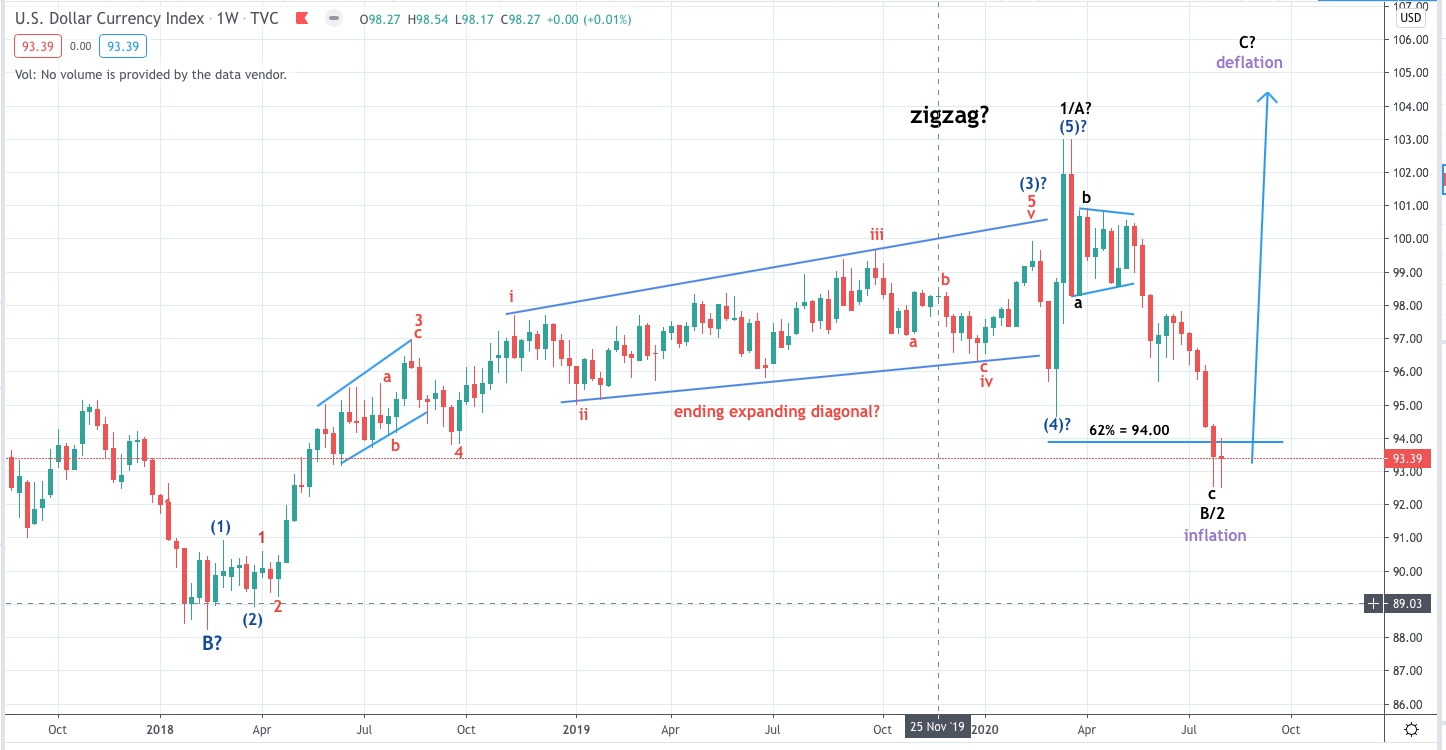 Above is the weekly chart of the US Dollar Index.

The US Dollar Index (DXY) is very closely aligned to the movement of the US indices (and I believe, as the reserve currency, it’s leading markets internationally).

Late in the week, DXY dropped to a slight new low and then bounced. We’re in the process of bottoming and the pattern (as of Friday) might be an ending diagonal (on a 30 minute chart). All the currency pairs are very close to turning points and it’s a day to day vigil, searching for a top for the larger market, a bottom for DXY.

The current turn up is corrective, so we don’t have a bottom in place yet. If we have an ending diagonal pattern forming, it will seek a new low for the final wave down and then turn up dramatically. We’re going to have to wait and see.

On a larger time scale, the turn from the 62% retrace level should result in another, but much larger, set of 5 more waves to the upside (we have one set of five waves up already in place, with the beginning in early 2018 at the 88.00 level (roughly).

That being the case, as DXY rises, we’re going to head into a deflationary environment (in  conjunction with the drop of the 4th wave in the US indices). This is something I anticipated, but I expected it to happen once the US indices had reached their final highs, anticipated in the early part of 2021.

Last weekend, I noted that "We're at extremes just about everywhere, except perhaps oil." This week, oil finally topped by poking its head above the upper trendline of an ending diagonal. However, the C wave down this week, is corrective and we may have one more visit to the top — either that, or a retrace of just that C wave to the 62% retrace level.

As I've said before, finding this top is like "herding cats." All these asset classes need to start from highs in order to turn down, and you get several of them in place, with one cat out of alignment ... then they fall back and try again.

We're very close to having the herd in place, but it's now (DXY) the US Dollar Index that should provide the trigger. It reached a new low by a few cents, then backed off in a corrective wave; it needs another, final low.

On the US indices side of the equation, NYSE and the Russell 2000 were at double tops on Friday, and we wait for the pack to all be in place for the turn.

It's a tedious process and we're on a day-to-day watch for a turn across multiple asset classes, and, in fact, international exchanges.

Futures are probing new highs, but I don't expect there's much more left in that tank. My count is full, except for a final small sub-wave. We're looking for a first set of five waves down, and then a second wave retrace.

All this week (again), we had the pundits talking about the demise of the US Dollar and the expected gold rally into the stratosphere. These are sure signs the opposite is about to happen.