The wait continues while the bankers play.

Central banks were hard at work this week — the Federal Reserve with its ongoing monetizing of debt and on Thursday, the European Central Bank injecting another lump in QE into the system.

It will all prove to be too little, too late.

And then there was the labor report. Well, we’ll see longer term if that piece of work holds up (I see a big adjustment coming up at some point).

My work this weekend tells me we’re not done with this top. I’d been hoping the Moon and eclipse, along with the labor report might help us achieve a turn. I haven’t given up on that scenario; however, with a Federal Reserve announcement due this coming Wednesday afternoon, and the state of the sub-waves, my bias is that we’re going to stay elevated for a few more days.

In the meantime, of course, I get the usual emails that tell me I’m wrong and the market is going to new highs. By “the market,” most of these emails tell me it consists of the SP500 only. Most people don’t look at anything else, which, in the current scenario, is a blueprint for failure.

So, I put together another “big picture” video (it’s short) just below to give you the scenario between the NDX and SP500 that is causing this extreme rally. Whenever we get these extraordinary events, it typically sends me back to do my homework to make sure I haven’t forgotten where we are. It may keep the emails at bay for another 24 hours …

The other thing I should point out is that people are talking about a V shaped recovery (no such thing, in my experience), the pundits are talking in the news about this market continuing up, and Donald Trump is touting the unbelievable numbers as gospel. Right … there were 345 new businesses created during the lockdown!

And what would “reality” be without Peter Schiff telling up gold is going into the stratosphere sometime soon. Keep your eye on the ball, and lock out all the crap — that’s my mantra at the present time.

All good contrarian signs that a top is near. 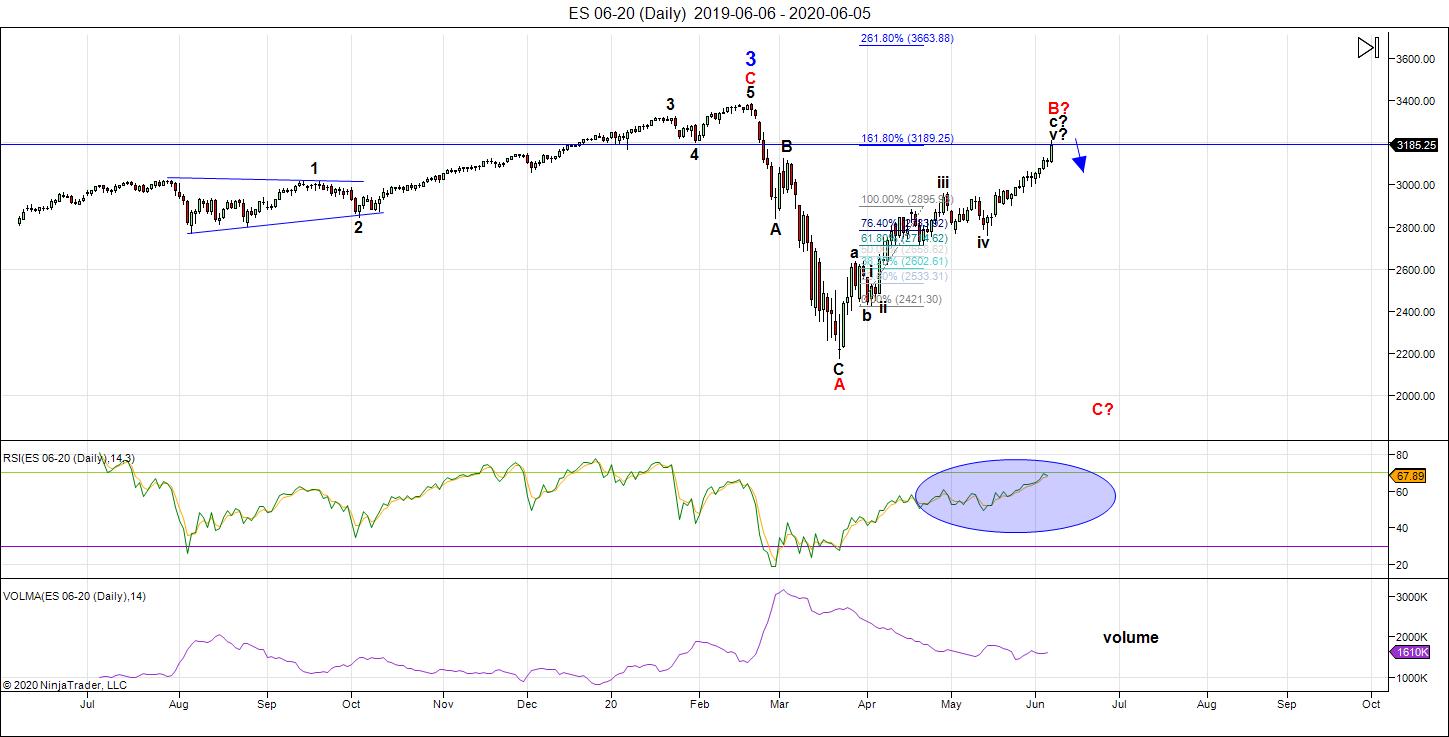 Last week, we were in what I referred to as "the last leg" of this rally, a fifth wave. That wave, because the market is fractal, has five subwaves. The final fifth wave ended up being somewhat of a "blow-off wave," rallying 100 points. It was unexpected, as I was seeing signs of weakness across several asset classes.

The bulk of that rise was due to the US labor report on Friday morning, a report that, based on recent circumstances, made no sense at all. 345 new businesses created during the lockdown? C'mon.

While the US futures and cash indices rallied, other asset classes were much quieter.

On Thursday, the ECB injected another round of QE into the system and EURUSD shot up (which US futures moved to the downside). On Friday, the opposite occurred — weakness in currencies, while we had a rally in futures. It's a dangerous topping process, this one.

The good news it that now ES is up against a measured fibonacci level, which (finally), gives a more reliable indicator that a turn is near. The C wave up of the correction in ES is  1.618 X the length of the A wave, a typical length for a C wave on the verge of turning.

The SP500 also now sports a fibonacci relattionship, but it's a bit more complex, and not nearly as obvious.

On top of that, the count of the final fifth wave in ES is full. Now, it's a case of waiting for confirmation of a turn, and that will be across multiple asset classes and international exchanges.

There's a Federal Reserve meeting announcement out Wednesday and that could keep the market elevated into the middle of the week.

As I stated last week: There's a lot of manipulation going on (the Federal Reserve is doing whatever it can to prop up the market with more debt — a very stupid idea, and you and I will pay for it in the end. Inflation through the extraordinary "printing" of debt has had its affect on the market overall. However, the problem is simply too humongous (the dollar is worldwide) and the Fed will fail. We're getting close to seeing the result, which will be spiralling deflation.

Summary: We appear to be in a "combination" fourth wave down from the 3400 area. After the first set of zigzags down, we've retraced well over 62% of the distance from the top. We've been sitting in this corrective ABC retrace for two and a half months. However, we're sitting at a potential topping level.

Once we top, another set of zigzags down seems to be the most probable outcome for the journey to a new low, but it's early to be sure of the pattern.

Look for a new low below 2100: There are several possible measured objectives below that point. The timeframe has moved to July timeframe (speculative), perhaps, for a final fourth wave low.