Calm on the Surface 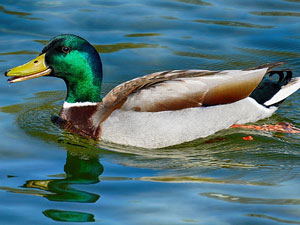 Lots Going on Beneath the Surface

There is A LOT going on in the “unreal world” right now, but there’s much more going on beneath the surface — that’s not being reported.

In any case, news on the election fraud is starting to overpower the fake news sites. More and more people are becoming aware of what’s really going on; there are more and more lockdown protests around the world. There is at least an equal and opposite reaction coming … and “dominoes are about to fall where they may,” as the expression goes. That’s referring to an expected reaction by the current US government to the attempted overthrow that’s in progress by the globalists (the World Economic Forum is the facade, but there are other major players).

We’re in the midst of a cyber war — the age-old struggle between the one percent and the ninety-nine percent. The latter always wins in the end. We always have to fight for out freedom. We’ll retain it, but not without a lot of pain along the way.

The media landscape is changing rapidly. My news sites of choice are:

That last one (natural news) gives you a deep dive into Trump’s trap for the Deep State that was unleashed in September, 2018). Stay tuned, as I’m expecting an epic reaction that will shock most of the world.

Below is a short video explaining the executive order of September, 2018.

For video clips, it’s Sky News in Australia, and Newsmax. There are still some untouched islands on Fox News, but they’re few: Tucker Carlson, Evening Edit, but the network has suddenly shifter towards blatant lies, in some cases. There are also alternative video sites, like Brighteon.com and bitChute.com. And Parler seems to be taking off in the tweeting world.

The markets have been very quiet (14 days of sideways in ES), but it tends to be similar to my experience babysitting at a younger age. When the kids are quiet, it usually spells trouble.

We have some volatility coming in the markets (finally) and I expect similar amounts of volatility bubbling up for the United States. We’re in the middle of a global attempt to take down the United States, and with it, other western nations, most obviously, Canada, Australia, and the United Kingdom. Europe is also under attack.

However, recent changes in elements of the US government suggest that it’s only a matter of time before many of the “bad actors” are exposed and eventually, jailed. You’ll find a lot of the background to what’s really going on by spending some time on the Naturalnews website (link above).

ES has now gone sideways for 14 full days in a  set of waves that is almost at a previous high. Reaching it should result in a turn-down. I’ve been able to call all the minor turns along the way to this point, but this is more of a day-trading market at present. I believe that will change this week.

What I’m looking for now is a drop of at least 200 points in B wave in ES and NQ to complete the E leg of its contracting triangle. We’ll have one more wave to a new high after that before we have a major trend change to the downside. I’m unsure when we’ll see that major turn — it could be before Christmas, but my sense is that it may be closer to the beginning of the year.

The top of the third wave of the five waves up from the early 1900s topped in the late 1960s/early 1970s. It’s always a volatile time when there’s a major trend change. Although the late ’60s promises to be less volatile than the current topping process, it certainly brings back memories of the Vietnam War protests, Woodstock, and the assassinations of prominent leaders.

Yeah, my blood’s so mad, feels like coagulatin’
I’m sittin’ here, just contemplatin’
I can’t twist the truth, it knows no regulation
Handful of Senators don’t pass legislation,
And marches alone can’t bring integration
When human respect is disintegratin’
This whole crazy world is just too frustratin’
And you tell me over and over and over again my friend
Ah, you don’t believe we’re on the eve of destruction — Eve of Destruction, P.F. Sloan, 1965 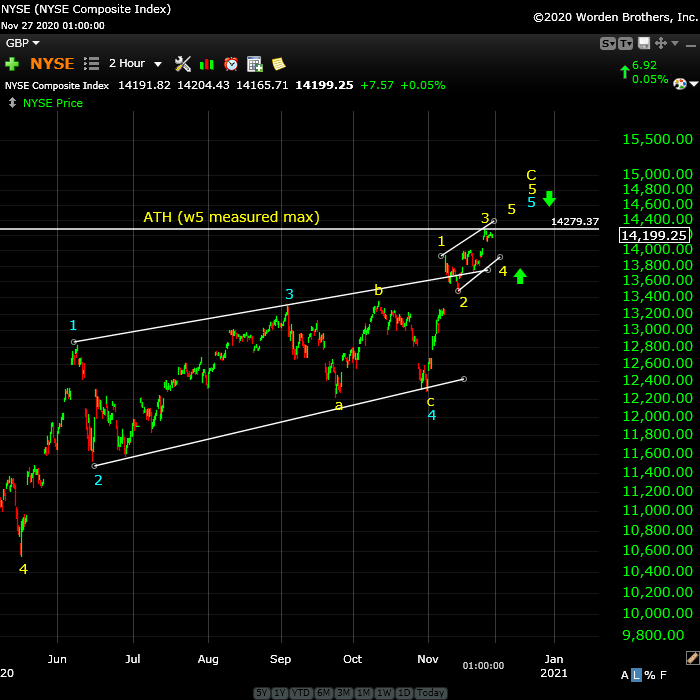 Above is 2 hour chart of NYSE showing us a very large ending diagonal. In fact, there are two of them!

In the above chart, you’re seeing the top of the wave up from March which has traded out an ending pattern, a large ending diagonal (signified by the blue numerical labels). When the entire pattern is complete, the trend will change to the downside.

It appears we’re also tracing out a smaller ending diagonal right at the top (yellow 1,2,3,4,5). If so, I now put us at the top of the third wave of that ending diagonal, with a wave expected imminently to the downside targeting the lower trendline at yellow 4.

There are no real rules within ending diagonals, other than the subwaves are zigzags, which are corrective three-wave patterns. Fibonacci measurements don’t necessarily work, so it’s impossible to know how long the waves will be. However, with the fifth wave, you know (in this case) that it needs to at least reach the upper trendline and may do what we call a “throw-over” (reaching even higher). There’s a “cap” on the throw-over since the fifth wave cannot be longer than the third wave.

We’re currently near the top of the third wave, which has to be in three waves (it’s always the longest wave of the sequence). We’re expecting a fourth wave down to the lower trendline and then a fifth wave up to a final high.

The time factor is the questionable element. Elliott wave does not have a timing component to it. I’m expecting an all time new high which could go as high as the 14,185 level. That final wave will end the rally up from March.

ES, the SP500, and the DOW are all tracing out ending expanding diagonals. You can see regular ending diagonal patterns in NYSE, and the Russell 2000. NQ is in a final contracting triangle.

This weekend, we're still moving sideways (it's been 14 days of sideways) in a B wave  which is heading for a double top at the previous high, waiting for the start of a large B wave to the downside, which will leave one more wave to a final high and finally change the trend to the downside. That will end the eight month corrective rally from the low at around 2200.

I expect to see a turn down in the B wave this week.

Without question, it's the most difficult market I've ever seen because all the waves inside these patterns are corrective — both up and down. It's a quagmire. To top things off, virtually every index and exchange is in a similar type of ending pattern. You have to be extra careful both analyzing and trading it, but we've followed the ups and downs very well.

While the indices are difficult to decipher, DXY (the US Dollar Index, which everything is moving in alignment with, has been going sideways for over five months.

While events don't change patterns, they can dictate turns and it seems that we're at the mercy of the ups and downs of the US election to determine the timing of the next turn.

Summary: It's an incredibly difficult, exhausted market getting close to a top, which I now think will happen sometime within the next month (or two). The market may top with the announcement of the winner of the US election but it's difficult to say when that will be.