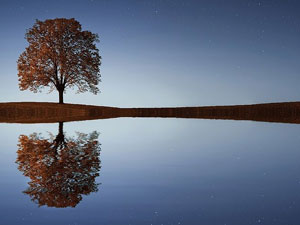 The Calm Before a Storm

While the market was frustrating last week, it seems to have become even more so this week.

ES has now gone sideways for 8 full days in a  set of waves that is very difficult to decipher.

Friday was somewhat of a “fake-out” and while we did get a wave down (I had called for weakness), the wave down did not break to a new low at the end of the day. It stopped and appeared to reverse as soon as it hit the previous low.

While we saw this weakness in ES and NQ, it wasn’t necessarily the case in other indices. As a result, my review this weekend suggests that we have not seen the top of the scrawling, sideways B wave. I’ve never seen a market like this before, but it’s obvious it requires an extreme level of caution and a whole lot of patience.

What I’m looking for now is a test of the B wave high in ES and NQ before we get the long-awaited C wave down. However, if I’m wrong and ES breaks below the triple bottom we have now at 3542, then I’d expect to keep on heading down.

Here’s another exposé video (this is the short promo) which tells the whole story of the supposed pandemic that I flagged as questionable way back in April of this year, because of my work in cycles. It made no sense based on when it happened within the current cycle. It appeared at a cycle high, which no other natural SARS (or other virus has appeared at).

The above 7 minute video is a promo to a one and a half hour video that gives you the background to the “Plandemic,” which was originally “outed” by Judy Mikovits and Robert Kennedy Jr. It’s an eye-opener, if you’re unaware of the background story. The link to the longer-length video is within the promo. It’s free; all you have to do is input your email address to register.

There’s much more to this and it centers around the 2018 executive order by Donald Trump that has, in effect, trapped all these evil-doers. I’ll be covering off more of the background on thetruthsage.com. The next month is going to be dramatic in terms of the developments you’re going to see. I’ll leave it at that, for now. 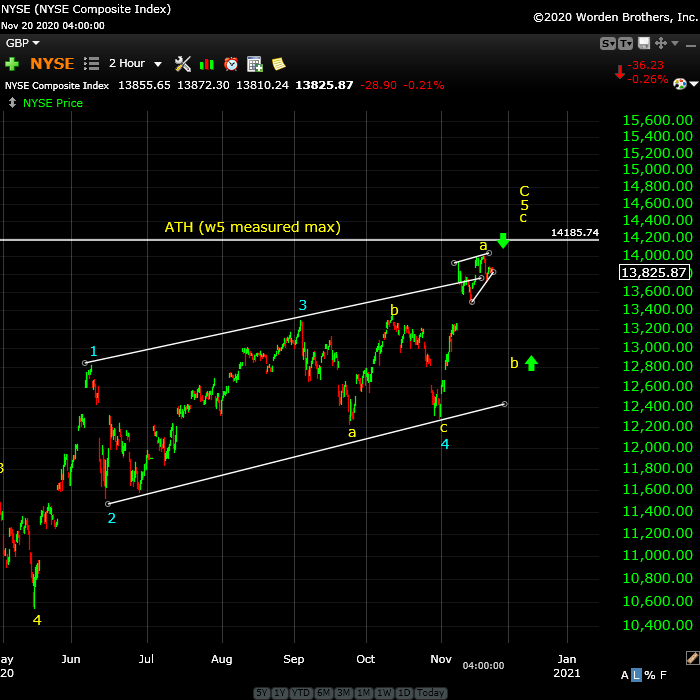 Above is 2 hour chart of NYSE showing us a very large ending diagonal.

In the above chart, you’re seeing the top of the wave up from March which has traded out an ending pattern, an ending diagonal. When this pattern in complete, the trend will change to the downside.

As of this weekend, it looks like we might be tracing out a smaller ending diagonal right at the top of the labelled “a” wave, but it’s a little early to be absolutely certain. If so, we have another small wave up to the 14,000 level before a large wave down, a “b” wave.

There are no real rules within ending diagonals, other than the subwaves are zigzags, which are corrective three-wave patterns. Fibonacci measurements don’t necessarily work, so it’s impossible to know how long the waves will be. However, with the fifth wave, you know (in this case) that it needs to at least reach the upper trendline and may do what we call a “throw-over” (reaching even higher). There’s a “cap” on the throw-over since the fifth wave cannot be longer than the third wave.

We’re currently near the top of the “a” wave of the final fifth wave, which has to be in three waves. We’re expecting a “b” wave down (a partial retrace of the wave up) and then a final “c” wave to the final high.

The time factor is the questionable element. Elliott wave does not have a timing component to it. I’m expecting an all time new high which could go as high as the 14,185 level. That final wave will end the rally up from March.

ES, the SP500, and the DOW are all tracing out ending expanding diagonals. You can see regular ending diagonal patterns in NYSE, and the Russell 2000. NQ is in a final contracting triangle.

This weekend, we appear to be moving sideways (it's been 8 days of sideways) in a B wave, waiting for the start of a large C wave to the downside, which will complete what would become a larger B wave of an ABC wave to a final high.

Without question, it's the most difficult market I've ever seen because all the waves inside these patterns are corrective — in other words, corrective waves, both up and down. It's a quagmire. To top things off, virtually every index and exchange is in a similar type of ending pattern.

While the indices are difficult to decipher, DXY (the US Dollar Index, which everything is moving in alignment with, has been going sideways for five months.

While events don't change patterns, they can dictate turns and it seems that we're at the mercy of the ups and downs of the US election to determine the timing of the next turn.

Summary: It's an incredibly difficult, exhausted market getting close to a top, which I now think will happen sometime within the next month (or two). The market may top with the announcement of the winner of the US election but it's difficult to say when that will be.

Previous Post: A Message from the Market Next Post:Calm on the Surface
[Content protected for Traders Gold6, Traders Gold3, Traders Gold, Traders Trial members only]