How Weak a Week Will it Be?

Update Wednesday, Jan 27 After the Bell: 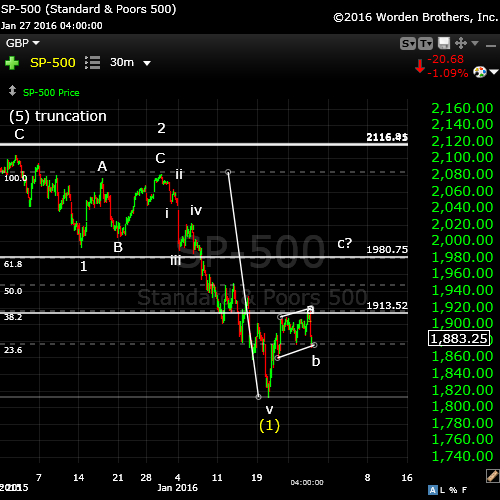 Here’s a 30 minute chart of the SP500 so we can look at what happened today after the FED announcement.

The short story is that we have wave 1 of the third wave down in place. We have a corrective wave continuing to take shape. We’ve completed the a wave (after a lot of up and down action) and today, after the announcement, we completed a more pronounced b wave down and now appear to be reversing up.

If we measure all of wave ‘a’ up and then extrapolate from the bottom of wave ‘b,’ that length again will take us to 1980 in the SP500. That’s an extremely common wave ratio for a corrective second wave. It also happens to be the 62% retracement level from the bottom of wave 1 to the wave top (you’ll see the fib tool on the chart and the horizontal line at the 62% retracement level).

This would be the expected full second wave and lead to the third wave down. 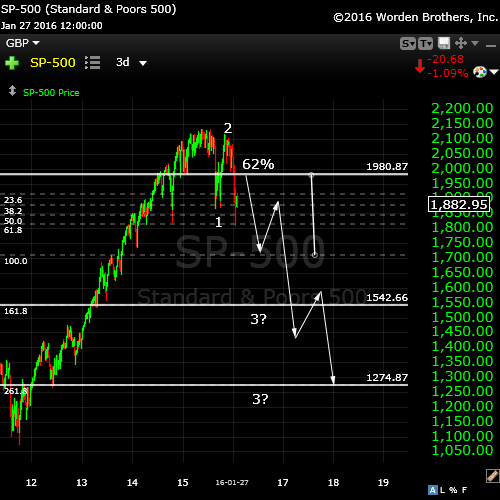 Here’s a 3 day chart of the SP500 so we can look at the expected projection down. I’m feeling comfortable enough now with the unfolding wave count to make this projection of the next wave down. Wave three is typically at least 1.618 X the length wave 1 down and in a bear market of this nature, often extends to 2.618 times the length of wave 1. We’re also looking for a resistance level for it to stop at, as this is usually a requirement to catch a falling knife like this. There is no strong resistance level at the 1.618 ratio point, so my preference is for the lower projection, which could stop at the wave 2 level of the last higher degree wave up.

Wave 3 of three will come down in 5 motive waves and these waves will be in fibonacci ratios, so with some work, we should have a play-by-play assessment of where we are. Wave 2 of three will be a sharp 62% retrace (an abc wave) and we don’t want to get stuck short in that wave.

We wait to see what happens as the current wave 2 up unfolds.

Above is the entire wave down (1 hour chart) from Dec 31 in ES (emini SPX). We’ve now complete the A and B waves of the corrective move up. I’m starting to target upside turnover points more specifically. It’s difficult, as we don’t have a normal wave here (it’s truncated, which is very rare, and so there aren’t any rules for where to measure from).

However the ES gives more clues than the cash indices because of the “full” set of corrective waves up (ES runs around the clock so the waves reflect worldwide sentiment).

In ES, the previous 4th wave (the primary target) is the retrace target at 1947. If wave C traces out to exactly the same length as wave A, it comes to 1950. This area is the most likely target area to me. If we go beyond that level, we are most likely tracing out a full second wave.

My projection is for a fourth wave retrace here and a fifth wave down. My target for a 5th wave down would be about 1626 in ES. 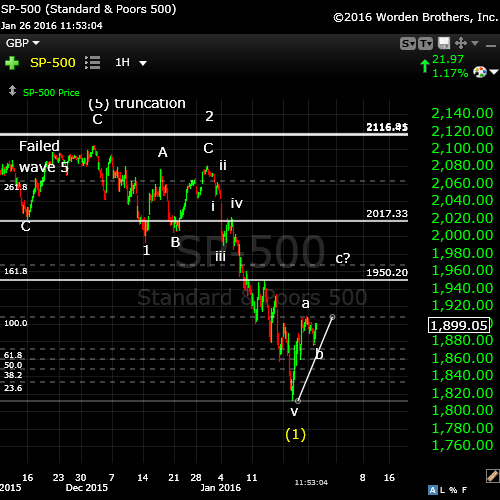 Here’s the 1 hour chart of the SP500. I’ve moved my wave 1 top to December 2, based on a conversation with Wouter (smart guy!) who pointed out that AEX topped on November 27. So did the Nasdaq (Dec 2 specifically) and if you’ll remember my original truncation call, it was with December 2 as a top.

As a result, we have three waves down and require a fifth wave to complete the first motive wave down. This fifth wave, in this instance, will likely be the same length as the first three waves combined. This would give us a downside target of 1620, similar to ES.

The first horizontal line up from the bottom of this chart is at 1950. This is the previous 4th wave and this is my preferred stopping point for this corrective wave. If we exceed that level, we’re likely going to the 62% retrace level. The 38% retrace level (this is a minimum is 1930, or so). That leaves us with a 4th wave retrace range in the SPX of 1930-50.

I will be live on Wednesday/Thursday as I expect this topping process to play out shortly after the Yellen announcement, certainly within the next 48 hours. I will be aggressively short for the fifth wave down. Stick around, it should be fun.

The B wave in the US indices may or may not be complete (if not complete, it doesn’t have very much lower to go until we see a turn back up). The next major move is up in a C wave. I suspect that we will turn lower at the 38% retracement level, due to the market’s apparent weakness. If that’s the case, we’ll see the fifth wave unfold of this first wave down. The Fed announcement of Wednesday coming is likely to be an upward magnet for the market. Shortly after the announcement, I’d expect a turn down.

All the currencies are doing more or less what was expected. SUD/CAD is in a fourth wave and looks like it will complete the larger 5th wave (2.618 X the first wave) that I mentioned in the video. The eurodollar is completing the E wave of the triangle.

This is perhaps the most important week of the year (2016). What happens this week will define the path for equities for the next few years. I’ve created a little longer video (15 mins or so) to take you through the SP500, currencies and their relationship to equities, as well as gold and oil. You’ll find some charts below the video. 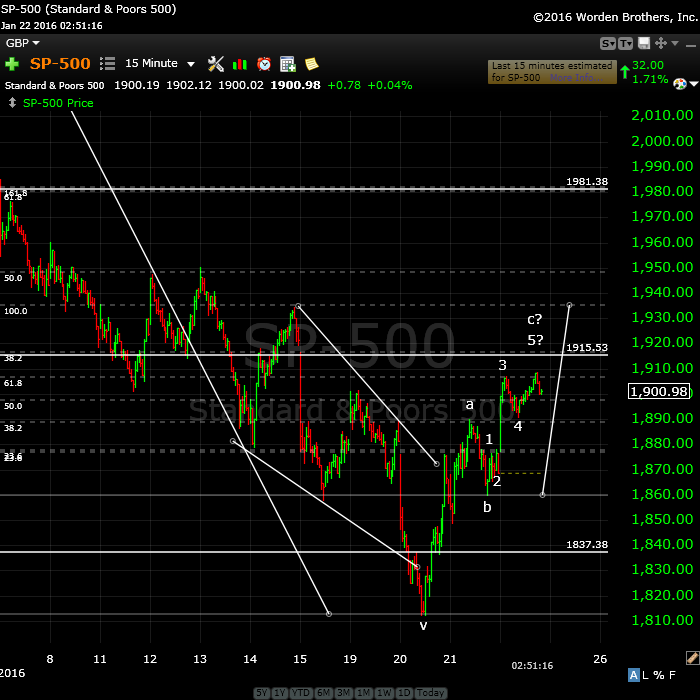 Above is the 15 minute chart of the SP500 as at about 3pm EST, Friday, January 22. You can see the abc corrective wave at an end. We’ve completed the C wave as it’s now in 5 waves. The ES chart is similar and the next move should be down, but not to a new low. We haven’t quite reached the 38% retrace level and this tells me there’s more up in store–how much is the question.

As I mention in the video, we could either do a larger B wave down perhaps 62% of the rise from 1810 or so, and then rise back to either the 1915 level (62%) or shoot up even further to about 1891. The level we rise to will determine the length of the next wave down and even what happens beyond. 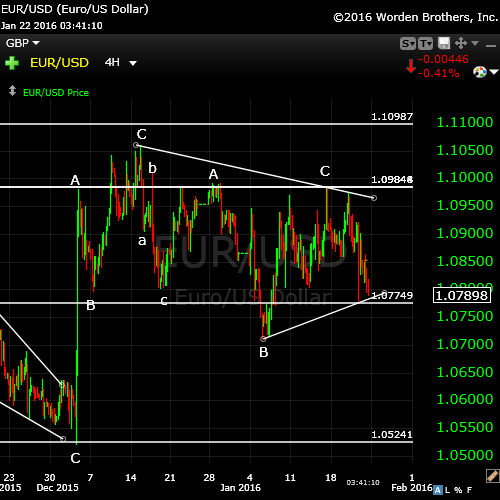 Here’s a chart of the euro/dollar (4 hour) showing the triangle. The euro has been running counter to equities in lock-step pretty much. When it heads down, equities head up. It’s also at an inflection point. I think we’ll head back up starting Sunday (we already did a double bottom and turned at the end of the day Friday.

Longer term, I’ve been expecting it to head down to tag the previous low before heading up in tandem with the rest of the us pair  currencies, which have now bottomed (except for the euro).

My operating scenario: that (since this is not a complete triangle–it would need one more leg up) that maybe equities will do a larger B wave down (starting in futures on Sunday) and then will do a larger C wave up (perhaps even to the 62% level) while the euro reverses down to tag the previous low. Remember, they’re close to mirror images of each other.

Speculation, to a point, but based on what I’ve been seeing for a few months now, it seems likely.

Here’s ES at the end of the day (one hour chart). You can see that we’ve completed the a wave (it was in 5 waves up) and then the b wave, along with 5 move waves up of the C wave. After 5 waves, we need a retrace, so we might see another wave down (could go as low as 62% of the distance to the bottom of the b wave) and then the balance of C up. In other words, a double zig zag). 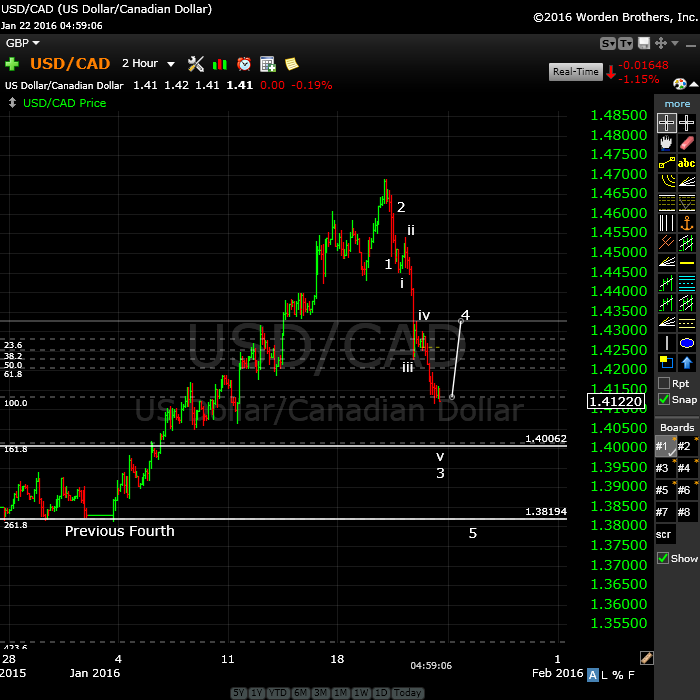 Above is the 2 hour chart of USD/CAD. A lovely motive wave structure, with more still to go. This is how a set of motive waves should look!

Either wave 3 will get us to the previous fourth or wave 5 will–could be either, but you can always tell by the sub-wave structure. Then we’ll have a large retrace 62% (a higher degree wave 2). It’s much more likely wave 5 will get us there.