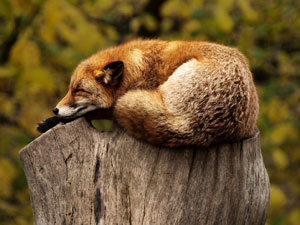 Asleep Before the Storm

It continues to amaze me that the herd is still fast asleep. Most of them likely get their information from the mainstream media, or heaven help me, Facebook.

Where I live, people are wandering around with masks and doing “social distancing,” both having no scientific support ,whatsoever. In fact, masks can be more detrimental to your health, as they restrict oxygen-flow. We’ve apparently had one of two more deaths here in Alberta, Canada in the last few weeks to make it a total of 155 in a population of five million (.00003 or three thousands of one percent). You should be more fearful of lightening striking.

Yet, the irrational fear continues, which is indeed backed up scientifically, as per an article I wrote a couple of weeks ago. 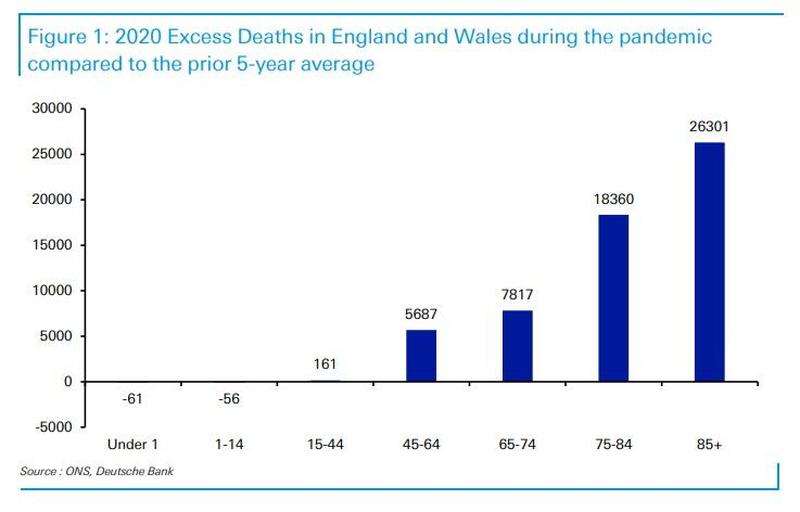 The above chart shows that there are very few deaths under the age of 45, and in fact, the chart below shows that the “pandemic” has all but burned itself out. There will be no second wave, which I stated a couple of weeks ago. Five waves forms a full trend, and once they’re complete, the trend is over (trend numbers added by me) and it reverses. 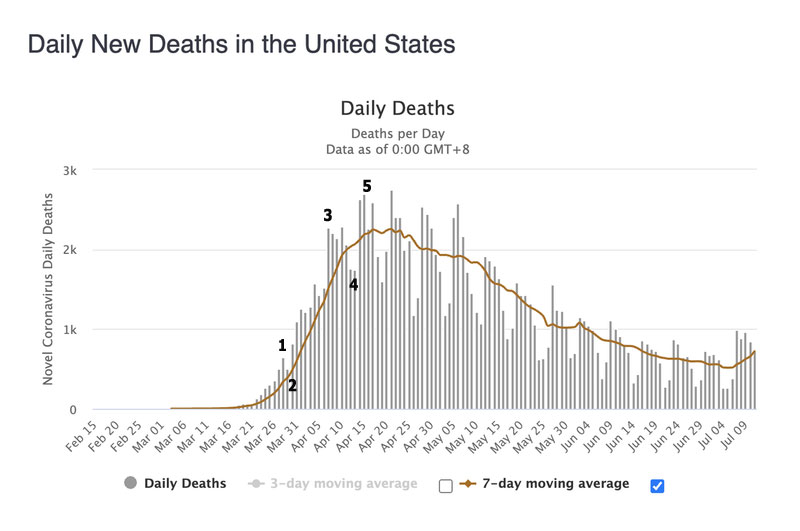 Now, you have to remember that the data is most likely at least two weeks old (it’s not “live” data).

Here’s a good summary article on the experience in Sweden that provides a lot of statistics as the what’s actually happening. You certainly can’t rely on the data from the US, as doctors have been instructed to attribute the cause of death to COVID-19, no matter what actually caused it (there’s an unprecedented attempt to spike to death toll).

So, no second wave and now all the fear-mongering is about the increase in cases. This is supposed to be a good thing, because it leads to herd immunity, which, if you remember, was the objective some time ago (before the deaths didn’t meet expectations, that is).

It’s all propaganda, rigged to make the current US President looks bad, ruin the US economy, and sway the fall election. The Anitfa and BLM “destructive” demonstrations have the same purpose: They’re obviously very well funded.

On top of all this, George Soros has been funding left wing politicians for the past five years. This raises the prospect that the ongoing coup is on an international level, something I provided the support for (and background related to) in my first Thrive Academy newsletter. One thousand year cycle tops are rife with corruption that eventually takes down the empire of the day. You’re seeing this process underway.

The mood of “the herd” has turned decidedly negative and remains so, even though the stock market has rallied. It’s rallied in a corrective wave, so the trend is still down. We’re about to drop another one thousand points in the SP500 and ten times that amount in the DOW. If you think attitudes are negative now, just wait! The rest of the summer promises to be even wilder than the first part. More nonsense to come.

In terms of climate, where I live, we’re struggling mid-summer to get above 20° C, a level that is 8 – 10 degrees below normal. It’s turning colder, as predicted, and that spells trouble for the stock market.

And speaking of corruption, it should be no surprise that “big pharma” is behind the attempt to discredit the effectiveness of HCQ (hydroxychloroquine) in the preventing and fighting this virus.

It’s time for everyone to wake up to what’s really going on here. It doesn’t take a very high IQ to figure it all out. We took a big hit to our freedom after 9/11, based on fears of continuing terrorist attacks on planes. How has that worked out?

Then there was Climategate, then Russiagate, Ukrainegate, the Mueller probe, Flynn, Stone — only a partial list — and now Coronagate, which has people cowering behind masks and governors and mayors in the US locking people up in their basements. When has there NOT been government propaganda?

Eventually, the lights will come on, but it may not be until the market really starts coming down in force … and I peg that event as being less than a year away. Then we’re going to see a major revolution; it’s only a matter of time.

In the meantime, look for the balance of the fourth wave to play out, and the fear level to ramp up a notch.

This week, the rally in ES continued, as expected. However, as mentioned in last week's post the fibonacci measurements did not support a new high. They still don't.

The count on this most recent rally is not quite full, but it  was close, as we left the Friday session. I would expect to see a turn within the next few days. That would make this corrective set of waves up from June 15 a B wave to the potential "simple" 5 waves down from the top, which may, in fact, be the first half of an unfolding zigzag.

Adding some additional strength to the call for an early turn before a new high is the fact that the NYSE, DOW, and Russell 2000 are nowhere near highs. That's a problem in that indices can't start down "out-of-sync" if we're going to see zigzags down), so either they all make a new high, or they all fail before a new high. The first option at this point is low probabiity; it's more likely we're going to see a turn across the board before new highs.

DXY (the US Dollar Index) this weekend also looks like it may not reach a new low. Some currency pairs may have turned into a new trend, but that remains to be confirmed.

The market is somewhat 'broken' at the moment, with questionable wave structures across several asset classes. RSI divergence is also quite high on hourly through daily charts. Volume on the above daily chart really took a dive to the downside this week.

We have divergence in the waves up across the US indices, and it appears now that we're not going to reach new highs. We should see a sudden turn in the next couple of days, I would think.