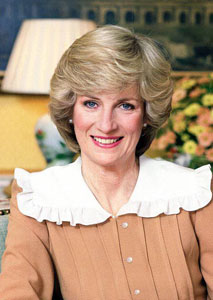 The Queen is dead! Long live the Queen!

Diana is now on her way back to the UK, eventually to take Elizabeth’s place as the head of the commonwealth. How ironic.

Elizabeth is gone, the Pope is gone. Mr. Gates is gone (it’s up to you who you call Mr. Gates, as “he” was a woman, and “she” was a male, but I’ll leave that up to you), Tom Hanks is gone, and so are Harry and Magic Markle … and the list goes on. But, a whole bunch of people are coming back. So, we’re more than even.

To me, this is the start of a new era. It signifies that the Illuminati have been vanquished! Two thousand years of rule over the world is over. 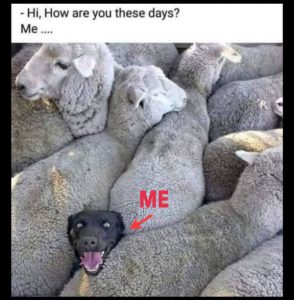 This week, we learned that the Federal Reserve has been rolled into the US Treasury. The US CORPORATION is in bankruptcy court, so the contract with the Rothschild central banking cartel is over.

I’m expecting to see signs of the Emergency Broadcast System start up this week (very likely Sunday). If that’s the case, it’s a new era for me — the end of everyone thinking I’m completely bat-shit crazy …. PERHAPS.

It’s going to take some time for people to wake up … and then a lot more time for them to come to grips with everything that’s been going on. It takes time to grieve and this is the end of a dying world … as I’ve been predicting for several years now. It’s the top of a one thousand year cycle, and it’s playing out as Dr. Raymond Wheeler projected it would even though the Illuminati has tried to do everything in their power to keep the market up and thereby avert what was inevitable. As we’re going to see, “it’s not nice to fool Mother Nature!” 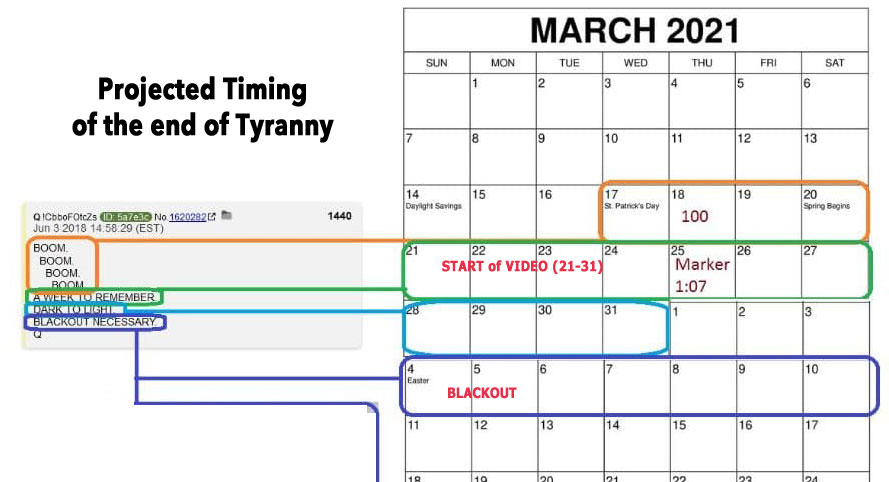 I can’t say without any doubt that this is the schedule going forward, because dates have been broken before (after all, we’re in a war for continuation of humanity. That said, this schedule calls for the firing up of the Emergency Broadcast System on Sunday for ten days (green lines). That promises three waves of wall-to-wall video a day (hours each wave) across the entire world for the next ten days. 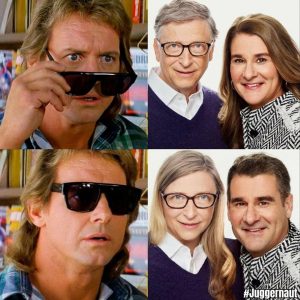 After that, there’s a break of about three days at the beginning of April (1-3). I expect, among other extraordinary events, that all the people who’ve been in the witness protection program (to avoid execution by the Illuminati) will walk free. It will certainly be a celebration! And it’s going to surprise the heck out of everyone (although I’ve given you a head’s up over the past few weeks).

Then, we’re going to have a period of darkness (purple lines (April 4-10). That’s a period when trains and planes will stop, the internet will go out, power will be switched over to the new Telsa free electrical system, promised free power from now on, the NESARA program will be triggered, and we’ll revert back to common law (all judiciary will be forced to stand down). There’s a lot more to come during this period, and here’s a list of what to expect (I have no more information than this and I don’t think the list is in any kind of order):

WORLDWIDE over the coming days to Easter. Ending of Biblical Period. (LENT)

And with that, I remain bat-shit crazy for just a little longer ….

As I wrote last weekend: The twists and turns in this market recently have created patterns that definitely are for the record book! Well, we're not done yet.

We're waiting for the market gods to give us a fourth and fifth wave up for this never ending (in time) market. It's moving extremely slowly. But tops are always a process; this one has been a process and a half.

This coming week should show weakness in the start of a fourth wave for ES and continuing weakness and a new low for NQ ... I hope. It's timing that's the issue. In the other direction (and somewhat under the radar) is the US Dollar Index, which has been in a corrective B wave for several weeks, and it still not done.

As I've been saying for some time, the market is moving to the tune of DXY. DXY is in  a B wave, which is still not complete. This B wave has gone on for almost three months! This direction short-term is up. Once we finish the B wave, we'll enter the final wave to the downside, a fifth wave. This will send futures up to a final high.

The turn will be across the board — currency pairs, oil, gold, and silver. You can throw in DAX with that group (it's in a larger ending diagonal of its own).

Summary: We're getting close to a final high from this rally from March, 2020. The wave structure appears to be a corrective pattern in five waves.

At the current time, ES and NQ are out-of-sync, but I expect weakness this week, which should get them aligned again at the bottom of a fourth wave.

This will put us in the final stages of this rally up from March of last year,  with one more high left to play out before a major trend change.

Once we've completed the larger fourth wave down (to start in a month, or so), we'll have a long climb to a final slight new high in a fifth wave of this 500 year cycle top.