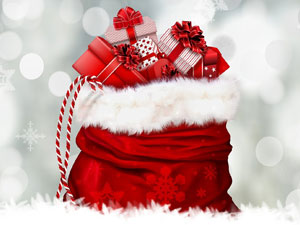 I’m referring to the normal Santa rally, which happens over the Christmas holidays and into early January. I think it’s going to be a no-show. Nothing would make me happier to see a top on Monday. And then there’s the 26th, which is a solar eclipse. We’re that close.

This is the craziest top I’ve ever seen! It’s not a normal top by any stretch of the imagination and that’s why it’s so difficult to call it. It’s a “rogue” pattern, but fits well into the larger pattern, which has to be an expanded flat.

In any case, we’re either at a top this weekend, or only a few days away.

Sentiment mid-day on Friday actually hit 92, which is the highest level I’ve ever seen on this index. That signifies that everyone’s pretty much “in” the market and feeling very good about they money they’ve made — an excellent foreshadowing of a top.

This weekend, I spent a lot of time measuring and attempting to determine if the turn is on Monday or not. This is such a strange top that I found it impossible to be sure. But we’re days away, at the most.

NYSE – At a Measured Top

The count is still up until we get a turn and five waves down at small degree (eg - a 5 min. chart). A trend change is imminent, but we have to wait for the market to give the turn signal.

The subwaves up on a daily chart are not a recognizable Elliott Wave pattern; however, expanding the chart to show the top in January, 2018, strongly suggests we're at the top of the B wave of an expanding diagonal, as I've been saying for months now.

In the case of an expanded flat, I'm expecting 5 waves down in a very large C wave to at least the 2100 area. This would be a fourth wave with one more high to come in a year, or so.

The entire wave up from 2009 is corrective, so it makes determining a top based on measurements quite problematic. Corrective waves always have a number of possible turn points based upon measurements. They also have wave structures that very difficult to decipher (there are very few guidelines for corrective waves and no rules, unless it's a typical corrective pattern (ending diagonal, flat, triangle, or zigzag), and even those can differ wildly from what you might expect.

That said, the final waves up in the major US indices have a full count. The NYSE (in the blog post above) shows where we are now and the multiple measurements that are pointing to a turn nearby.

Sentiment is as high as I've even seen it (bullish) and that also suggests a turn.

In terms of natural "triggers," solstice is this weekend and there's a solar eclipse on January 26. Both are likely triggers. My preference is for a turn this coming Monday, but currency pairs still have work to do, so unless they've decoupled from equities, we may have a little longer wait. That would bring the 26th into focus.

We're at the top this weekend of a final fifth  of fifth subwave. I'm focused on Monday for a possible turn due to solstice, measurements, and wave structure. There's an alternate date of December 26. There are large liquidity issues for the US Dollar which should increase as we move into the New Year.