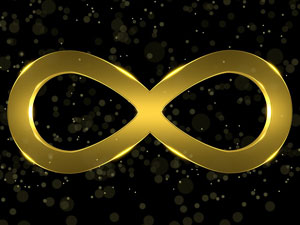 Friday was a Game Changer

The infinity icon on the left gives you a good idea of the frustration I’m feeling about the length of time it’s taking for the US equities market to top.

Friday afternoon late was a game-changer, because what was a potential ending diagonal very definitely broke to the downside, meaning we’re most likely going to get a larger fourth wave.

As a result, the impending top has been postponed for a few weeks, at least.

The wave structure of these waves up from June 3 (in what appears to be the last wave of a broadening top formation — also called a megaphone formation) are not what you’d expect for a final wave of a rally; they’re corrective and missing the usual signposts (a broadening top is not an Elliott Wave pattern and it’s described in Murphy’s well-known and respected book on technical analysis as “an unusually difficult pattern to trade“).

It certainly has been that: a most difficult pattern to trade!

While I was looking for an imminent top, the game has changed. If we get a fourth wave here (my preference), that means we have the fifth subwave up still to go. If the fifth wave turns into a triangle or diagonal, we could see a pattern that takes a good month to unfold.

At the same time, there are some mixed messages. Gold seems to be tracing out an ending diagonal (unconfirmed at the moment) and oil looks like it’s going to start a rally that may take a month or a little longer to reach its target.

The early part of this week should give us more of a clue at to what the timeframe will be. We were so close, but since all the asset classes I cover (WTI oil, USD currency pairs, the US Dollar Index, gold and silver, US indices), are moving in tandem and have to reach their respective tops, this drop into a fourth wave definitely prolongs the dramatic drop I’ve been projecting.

There are some very good opportunities shaping up in the meantime, but the “big drop” has quite suddenly moved itself later by a couple of weeks at the very least. When you put all the analysis together, it looks like we’ll be wandering around here beyond just a couple of weeks.

So, we have to wait for the setup.

In the meantime, we may see a volatile week, as we head into the middle earnings season. For the next two weeks, we have some heavy hitters reporting.

Italy is in trouble (Spain not far behind), Britain is in turmoil with an election next month and a Halloween deadline for Brexit. Ebola is raising its ugly head and the addition of a measles outbreak is killing thousands in the Congo faster than ever before. I’ve warned for years about a coming pandemic. 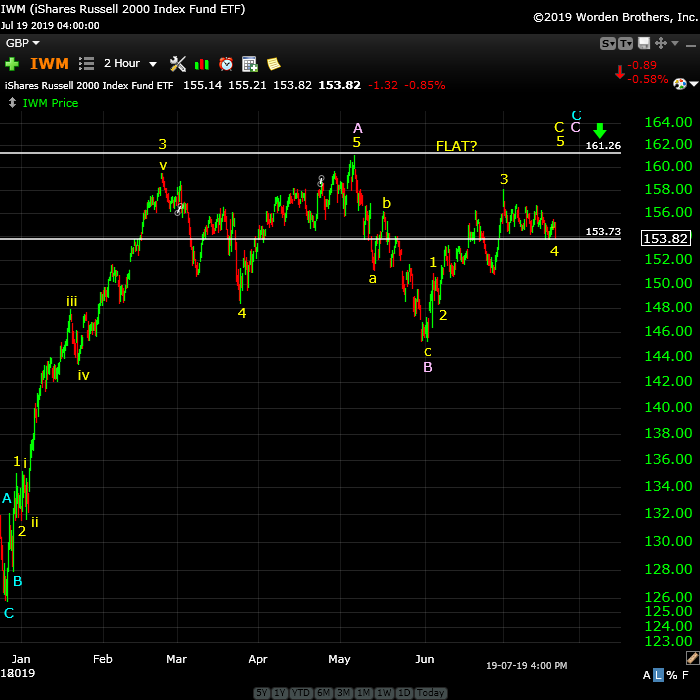 Above is the 2 hour chart of IWM, the ETF for the Russel 2000. It’s in the final fourth wave after several attempts to start the fifth wave. It needs a new high in the 161 area, due to the fact that the previous wave down is in three waves and must be fully retraced. This index may be the straggler of the US equities indices, as the rest are very much closer to targets. This weekend, we appear to be a the bottom of the fourth wave.

This week will be an important week that may give us a good indication of timing for a top. This week, we were set up in a questionable ending diagonal (which ended up with trendline which were slightly diverging (which is not a particularly good sign for a top in progress).

On Friday late in the day, the potential ending diagonal broke and now we have a potentially deeper fourth wave to contend with, which will likely add much more time to the topping process — how much time, depends upon how far the fourth wave drops. My preference is for a drop to the 2890 area.

The waves down are corrective, which means we're still looking for a top. The big question in my mind: "Is this drop going to end up postponing a top until early September?" After the fourth wave bottoms, if we end up tracing out a triangle or ending diagonal, that timeframe becomes easily the most likely.

It would still end up producing a flat, as the final wave up is not likely to get much above the current high, perhaps to the 3040 area or a few points higher. It's too early to attempt to select a final target for a top.

Longer term, I'm expecting the C wave of a an expanded flat to the downside. In that case, a first wave should drop to the 2725 area (previous fourth of one lesser degree) and then bounce in a second wave to the 2875 area (62% retrace), before a third wave down to about 2250. After that, a fourth and fifth wave down to under 2100 will round out the drop.

Summary: We have a delay in the expected top, which may add a few more weeks to the process. As the waves down are corrective, we still need to put in a top. This wave down is most likely a fourth wave, with a downside target of around 2890. The larger pattern is a record-breaking broadening top (not an EW pattern).

Once we have a final top in place, I'm looking for a dramatic drop in a 4th wave to a new low. ES will eventually target the previous fourth wave area somewhere under 2100.

Cancelled this week due to technical issues