The All the Same Market Line-up 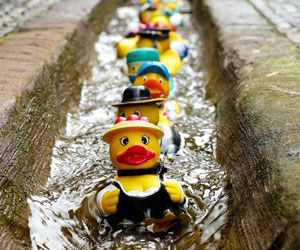 They’re All Lining Up

If you were in the Chart Show this past Wednesday, you caught a really good one! I showed how virtually everything I cover is set up at inflection. There are flats of one type of another all over the place.

Last weekend, I said that I expected the topping process to last into this coming week, and here we are. We have virtually a full count in the US indices (with just a bit more to go in the final subwaves).

My preferred timing for a turn is around the full moon and solar eclipse on July 16. Along with that is the fact that earnings season happens the day after, on July 17, when Alcoa reports (AA). We could certainly hang up here a bit longer, but we’re so close to a top that it could happen anytime after about mid-week, by my estimation.

I expect a lot of red from companies in the next few weeks as they come to terms with Q2 reporting reality. After the share buy-back frenzy in recent months, corporate debt is at an all-time high. At the same time, consumer purchases are way down. You just to take a look at the automotive market to know how dire the economic situation really is.

Italy is in trouble (Spain not far behind), Britain is in turmoil with an election next month and a Halloween deadline for Brexit. Ebola is raising its ugly head and the addition of a measles outbreak is killing thousands in the Congo faster than ever before. I’ve warned for years about a coming pandemic.

So, we’ll keep a weather eye open! (an apt expression, since being a sailor, I’d usually much rather be doing that …. except for the next few weeks!

What’s extraordinary from my perspective is that we have Elliott Wave flats of one type of another setting up across indices, gold, and several stocks. So I think we’re for the most part, locked into a 5 wave pattern on the downside (after the top). I’ve never before seen so many market assets at inflection points (internationally). 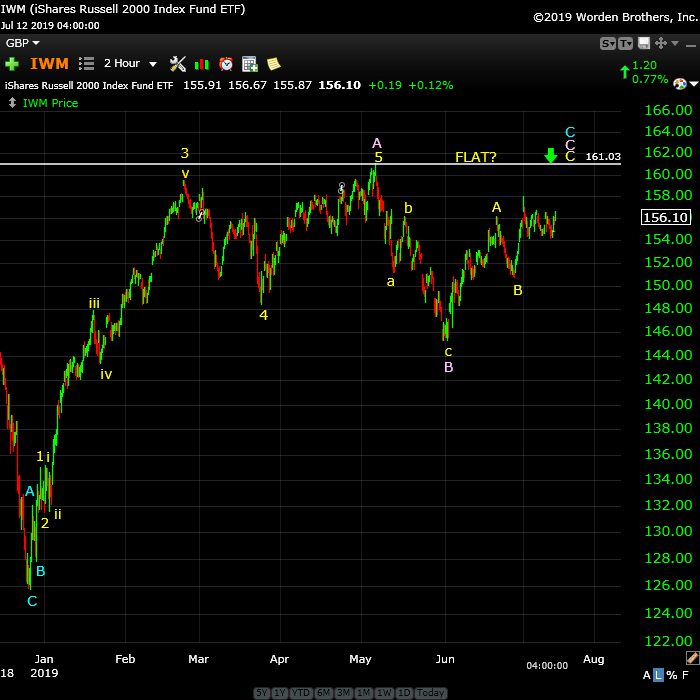 Above is the 2 hour chart of IWM, the EFT for the Russel 2000. It’s in the final fifth wave which needs a new high in the 161 area, due to the fact that the previous wave down is in three waves and must be fully retraced. This index may be the straggler of the US equities indices, as the rest are very much closer to targets. But as of this weekend, there are only 5 points left to go. 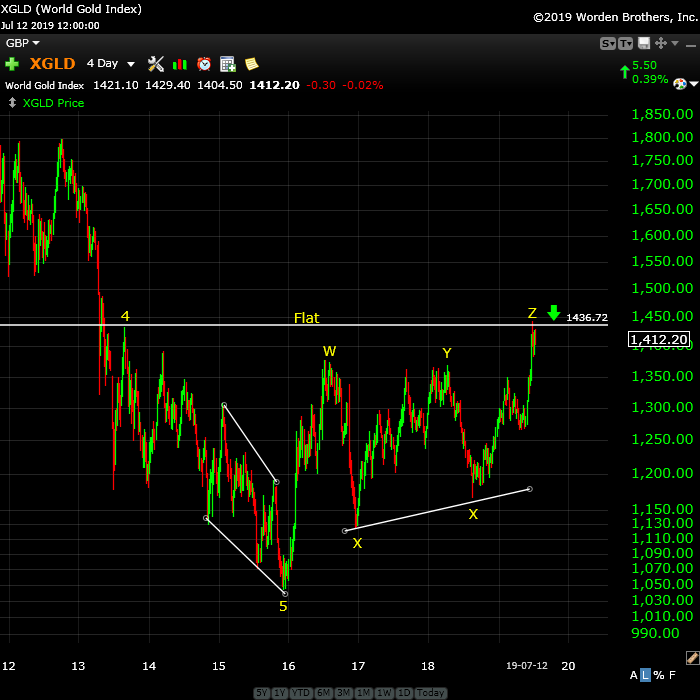 Above is the 4 day chart of XGLD (gold). You can see the same setup exactly in GLD, which offers a more accessible way to trade this setup. The pattern here is yet another flat. It’s a fourth wave flat (very common), with three waves down from the previous 4th wave, then three waves up to the 1436 area. Expect a 5 waver in a C wave down to at least the 1043 area (and it could go much lower).

Adding support to this prognosis is the fact that long exposure is at record highs and it’s hit the main stream media, which is always a sign we’re about to turn in the other direction!

The direction remains up in the US indices, but not for much longer. We're set up in ES, the sp500, and the DOW as an expanded flat. That suggests very strongly (because we seem to have flats all over the place) that we're going to get a devastating drop to below 2100 in ES and the SP500 that will be in five waves. I think the target will be closer to 1900 for ES and the SP500, but that remains to be seen.

The wave structure of these waves up from June 3 (in what appears to be the last wave of a broadening top formation — also called a megaphone formation) are not what you'd expect for a final wave of a rally; they're corrective and missing the usual signposts (a broadening top is not an Elliott Wave pattern and it's described in Murphy's well-known and respected book on technical analysis as "an unusually difficult pattern to trade").

It certainly has been that: a most difficult pattern to trade!

I'm expecting the C wave of a an expanded flat to the downside. In that case, a first wave should drop to the 2725 area (previous fourth of one lesser degree) and then bounce in a second wave to the 2875 area (62% retrace), before a third wave down to about 2250. After that, a fourth and fifth wave down to under 2100 will round out the drop.

Summary: Expect an imminent top (very possibly this week) to complete this large, corrective "B wave" up from the Dec. 26 low. The larger pattern is a record-breaking broadening top (not an EW pattern).