The US Dollar – Bigger Picture

There was an article in Zerohedge at the end of this past week that compelled me to do a long overdue technical analysis of the US Dollar Index. The article is about the work some countries have undertaken to develop and alternative to the SWIFT system, which has been weaponized by the US government against anyone it finds disfavour with.

The Article is “EU Announces Channel To Circumvent SWIFT And Iran Sanctions Is Now Operational.“

At the present time, all major international transactions must be done using the American dollar (oil particularly) and any action that reduces the need to use the dollar is deflationary.

We US Dollar chart warns of deflation in the longer term, so the technicals seem to be consistent with the fundamentals. However, the dollar chart is corrective and doesn’t have a huge upside, so this may mean that something else causes a reversal sometime in the future. However, based up the time the dollar takes to move an appreciable distance, that event is likely several years away.

One of the key indices to watch is IWM (the Russell 2000), which needs a new high. 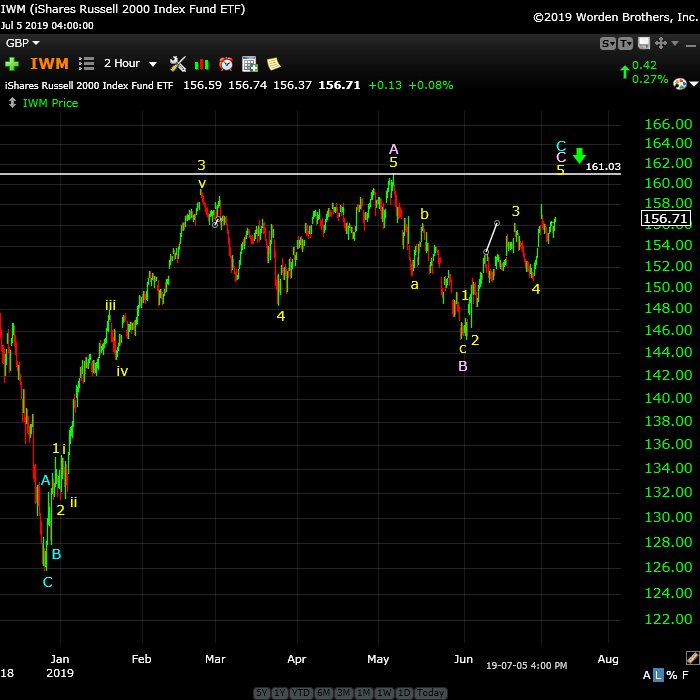 Above is the 2 hour chart of IWM, the EFT for the Russel 2000. It’s in the final fifth wave which needs a new high in the 161 area, due to the fact that the previous wave down is in three waves and must be fully retraced.

The direction remains up in the US indices, but not for much longer. This weekend, I put us in the fourth wave of a larger final fifth wave. The target is above 3000 in ES and could go up to the 3040s.

The wave structure of these waves up from June 3 (in what appears to be the last wave of a broadening top formation — also called a megaphone formation) are not what you'd expect for a final wave of a rally; they're corrective and missing the usual signposts (a broadening top is not an Elliott Wave pattern and it's described in Murphy's well-known and respected book on technical analysis as "an unusually difficult pattern to trade").

This weekend, we may still looking for the bottom of this small fourth wave from Friday.

Once that bottom is in place, we'll be looking for a new high across the SP500, the DOW, the Nasdaq, and all the other NYSE sub-indices. The turn down from that high will lead to what I believe will be five waves down over the balance of the summer to a bottom below 2100 in ES.

There is an option of a set of zigzags down to the same level. If that's the pattern that traces out, the retraces will not be as strong as they would be with the C wave of a flat. We'll get a lot of information about the most probable path from the first wave down.

Finally, something often "breaks" at the tops of major rallies, and a new article out today regarding the current status of Deutsche Bank is signalling that we might have the making of another Lehman on our hands. The article is "The Deutsche Bank As You Know It Is No More." Time to pay attention to what's happening on the international banking front.

Summary: Expect an imminent top (week or so, perhaps) to complete this large, corrective "B wave" up from the Dec. 26 low. The overall pattern is a record-breaking broadening top (not an EW pattern).