Ending Diagonals Point to a Top 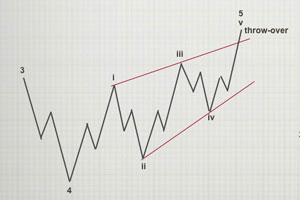 Fake-out at the Top

After the apparent wave failure of last week, the market turned right back up this week. Tops are a process and this one is has been hanging on as the really big ones almost always do.

But, the waves don’t lie. The week began with a rally into what appeared to be the third wave of an ending diagonal. That wave appeared to have topped at the end of the day on Friday.

The US indices are setting up for a turn right across the indices. There are potential flats in place topped with ending diagonals. I don’t know how a market could be more obviously telegraphing a major turn coming very soon.

So what we were seeing last week was the first wave of an ending diagonal, which needs to be in three waves. But ending diagonals are rare and you can’t be certain they’re the pattern of choice until the their fourth waves are in place. However, the pattern this time, is almost textbook.

The larger wave structure up from June 3 (in what appears to be the last wave of a broadening top formation — also called a “megaphone formation”) are not what you’d expect for a final wave of a rally; they’re corrective and missing the usual signposts (a broadening top is not an Elliott Wave pattern and it’s described in Murphy’s well-known and respected book on technical analysis as “an unusually difficult pattern to trade“).

It certainly has been that: a most difficult set of subwaves to predict!

Gold seems to be tracing out an ending diagonal and silver is in a larger one, as has been for some time.

Italy is in trouble (Spain not far behind), Britain is in turmoil (even after the recent election) with a Halloween deadline for Brexit. Ebola is raising its ugly head and the addition of a measles outbreak is killing thousands in the Congo faster than ever before. I’ve warned for years about a coming pandemic. 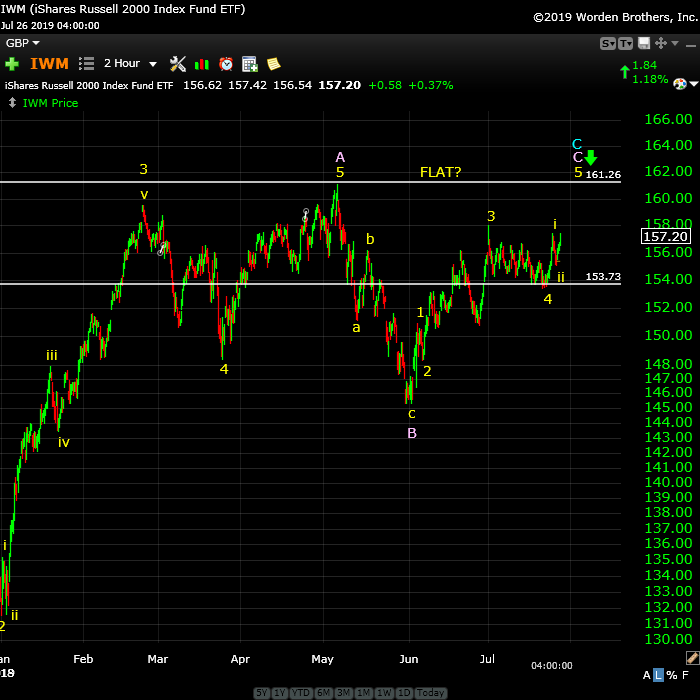 Above is the 2 hour chart of IWM, the ETF for the Russel 2000. It’s now in the final fifth wave after going sideways in a fourth waves for several weeks. As I’ve being saying, it needs a new high in the 161 area, due to the fact that the previous wave down is in three waves and must be fully retraced.

I'm looking at this coming week as providing a good probability we'll see a top in the US indices.

We appear to have ending diagonals playing out in ES/NQ, the NDX, and SP500. The third wave appears to be in place. My preference now for ES is for a drop to in a fourth wave, following by one more wave up to a slight new high.

I'll be looking for a trend change sometime soon after the Fed announcement on July 31.

Ending diagonals are ending patterns. They mark the end of the trend and are known for dramatic turns in the opposite direction.

The larger pattern, as I've been saying for weeks now, appears to be a flat, which is making itself apparent in the DOW, SP500, NYSE, the Russell 3000, and very possibly, the Russell 2000.

Summary: A top in the US equities appears imminent, with ending diagonals appearing across the major indices. These ending diagonals are marking the top of a flat pattern (3-3-5), which predicts a five wave drop to a new low below the A wave bottom at about 2300. The larger pattern in ES is a record-breaking broadening top (not an EW pattern).

Once we have a top in place, I'm looking for a dramatic drop in a 4th wave to a new low. ES will eventually target the previous fourth wave area somewhere under 2100.