An Accident Waiting to Happen

It’s been way too calm in the markets for way too long. It’s summer, after all, so you have to expect that kind of action—flat. Summers are always like that.

However, we’re at an inflection point across currencies and US indices and I expect a turn, likely this coming week.

Since early July, I’ve been talking about this ending diagonal taking shape. It’s the only Elliott wave pattern that makes any sense at this point. We’re definitely in a triangle of some sort. We’ve completed a fourth wave, and are in the fifth and final wave, so by a process of elimination, that leaves an ending diagonal (triangles are fourth waves, but we’ve already completed the fourth wave). Ending diagonals are fifth wave triangle patterns that are rare but mark the final end of a trend.

This week, I put us at the top of the first wave of that pattern, which predicts a large downturn is imminent. I would also expect some sort of financial event to coincide with that turn.

On Friday, August 5, EWI came out with their latest monthly financial report in which they stated,

This information supports a major top not far off.

Events follow the markets, not the other way around. I believe that the markets are a mathematical representation of the “mood of the herd.” At certain points, the herd (the masses) reaches a psychological turning point and create an event to mark a turn in mood. But that event doesn’t turn the market. The market is already at the turning point. The Elliott wave principle tells us that by the culmination of a pattern, or a major wave.

We’re at that top of a major wave. The subwave structure of both the emini futures and the SP500 tell us that a turn is imminent. I expect an event to mark that turn.

The media pundits and financial mavens will point to the event as the cause of the turn, but we’ll be out in front, expecting it either because the waves forecast it, or a particular cycle turn date dictates it.

There are a series of charts below that are pointing to this turn as being imminent.

On another note, looking at the bigger picture (a major top that’s been building for the past 500 years), I’m fascinated by what I see happening throughout society. It takes me back to the work I continue to do relating to Dr. Raymond Wheeler, in his description of the psychological traits of society at the turn from a warm dry climate to a cold climate (the first part of which, will be wet—hence the floods across the world that he predicted starting about the year 2000).

More about this as we move on, but the point is that at the top market, there is a major turn in the way the masses think. It’s the underlying cause of collapse.

Another theme is the conspiracy by the financial elite to control the world through the international banking system, which is underway. Money and finance (the rise of the merchants, going back to the Bible) runs in parallel with the culmination of a warm-dry phase. The good news is that it cannot win out. Society will cleanse itself of all the ills over the coming collapse and eventually, we’ll move to a more democratic society overall. That’s the good news, although it will happen slowly, it’s thrilling for me to see the start of the turn. 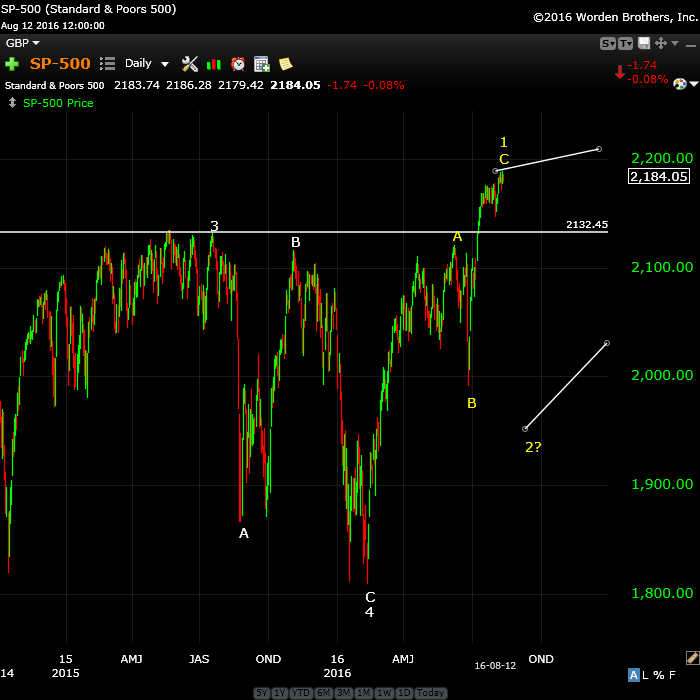 Above is the daily chart of the SP500 showing the bigger picture. The final wave up to our current position is in 3 waves, after completing a fourth wave, so the only Elliott Wave pattern left that fits what description is and ending diagonal. We’re at the top of wave 1, getting ready to turn down. 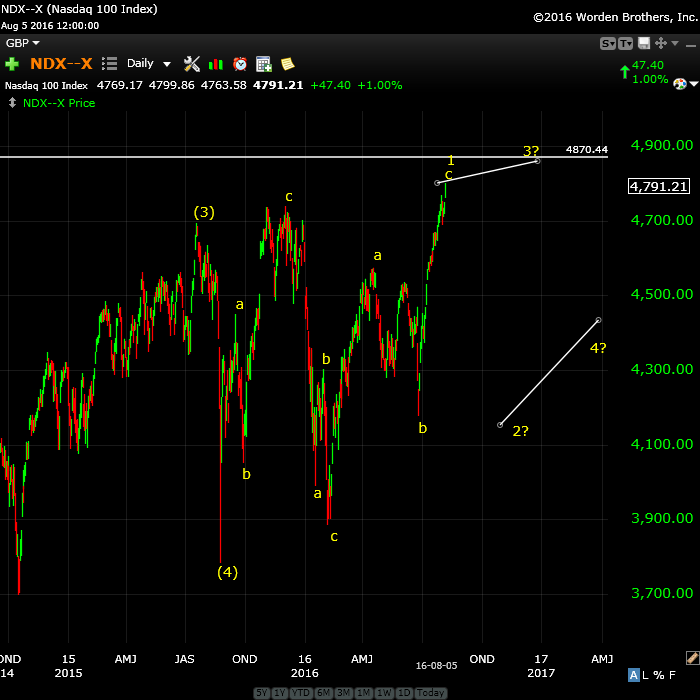 Above is a daily chart of the NDX (Nasdaq). As well as the DOW, this pattern also is looking like a very large ending diagonal. If that’s the case, we may get one very large 2nd wave down and then a final 3rd, 4th, and 5th wave up to a top. Ending diagonal subwaves are all in 3’s. 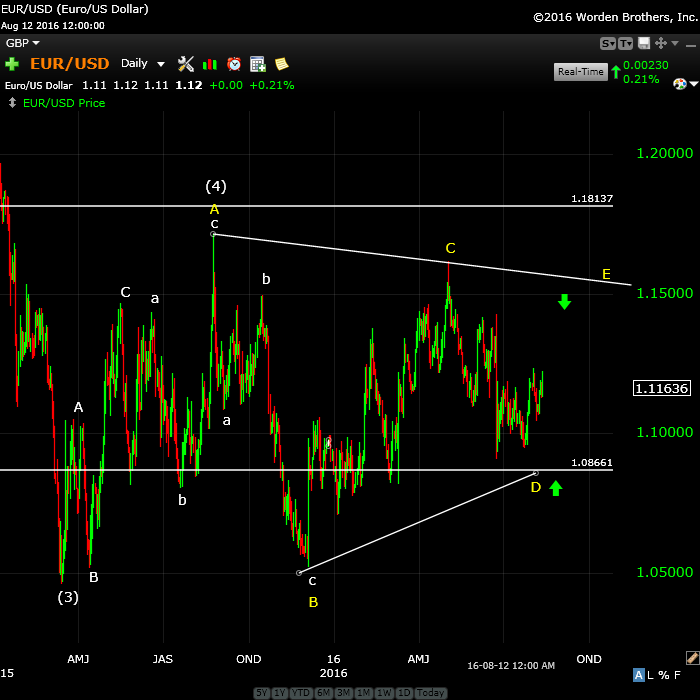 EURUSD should eventually turn down after finishing the E wave in tandem with the US equities. 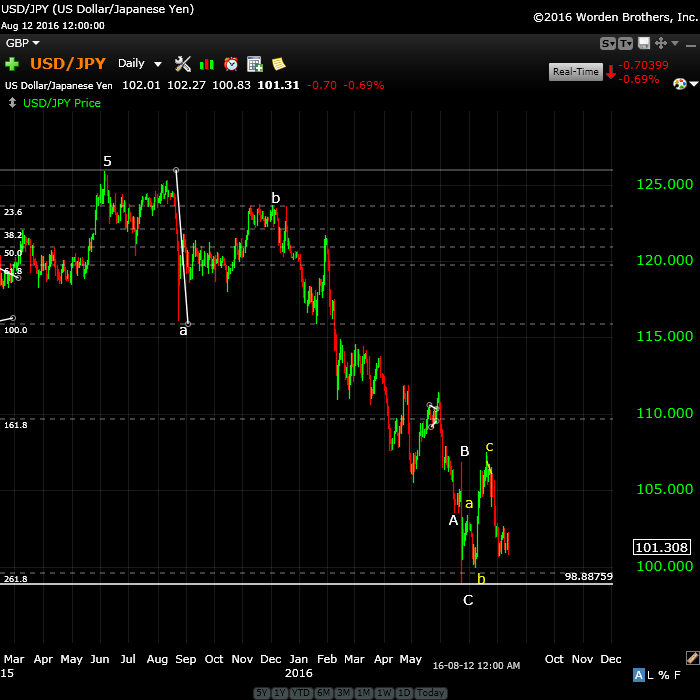 Above is the daily chart of USDJPY showing the imminent double bottom. This forecasts a major inflection point for other major indices, particularly GBPJPY and GBPUSD, which both are almost at fibonacci targets and due for a 62%b retrace. When USDJPY turns, it should result in a major bottom and bring about a five wave climb to a new high above 125.85. 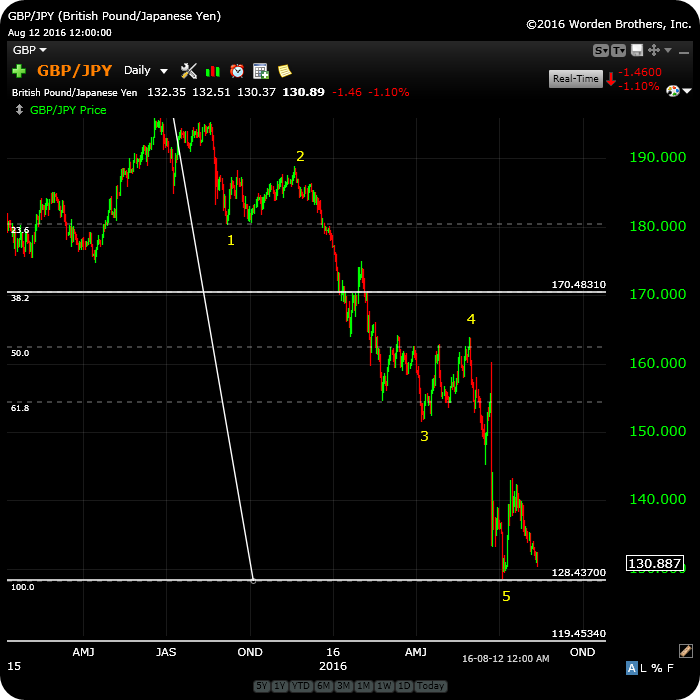 Above if the daily chart of GBPJPY showing a possible bottom of a motive first wave down. GBPUSD is also at a potential bottom, both looking for turn up for a good swing trade to the 62% retrace level. In this case the target would be the horizontal line at ~170.46.