Setting Up for a Lucrative Trade

Last week, I talked about the “right look” of motive waves. These are waves comprised of five subwaves. At the end of five waves, they have to retrace either 62% (corrective second wave) or 38% (corrective fourth wave) and then start another motive wave of 5 in the same direction as the first one. Motive waves have very strict rules about length and structure.

The best way to determine an end point is the extend from the A wave. Usually the C wave will have a fibonacci relationship to the A wave (equal to or 1.618 X the A wave). Corrective waves come in threes and when they retrace, depending upon the situation, they retrace completely. A case in point is gold. 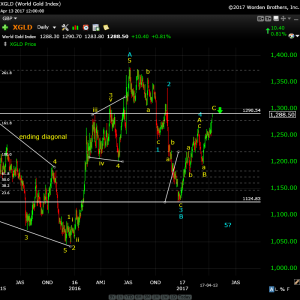 On the left is the daily chart of gold that I displayed on April 16, and noted that a turn was imminent (click to enlarge). The reason for the call was that the waves up from ~1124 were in 3’s. It could not have been more evident to me, although there were many analysts and pundits called for gold to keep on going and going and going.

In fact, there were two sets of three waves. The lower case yellow abc up from 1124 and the uppercase yellow “three.” Measuring the length of the a wave and extending the fibonacci extension to 1.618 foreshadowed a turn in the near future. 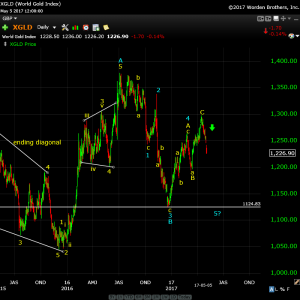 On the left is today’s daily chart (May 7) of gold showing the top of the bullish ABC wave on April 17. Gold turned and then moved down tentatively at first (it displayed what looked like three waves down). So, for the first week or so, it was difficult to tell whether we would retrace to a double top, or continue down. A waves are very difficult to predict the length of until you have enough information. That was the case here.

However, it eventually dropped (silver was a good indicator that it would, since silver has dropped like a stone relative to gold) and the prognosis is for a continued drop, likely to about 1200 before a bounce. Gold should retrace the entire three wave bullish move up from 1124. It will do this in either three waves or five.

Silver is moving parallel to gold, but silver is much weaker and I’m projecting an eventual drop to the 15.60 area.

The real key to Elliott waves is being able to recognize patterns, but more importantly, the ability to decipher a three wave move as opposed to five waves and understanding the rules and guidelines around them. It provides much more confidence in predicting market moves and I have yet to find it break a rule.

A most difficult market to decipher. This is not a normal structure for an ending 5th wave; it's a corrective structure, which we've never seen before in an ending set of waves. There are really no first, second, third, fourth, or fifth waves of this large third wave—they're all zigzags (a lot tougher to decipher), but there can only be three at most.

I've relabelled the charts to show a third zigzag of a combination wave in progress for ES (this meant I had to change the count of the first zigzag to include what I initially thought was the second zigzag—my educated guess). So we have a third wave of three zigzags and I put us in the final one now.

Above is the daily chart of ES (click to enlarge, as with any of my charts). On Friday, ES went to a slight new high. It was not confirmed by the SP500, nor by any of the other USD indices (NYSE, DOW, IWM, IWV, DOW Transports). So cash indices are still in a "fourth wave" (as of Friday). ES, however has gone to a new high in a zigzag and this can only be a continuation of the third wave. I think we still have a little ways to go before a turn down. I'm projecting a probable top of ES at 2410-15.

Since ES went to a new high on Friday at the end of the day, I suspect the cash indices will do the same (not necessarily all of them). However, the bullishness will likely be short-lived. Although I'm projecting a slight rise, overall the market looks extremely bearish.

Now, I could be surprised by an immediate downturn, but that's a lower probability outcome in my opinion, due to the new high by ES. It would be odd to have futures and cash in the same index with different counts. However, other indices sporting non-confirming counts is very bearish and suggests a top is near.

Let's look at why the medium term looks so bearish: