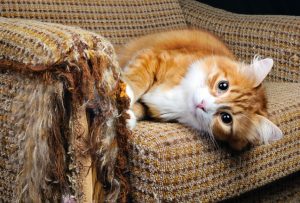 Exactly, kitty! Let’s take a look under to hood … er, sofa in your case.

This weekend, I want to look at the chart of ES (e-mini SP500 futures) and “pull apart” the idea that it’s a motive wave. To do that, we need to look “under the fabric.”

Ralph Elliott cautioned that motive waves must have the “right look.” To a novice, it may take quite some time to be able to discern motive waves from corrective waves , even if I do a really good jog of explaining the difference. It takes time and a familiarity with the concept to be able to immediately see the difference. Motive waves must follow a strict set of rules and any deviation from this pre-designated pattern, makes the wave in question “corrective.”

Not all of us have the inherent ability to recognize patterns. I don’t know how much of this is a learned ability percentage-wise; however, you can certainly enhance your pattern recognition skills, as highlighted in Malcolm Gladwell’s book, Outliers. All it takes is 10,000 hours!

Anders Ericsson, highlighted in that book, studied violinists at the Berlin Academy of Music in the 1990s. He found that experts became experts based on the amount of work they did. “People at the very top of their game don’t just work much harder than everyone else. They work much, much harder.” You can learn to recognize patterns in the market, but it takes time. In other words, “cognitive repetition.” You need to work hard to get really, really good at it.

So think of this as a “starter exercise.” 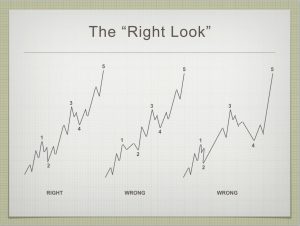 On the left is a series of three drawings (click to expand) of what might be construed as a bullish motive wave. The one of the left is the motive wave; the other two are “pretenders.” Motive (impulsive) waves are waves that are trend waves, defined by the number of waves and their relationship to each other. There are very strict rules that they must adhere to in order to be classified as motive. If they break any of these rules, they are “corrective.”

The most important  motive wave rules (from Prechter’s book, The Elliott Wave Principle):

Motive waves have to follow the above rules, or they are unquestionably corrective.

I find the above set of rules inadequate, in that they don’t address fibonacci ratios. In my experience, adhering to these ratios is often the deciding factor in whether a wave is motive or not (other than having the “right look”). I would add these very important rules:

If the subwaves do not meet these criteria, they are most likely corrective waves in my extensive experience (much more than 10,ooo hours).

They must also have the “right look.” Let’s break down the attributes of the three waves in the diagram above:

Leftmost. This is the motive (impulsive) wave. It adheres to all the rules and has the “right look.” You can see the subwaves in each of the odd-numbered waves. The even numbered waves each have three subwaves.

Center. There are two problems with this wave structure. The second wave does not retrace anywhere near the required amount (62%—see my additional rules above) and the third wave does not have 5 adequate subwaves, as a result.

Rightmost. Both the third wave and the fifth wave only have three waves each. As important, the fourth wave is not in the correct proportion to the second wave. It is much larger, in fact, even “overbearing” when contrasted with the second wave. If either the second or fourth wave out of proportion so that one is much bigger than the other, the larger wave structure is usually labelled as an ABC wave (corrective). 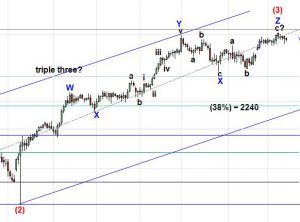 Let’s look at the third wave of the C wave from the daily chart of ES (below). You can see it on the left (click to expand).

You should be able to make out 3 subsections of the wave on the left. Wave W is actually a zigzag. So is wave Y and wave Z. There is no adequate subwave 2.

So, this wave breaks a very important requirement of a motive wave (no adequate second wave). It is therefore corrective.

Subwave 5 (Z) is very clearly in 3 waves. There’s another hard rule that this wave breaks.

This is an example of how you can look at a wave structure critically to determine whether it’s motive, or not. There are many more examples in the entire pattern from February 11, 2016 that point to this being a corrective wave. I’ve chosen one of the more obvious examples.

What this means is that we have a very fragile market before us that’s being pulled along by other forces. It suggests the fifth wave will not be as long as many might expect and that we may end  up with an ending diagonal as the final pattern.

It also suggests that once we get to the top, the wave down will fast and steep.

The charts this week have added even more clarity to the path ahead. The time I spent last weekend (a full day) analyzing the market has paid off. We've continued to follow my projections all across the board (US indices, USD currency pairs, the US dollar, oil, silver, gold, and bonds).

Above is the daily chart of ES (click to enlarge, as with any of my charts). We sit very near the top of the third wave of a large C wave. As per the information I shared above, this wave up is clearly corrective, although you'll find charts all over the internet calling the entire structure motive. This is the kind of misuse of Elliott wave that drives me crazy (and why I stay away from reading other people's charts).

We have a dramatic turn coming later this week, as it will play out across US indices, most USD currency pairs, and perhaps oil and the major metals. As I've saying for the past year and a half, all markets are becoming more and more closely aligned. Now we have situations where they're all making turns at the same time.

For my Trader's Gold group, I've laid out the remaining long and short term path for all the assets I cover. I still project a top for everything in the September/October timeframe, because recent history has provided many of the clues in each of the asset classed. They're all telling me the same thing.

Last weekend, my hours spent on charts paid off. As projected, virtually everything headed for a new high. Although we haven't gone very far in the past week, the charts have become much clearer. Haha ... by that I mean clearer to an Elliott wave analyst; they're actually way more cluttered on an hourly timeframe to the newbie, but that's because we're experiencing the added volatility of many markets making a turn at the same time.

Summary: We're in the final pattern of a third wave in ES.