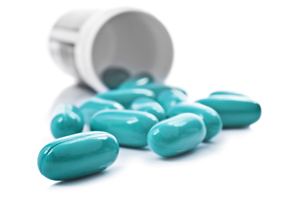 Hope on steroids, otherwise known as “Hopium” is the “placebo” of the 21st century. You’re going to see it play out as never before with the final wave up in the US indices.

Hopium creates “false” euphoria, a sense of hope that’s got little in fact to support it. The herd is on this drug “big time” right now. They’ve been influenced by the government telling them everything’s ok. Pop culture and entertainment virtually rule the marketplace. There is very little “real” news anymore. The government of the day did the same thing just after the height of the Roman Empire—placated the populace with spectacular events in the amphitheatre. The same pattern happens over and over again throughout history.

Euphoria and a positive outlook is still being exhibited by the majority, but it’s rapidly declining. There’s a sense now of the 11th hour of a party, but the truth is, the let-down at the end is going to be a rough ride—a really rough ride!

I’m particularly worried about those who’ve never experienced failure, or have minimal support around them.

There are cracks in the euphoria is still rampant as we reach the top of this warm-dry cycle, due to the extraordinary rise in the stock market and the easing of credit (Wall St. vs. Main St.). Not everyone in the herd believes the party line, though. And so we have Donald Trump and Bernie Sanders, who are both anti-establishment and fifth wave icons. Hilary represents the oligarchy—the establishment. The friction and divisiveness couldn’t be more obvious.

As the market tops, the cracks in the euphoric facade are starting to show more and more.

These cracks are more apparent at the level of what used to be “the middle class.” An immense number of people have fallen into poverty; those how are close, are living off credit cards. This is where the revolution has begun. It will soon start to spread throughout the 99%.

In the meantime, the disillusioned have turned to opioids and even scarier drugs to replace the “hopium” doled out by government and the media. It is indeed the 11th hour.

I have Crohn’s disease; I’m very lucky that way. In my seventeenth year, I spent four months in hospital. That was a life-changing experience for me, one I look back on for the lessons it taught me: You can bounce back from anything. If you fall down, success is having the strength of character to get back up. It’s a learned response.

I grew up really quickly that year.

Fast forward the my mid forties. My family doctor prescribed codeine for short-term pain, but while I was on it, I noted how much it regulated my intestinal tract. As a result, he moved me up to oxycontin for what ended up being about a five year period. Oxycontin was new on the market at the time, but the attractiveness was that its effects would last about ten hours (as opposed to the usual three and a half).

Over time, of course, I became physically addicted, a story I’ve told on stage a number of times. I was running a television production company at the time (my own) and that medication gave me continued energy to counter a disease that could easily upset the system and leave me suddenly tired and irritable. After a year or so, any “buzz” from taking the medication wears off. What’s left are the symptoms of withdrawal that set in every ten hours and give you an instant alert that you need another magic pill.

At about 5 years into the ordeal, I started to get the sense that this addiction was going to kill me. I had had weekends in which my prescription had run out and my doctor was not reachable. Scotch, I found, was about the only thing that would keep me going until the following Monday.

I confronted my new doctor with the promise of my previous doctor (who had originally prescribed this drug) to send me to rehab to get me “clean.” He blankly stared at me and told me he didn’t know how to arrange for that event. So, I came back two weeks later with a list of the dosages I wanted in a series of two week prescriptions lasting throughout that “summer of hell.”

Withdrawal is not fun. It took me about three months of dogged determination to get free of that brutal pharmaceutical creation. But in time, you get well, and the difficult days of climbing the walls, of lying on the sofa under a heavy blanket shivering from morning ’til night, gradually disappear from immediate memory.

I’m telling you this because of where society is at the moment. I see an obvious parallel.]

We’ve been put on this false hopium in the belief that it will help to cure society by raising our spirits and somehow strengthen the economy. It’s a lie, of course. I’ve put the responsibility for this squarely on central banks and governments. Some of us have become so disillusioned that we’ve opted for the real thing—and hence we have a huge opioid problem caused by the very people who prescribed hopium to begin with.

The withdrawal (the coming crash and economic devastation) will be very difficult, particularly for the younger generation, who’ve been shielded from any type of failure. They’ve never had to live through tough times and simply won’t know what to do about it. They will attempt to run to their “safe spaces” but the reality is that there will be nowhere to hide.

We all need hope. Hope is a great thing and gives us a reason to reach for our dreams. We, as human beings, have always done that. It’s why the stock market has always trended up, even taking in all the crashes. We humans are resilient; it’s built into our DNA. When we lose hope, we die.

This downturn will be a blip in history, but “oh, so real” while it affects us all directly over the coming years. False hope (hopium) is what will make withdrawal so much worse. In a time when we could be preparing the ship for the hurricane, so many are on shore partying the night away, celebrating their material acquisitions at a devastating cost to those around them.

We must change our society for the longer term so that those in charge are never again allowed to create the bubbles that harm so many. The good news in all of this is that each time we experience one of these major downturns, we achieve a higher level of democracy, but it will take many years to get there.

From the work of Dr. Raymond Wheeler:

I hope to play a little part in helping communicate the importance of understanding Earth’s natural cycles and what a tiny role we humans play at the whim of the Universe.

The coming years will be the greatest transfer of wealth in the history of the human race. I hope that many of us will use the resulting windfall to help make the world a better place for everyone.

That is a very large part of why I do what I do. Thank you all for being a part of this extraordinary journey.

And now to an overview of the markets.

Below is the bigger picture for the SPX futures (ES). 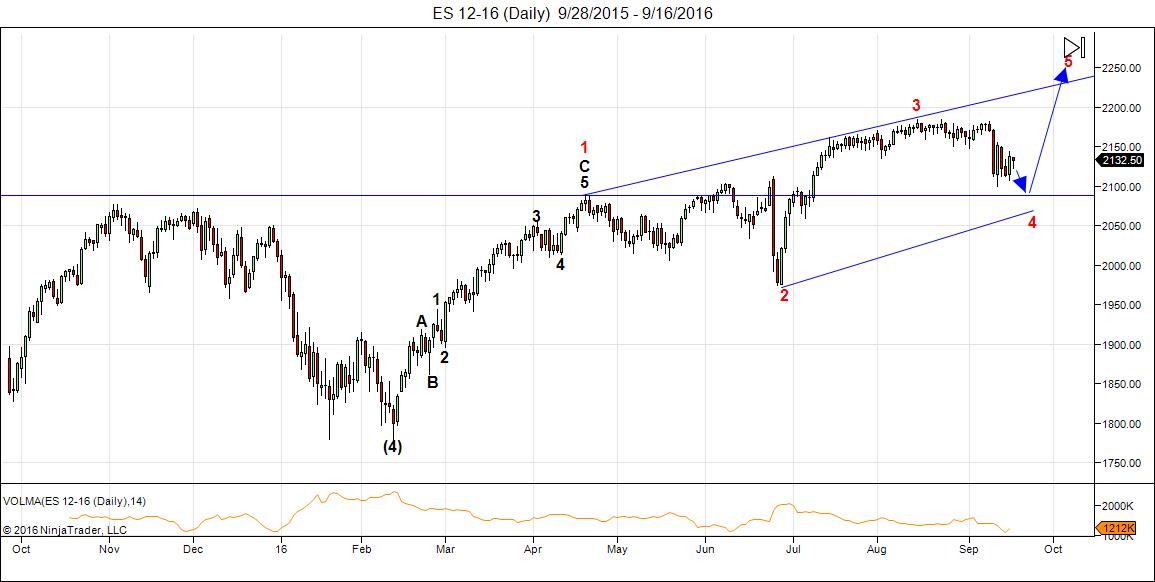 Above is the daily chart of ES (emini SPX futures) showing the ending diagonal pattern similar to the one in the SP500. We look like we’ve had the bulk of the 4th wave down. I put us in the fourth wave of the fourth wave. We have more downside to go, but not all that much.