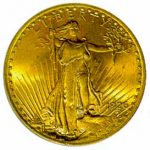 The problem with the world today is that bankers have once more gained control over virtually everything. This is what happens at the tops of these major 500 year cycles. As I’ve mentioned before, the same thing happened at the height of the Roman Empire, when Jesus upset the moneylenders in the temple. He lost his life over it. It always ends in a revolution.

Money truly becomes the root of all evil over time. But it doesn’t start out that way. The purpose of money is the put a value on good and services so that they may be “traded” between buyers and sellers as easily as possible. It was created as a tool of the population, to aid in commerce. Otherwise, trading of assets and services becomes extremely difficult.

When the money lenders get control however, it foreshadows the end of the cycle.

Money, like anything else, gets its value from its scarcity in relation to the demand for it. Just like goods and services, money becomes more valuable if there is less of it around compared to the need for it.

Therefore, control of the quantity of money in society is critical if the value is to be kept constant. In an attempt to keep the value of currency relatively constant, gold and silver were used in the very beginning. There’s only so much of these commodities on Earth and they don’t expand or contract readily. Getting enough gold or silver out of a mine to affect the overall quantity in the system is impossible.

So, gold and silver by default almost, became very attractive as a means of enabling commerce. However, it wasn’t long before the simple act of storing quantities of these precious metals developed into our current money system of fractional reserve banking. Eventually, fractional reserve banking creates inflation, which easily leads to bubbles, and in the end, class warfare.

Along the way, moneylenders invariably get the upper hand and create a system that benefits them to the detriment of everyone else. Eventually, it all comes tumbling down.

From “Modern Money Mechanics,” a free PDF publication created by the Federal Reserve Bank of Chicago.

“It started with goldsmiths. As early bankers, they initially provided safekeeping services, making a profit from vault storage fees for gold and coins deposited with them. People would redeem their “deposit receipts” whenever they needed gold or coins to purchase something, and physically take the gold or coins to the seller, who, in turn, would deposit them for safekeeping, often with the same banker. Everyone soon found that it was a lot easier simply to use the deposit receipts directly as a means of payment. These receipts, which became known as notes, were acceptable as money since whoever held them could go to the banker and exchange them for metallic money.

Then bankers discovered that they could make loans merely by giving their promises to pay, or bank notes, to borrowers. In this way, banks began to create money. More notes could be issued than the gold and coin on hand because only a portion of the notes outstanding would be presented for payment at any one time. Enough metallic money had to be kept on hand, or course, to redeem whatever volume of notes was presented for payment.”

And so fractional reserve banking was invented—a giant ponzi scheme. It’s exactly the system we have in place today.

Let’s look at an example: 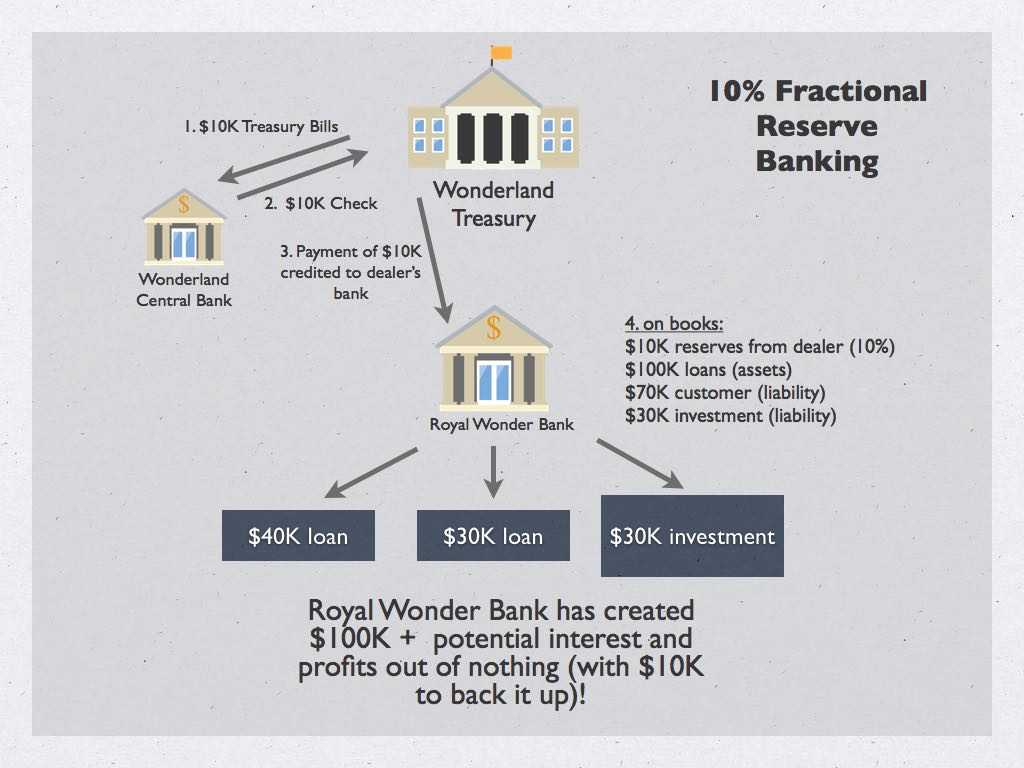 The sovereign country of Wonderland has a central bank that controls its monetary system. This is the story of how they create money and get it into the system, so that the population can put it to use.

In effect, the Wonderland Central Bank has created $10K out of thin air, which now sits as a deposit in the dealer’s account in the Royal Wonder Bank.

Since the law dictates that banks must maintain 10% reserves on any loans that they make, the Royal Wonder Bank is now free to loan out or invest up to $100K, which it endeavors to do. After all, reserves just sitting there don’t bring in any interest payments.

The bank finds willing borrowers for $70K and takes the remaining $30K and puts it in stock market investments. This creates a double entry of $100K in liabilities for the bank account deposits and investments while it creates bank assets of $100k, even though there are really no assets at all (other then the original $10,000 in reserves).

This new money has been created out of thin air and is based on the bank having 10% reserves against the loan. The loan and investment principle plus interest on the loan, as it gets paid back, is profit for the bank, as well as any realized proceeds from the investments.

As this money gets paid back, it too becomes reserves and the bank can lend out against it at ten times the value. And this multiplying effect goes on and on over time.

Now, let’s look at it from your perspective as a potential homeowner.

Now you’re tasked with finding $70,000 to pay back the loan plus interest, which in the case of most mortgages these days will amount to doubling the amount of the mortgage itself. In other words, if you have a 25 year mortgage, you will likely end up paying at least $140,000. However, if  you miss a payment, the bank has the right to foreclose on your mortgage and take possession of your home.

The bank has created money out of nothing, has effective ownership of your home, and you’ve become a debt slave. Can you think of a more unfair system?

The same process happens with governments. Based on the current system, most of the G7 countries have contracts with private banks in Europe to create money out of nothing, and loan it to the government with interest. This interest compounds of course, and these private banks have written in their contracts that the interest is to be paid back but not necessarily the principle. This creates a very lucrative arrangement that will go on in perpetuity.

Eventually the debt becomes so high that banks end up dictating government policy and it debts become impossible to pay, these countries end up privatizing their assets, and bit by bit, the banksters end up owning and running the country. That’s what’s happening in Greece.

There is absolutely no reason on Earth why these countries can’t create their own money interest-free, and create a society of prosperity and abundance for all. No reason at all. In Canada, that was exactly the case from 1938 through 1974. We only started dealing with the European banking cartel in 1974.

This system must be changed. This is the basis for the revolution that has already begun.

Projections For the End of the Rally

Above is the daily chart of ES (emini SPX futures). We’ve been in this fourth wave of the ending diagonal for 9 weeks. The second wave took 9 weeks, so the fourth wave should be nearing an end.

Usually the second and fourth waves in motive waves will be of similar magnitude (the fourth wave a bit longer) but in an ending diagonal, the waves get smaller as they move towards the termination, which is a fifth wave up to a new high, with a “throw-over” above the upper trendline. The fourth wave will always be shorter in length, but it appears that it can also be the same length in time.

Summary: This is the final fourth wave dip before the final fifth wave and the top of the largest bubble in history. We have one more wave up to a new high before the bear market gets into full swing.

Sign up for: The Chart Show
Thursday, October 27 at Noon EST (US market time)