Update (after the bell, Thursday, Jan 14) 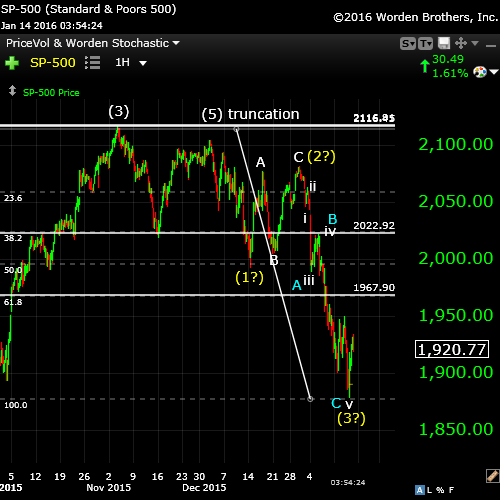 Above shows the dilemma we have as at the end of the day on Thursday. Above is a one hour chart of the SP500.

I’m showing the “mess” as the top as a truncation of wave 2 up. Wave (5) on the chart is the truncation wave. If this is the case, the next wave down would be wave (1) yellow (although it’s a corrective wave). Then we had an ABC flat up to the top of wave (2) yellow. That would make this wave down wave (3) yellow. To make the crash scenario feasible, you have to decide that wave 1 is a truncated wave and therefore doesn’t need to be motive. Because, is certainly is not, and this crash scenario requires motive waves.

I have also placed the ABC blue letters to show the the wave (3) yellow down actually reads better as a corrective wave. However, if we disregard that mess at the top and pretend we have wave 1,2,3 down, then the next wave down would be 5 and retrace to either 38% or 62%. I’ve placed these two levels on the chart (horizontal lines). This crash scenario all depends upon a truncation having taken place with wave (5).

That aside, if we have a traditional wave 1 (full wave) configuration down, then we may get a very large wave 5 down after a 38% retrace. So our watchlist going forward is first to see if the market turns over at about 1967. This is my preferred count, based on us having experienced a truncation (it is dependent on the scenario with the NYSE below).

I’ll have a fuller update on the weekend with a video.

If wave 5 turns at 38% (we may see that happen tomorrow), it would lead to an even more important update on the weekend. 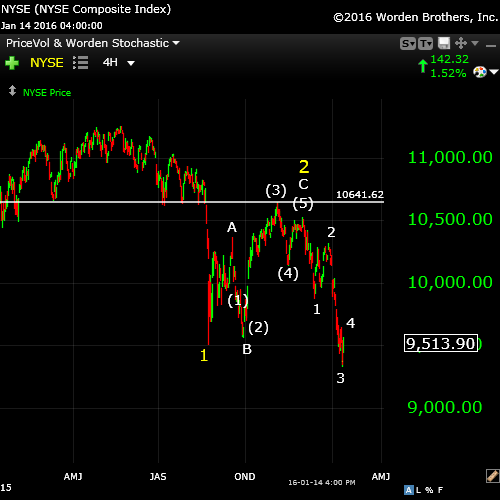 Let’s take a look at the NYSE tonight. This is the 4 hour chart.

It shows much the same setup as the major US indices. However, it’s not really tradable and so (as far as I’m concerned) doesn’t show the animal spirits that the others do and on top of that, is far larger. In fact, it’s the largest stock market cap in the world. I tend to give it the weight it deserves.

Bob Prechter came out today with his monthly Theorist, in which he described in deprth the same two possibilities I’ve outlined here (either the start of a crash, or a fourth wave triangle to a new high). He’s leaning towards the larger fourth wave triangle and a new high. You can find my charts and video scenario on this scenario below.

However, the NYSE has come down too far to make the fourth wave triangle a viable alternative. I always look to this index to give me the truth, and it’s the reason I’ve now discounted the triangle and gone back to the truncation, which is the only thing that makes any logical sense to me from an Elliott wave count perspective.

This is why my preferred count is a smaller fourth wave retrace to 38% with a fifth wave down on the immediate horizon. The next option is a rise to the 62% level, but let’s handle that scenario if we get there, because that would put us in the area of the first wave, which is a hard Elliott wave rule, meaning it’s not allowed. 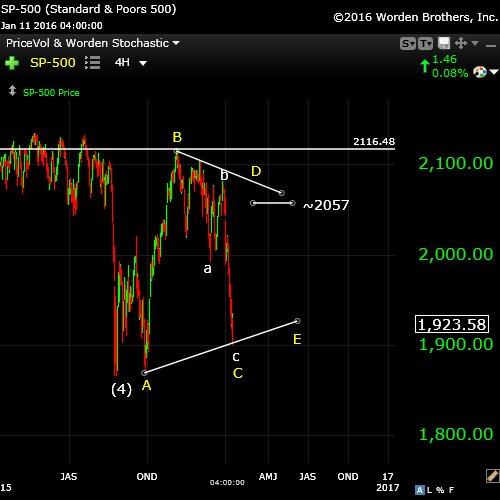 Above is a 4 hour chart of the SP500 showing the symmetrical triangle left after today’s session. Not that much has changed. If the D wave is .618 X the B wave, which is typical, then the target for this wave (a wave in 3) should be about 2057 in the SPX.

Original Post (jan 10): The last week (from December 31) has been a challenging week in terms of the conflicting signals in the market. I knew the market was coming down, but with the structure, also knew that it was NOT a terminal drop. In other words, the Elliott Wave structure (waves in 3) has been telling me we’re going to retrace this wave down. It’s been frustrating figuring out the ultimate structure.

Before the new year, the US indices suggested a truncation, because the flat (3-3-5) combination which seemed to be unfolding from Aug. 24 did not complete the fifth wave. In fact, it made a textbook truncation at the previous high. But the wave down was then in 3 waves (after a truncation, the wave down should pick up the original market intent, if heading down in a trend, and be in 5 waves, signalling it was a motive wave). It was also not long enough and came down in a tentative manner—suggesting other than a motive drop.

Finally, on Thursday, the market showed its hand and I suggested a fourth wave triangle. On Friday, it all but confirmed that idea by continuing the drop, which I forecast, but coming down to a level that is a perfect C wave level, as the next wave up (wave D of the triangle, which should be .618 X the length of the A wave) projects to a symmetrical level—right where it would hit the top triangle trendline.

I’ve put together a video that explains the big picture and the reasons for going with a triangle and a new final market high, something that was not possible with the flat (3-3-5) pattern. Only a triangle of some sort will allow for a new high, which is projected to be both very weak with a 5th wave that should be very short in time.

If we turn up on Sunday or Monday from here, the triangle will be confirmed. If we continue down, something else is happening. At this point, I don’t know what else that something could be. 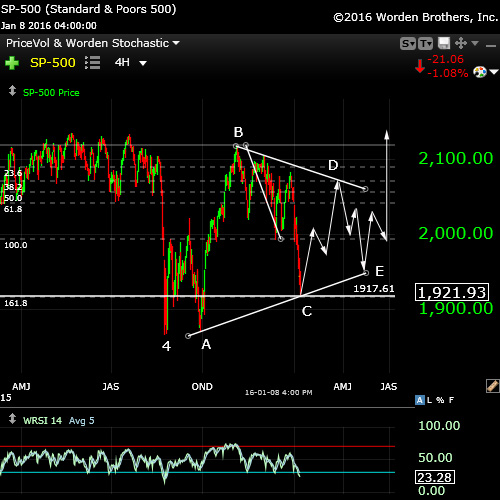 Here’s the four hour chart of the SP500 with the triangle’s projected path drawn in. You can see that what we have here is perfectly symmetrical, which a typical fourth wave triangle should be. You can also see that I’ve used the fibonacci retracement tool to measure the elements of the C wave. The extension from the first three wave combination of that wave ends right at the current bottom of the wave, suggesting  an end to the wave. The other indices have similar fibonacci wave relationships.

We are also deeply over-sold (you can see the Wilder RSI reading below the chart) and the level of bullish sentiment is in the single digits, suggesting a turn is due.

Note the the next major cycle turn is at Jan 27-29, which in my time projection, seems like a match for the playing out of the balance of the wave.

Triangles in the fourth wave position forecast the end of a major wave. There is only one wave that follows a fourth wave triangle.

Good trading while we wait to see. In any event, this market is on life support.