Here’s a big picture look at what seems to be at play for the US equities. Based on current wave structure, it’s the only pattern that fits what Mr. Elliott’s waves are telling us. With this triangle, you’d expect waves in 3.

The recent challenge has been the bearish nature of the market without any motive waves down. That’s led to a look at any alternatives to a possible truncation. I believe this is only one left.

After the e leg, we’d get a brief ride up to the top. 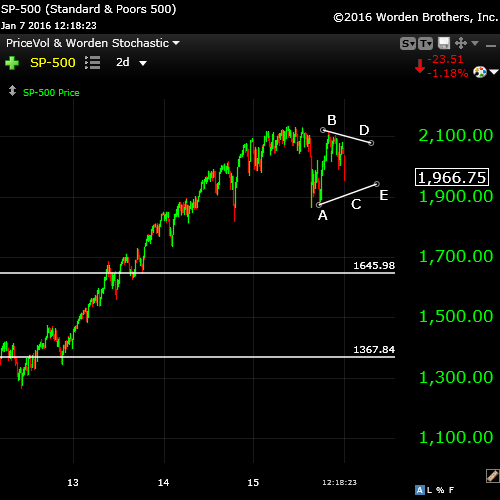 This market has been difficult to trade of late and keeps spitting out wave after wave that has a three wave structure. Triangles are the only pattern that fits that particular wave criterium. It would put a top towards the end of this month possibly. 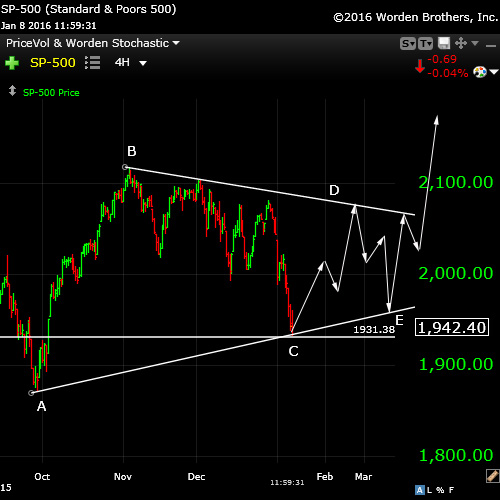 A closer look. I think the bottom of this wave is somewhere around 1931 SPX. This would make wave a and c (not shown) of the wave down the same length. ES and NQ give essentially the same stopping point on a relative basis.

However, it’s difficult to pinpoint the bottom until it actually gets there. When it does, it will define the stopping points of waves D and E. Note that wave C is almost always the most complicated wave of a triangle (which looks to be the case here).

This market just continues to amaze. It seems like every time I get it figured out and post a chart, it figures out a way to completely change everything!

In my earlier post (yesterday), I warned about the structure of this wave down and while it looks motive, there’s an issue with a fourth wave that makes me uncomfortable. It turns out that was for good reason.

Above is a 60 minute chart of NQ (emini Nasdaq futures). We just now came down to a double bottom after wandering around today in what appeared to be a triangle. This completes an ABC wave and as a wave in 3, means we’re going back to the top. Even if we drop slightly below the previous low, it will still be an ABC (in 3 waves) from the very top. Waves in 3 retrace.

(All the waves at the bottom of the charts are in 3s, so it can’t be the start of a motive continuation down.)

Summary: This wave down has morphed from a potential first wave down into a second fourth wave.

Last night, we had a big drop in what was likely the fifth wave of the first (of the third). Tonight I’ll show you three charts all revolving around the SP500. The other indices have similar configurations. 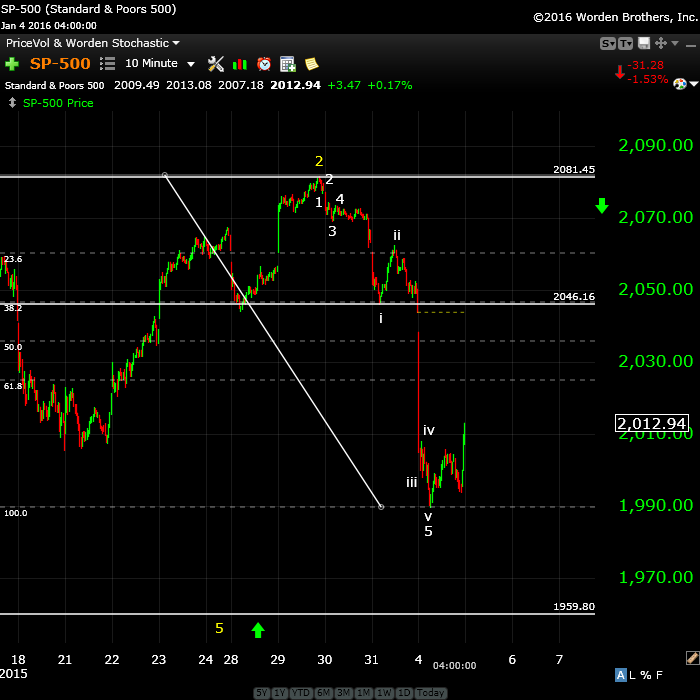 Above is the 10 minute chart of the SP500 showing the EW numbering scheme for the full wave down. The extension of the wave last night removed my concerns about the wave structure, except for one point. Wave 4 (which is really difficult to see in this chart as it’s so small) did not retrace 38% of the distance from the top of the wave, which it should have done. It was close, and this is only a guideline, not a rule, but it concerns me.

Otherwise, this is a typical wave 1 configuration, although not textbook (as wave 5 is HUGE compared to the rest of the wave). However, the fibonacci wave length relationships hold.

If this is indeed the first wave down, we should continue our retrace to the 62% level (the horizontal line at 2046.16) and roll over into wave 3 of 3 down close to that area. It would also confirm the wave C truncation and determine the path for the next few years.

Above is the 60 minute chart of ES (emini futures SPX). Even though I’ve attempted to label the wave down from last night, the upper part is difficult to decipher.

I included this tonight for a couple of reasons:

Because of the concern I have for the 4th wave, I’m staying alert to the fact that we could retrace to the top, but my preferred count is a rollover at approximately 2040 in ES. 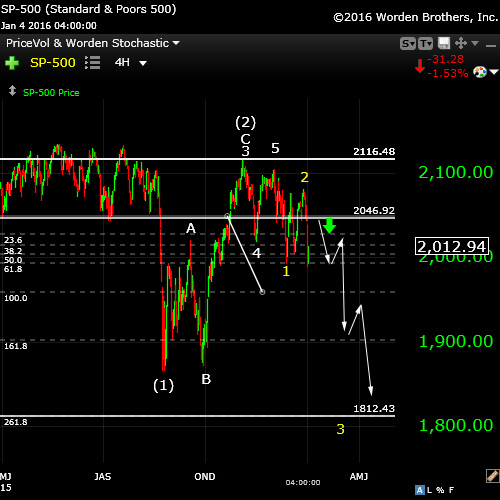 Finally, here’s the 4 hour chart of the SP500 showing the projected path if we roll over at 2047 (approx). We should head down in 5 motive waves to at point around 1812. This is projecting an overall length of the third of third wave of 2.618 times the first wave. In a bear market like this, the third wave tends to be twice the typical length. We’ll should be able to gauge how we’re doing along the route and adjust our projection accordingly.

After wave 3 of 3 is complete, we’ll rally about 38% in wave for and then roll over into wave 5 down. Much more to come after that!

Original Post (January 2, 2015) So, here we are … the beginning of a new year. Happy New Year to all! It certainly will be if you’re short (the market, that is).

Bottom line: We’re in a bear market getting ready to rolling over in a very large third wave down. While the short term charts suggest a retrace up to the most recent high (wave 2), the larger trend is down. I’m anticipating a rollover in the coming week.

The “year ending in 5” cycle failed this year. It wasn’t really a cycle anyway, as it hasn’t manifested its prescribed outcome consistently for a long enough period (according to Dewey, as least) and, more importantly, the year number is a man-made phenomenon, not a natural one. Cycles are natural occurrences.

There was also no “Santa Claus Rally.” In fact, the December performance, particularly in the last few days of the month bolsters my assertion that we have experienced a truncation. If you missed my video on that, it’s here.

From The Elliott Wave Principle, by Frost and Prechter:

“Elliott used the word “failure” to describe a situation in which the fifth wave does not move beyond the end of the third. We prefer the less connotative term, “truncation,” or “truncated fifth.” A truncation can usually be verified by noting that the presumed fifth wave contains the necessary five subwaves. A truncation often occurs following a particularly strong third wave.”

We certainly had all of that! As a result (as I stated in the video), I put the truncation date at December 2, 2015.

In the same video, I explained why the major indices cannot go to a new high. This has been a very large, corrective wave up from August 24, a position I’ve taken from, well … August 24.

Today, I want to do a short recap of where we are in the SP500 (an update of the wave on Friday, in particular).

On Sunday, January 3, we may get a continuation of the move down. I could see us dropping to 2023 in ES before turning back up. 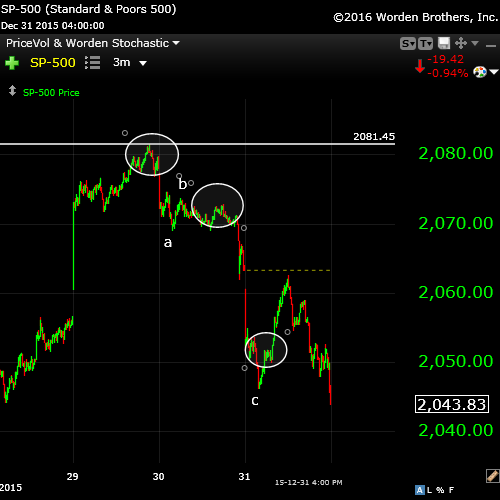 Above is a 3 minute chart of the wave down in the SP500 on Thursday and Friday. There are three areas that are of interest in what eventually ended up as a corrective wave.

The first was at the top of the first wave down. I had mentioned in a comment that the first wave was in three waves. If you look carefully, you can see that’s so. EW, being fractal, requires waves of 5 at each level of a motive wave, which is the kind of wave we’re looking for to mark the start of a downturn. This signalled early on that we were probably looking at a corrective wave. However, it continued down.

When it got down to the c point, I had thought (without the time to measure) that we might be looking at a first motive wave down, as at first glance, it looked like a typical first wave configuration to that point. However, the middle circle shows what would have been the fourth wave. The problem with that potential fourth wave is that it must retrace 38% of the first wave down, which it did not (that’s a hard EW rule). It was short.

When I caught the bounce wave up, I noticed that it only went up in three waves (the lower circle shows the b wave) and once it rolled over, that was a signal that it would likely come down to at least the previous low, which it did. Waves in 3 retrace.

For a wave to progress, it has to be in a motive wave of 5 waves. Otherwise, it’s going to retrace.

That wave up from the c position also negated any chance that it was a motive wave, as now we have no large second wave to balance off what would be a fourth wave. So, the conclusion (for a number of reasons) is that we have a corrective wave down and we’re heading back to the previous high at approximately 2081.

I had mentioned in my video of the previous day that I expected the current drop to return to the top and cap off a second wave. That’s still my expectation and supports my count in that video.

However, I would expect a turn there to be the start of a third wave down. 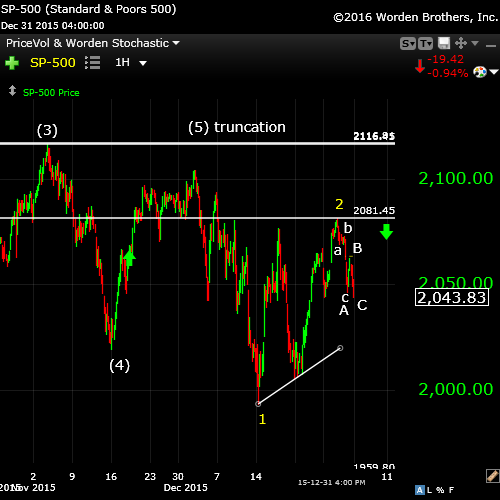 Above is a one hour chart of the SPX showing what appears to me to be a truncation on December 2. If you look closely at the wave up starting from (4), you can see the five waves. In the final fifth wave, the individual waves are present, but they’re not full length, which parallels Prechter’s description of a truncated wave at the top of the post. 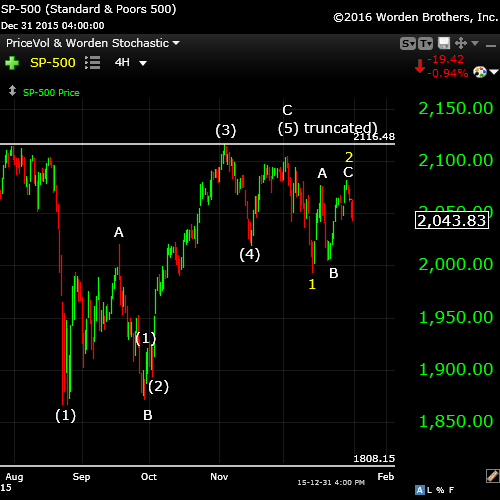 Here is the bigger picture—a 4 hour chart of the SPX, showing the  corrective flat (ABC) from August 24 to where we are now.

My preferred count shows us extremely close to a turnover.