Update Wednesday, Dec 30 After the Bell 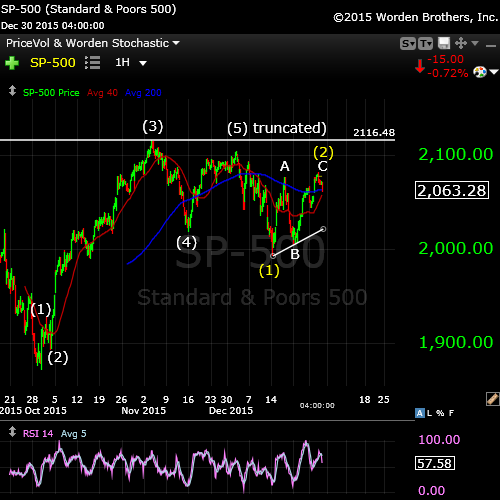 Wow! This is quite the market. I’m planning to do a little video on it later today. Let’s look at the SP500 as at right now. This is a one hour chart.

It suddenly dawned on me today what I’m looking at. While I had thought the truncation took place on Dec 17, it was actually in Dec. 1. You can clearly see the five waves up in wave (5) but the last wave didn’t complete and left a 3 as the final wave. Then we have a first wave down (a bit messed up—not motive, due to the truncation). You can see the subwaves clearly—they’re just compressed.

After finishing wave 1 down (it came down to exactly the right spot—the bottom of the previous fourth wave), we traced out a corrective second wave in two legs (ABC). I’m expecting this wave to top tomorrow, leaving a third wave down set up for the beginning of next week. It’ll be the hangover to the party that’s gone on for way too many years …

Another chart of ES. I can’t get the idea of a flat (3-3-5) idea out of my head. But  this would bring us back to the truncation idea. This would be an a/b/c pattern shown here, which would end where I have the c on the chart, ending in a double top. This would lead to wave 3 down. We’ve lost all our momentum, so all I can suggest is to watch for a turnover at this previous high. It might not happen, but there aren’t a lot of options that I can see at the moment …

Things are certainly getting interesting, but it’s more difficult to figure out a valid count. Above is the 60 minute chart of ES (SPX emini futures).

Overnight, we seem to have broken through the upper trendline of the triangle and so I’ve relabelled the waves as if this is a final motive 5th wave up, but I have reservations about the count.

We may have completed wave 4 of 3 yesterday, but wave 3 is still short. Within this wave, wave iii is 1.6 X wave i and if wave v ends up the same length (as it normally should, it would take this third wave to 2088 ES. At that point, wave 3 would be slightly longer than wave 1, which is good. However, this leaves a question as to what’s going to happen with wave 4, which  cannot retrace into the area of wave 1. I don’t see how that’s possible, so we’re going to have to wait to see how this unfolds.

In the meantime, the trend seems to be up, which was the long term plan, anyway. The secondary indices (IWM, etc.) seem to have corrective (abc) waves unfolding, so they may have already topped. There are only a few stocks keeping the cash indices alive.

This market is a bit of a mess, so it’s difficult to figure out how this last wave will tie into the bigger picture, but we seem to be in the final stages of this year-end dance.

This wave we’re currently in could be a fourth wave leading to a fifth wave but, as I’ve mentioned before the b wave up on the chart below, ES does not look motive. For this to a be final wave up, it would have to be a motive sequence of 5 waves. Due to the questionable look of the b wave, I have focused on the triangle pattern that seems to be unfolding. All the futures and cash indices are forming the same pattern.

Currencies:  I am long AUD/USD which turned up at the end of the day, as did EUR/USD. Currencies continue to move contra to the equities market. They should continue up overnight.

Elliott waves are amazing! When you think the market is going to keel over, it just doesn’t—not until the final prescribed wave is complete. In this case, we have a regular flat pattern, which is the 3 wave corrective pattern up from the Aug. 24 low.

The final wave of this patter (3-3-5) has to be in five waves and we simply haven’t finished that fifth wave.

But with what looked like a short motive-looking wave up and then a motive-looking first wave down, I declared a truncation. But I did that with the warning that the fifth wave was short (and in three waves—requiring a longer wave to make it work). Alas, there was no follow-through. 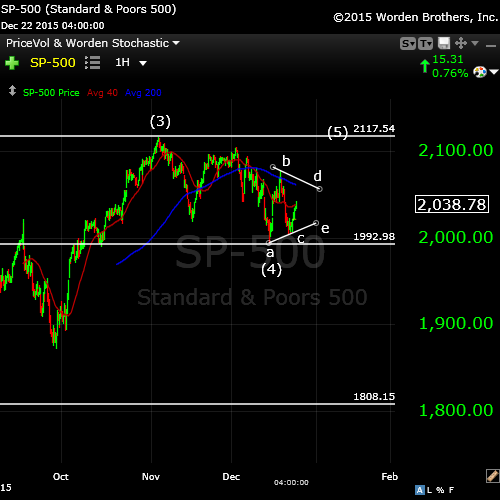 A day later, after scratching my head a good bit, I introduced a final triangle as an alternative (shown above), although very early in the process, as it only had one leg up completed. A triangle pattern can add onto a fourth wave pattern and would signify the final pattern before a fifth wave up.

The waves will finish their journey. They almost always do. I only know of a couple of real truncations over several decades.

Well, now all the indices in cash and futures sport the same pattern, so it’s becoming rather obvious to me that this is ultimately what’s happening. There’s a possible alternative, but it would result in the same end—a new high just above the previous wave 3 high.

Today, I’m doing the rounds and showing the final pattern in a couple of e-mini futures markets and four equities indices (The NYSE shows a slightly different pattern, included at the bottom).

Here’s a 60 minute chart of the ES (SPX futures). This formation has been obvious for a couple of days now and with this morning’s action, it made the triangle more or less symmetrical.

The d wave up here is not a motive wave. After a close look at the b wave up, you can see that the final set of waves (the fifth wave) is actually in 3 waves. Much harder to make this distinction in the cash indices. But they all must move together, so I often look at them all to come to a conclusion when the waves are difficult to decipher. 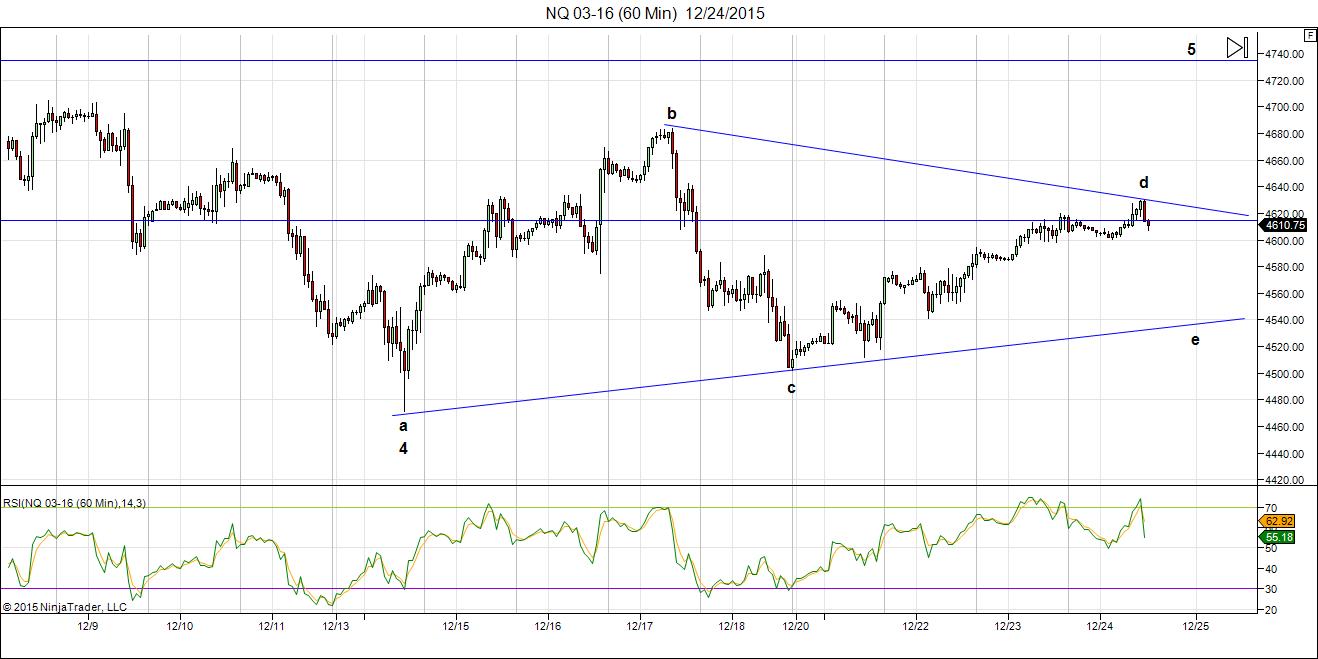 The 60 minute chart above of the NQ (Nasdaq e-mini futures) was out of alignment until this morning. Now we have a perfect horizontal triangle. I would expect the same action here as all the other indices. 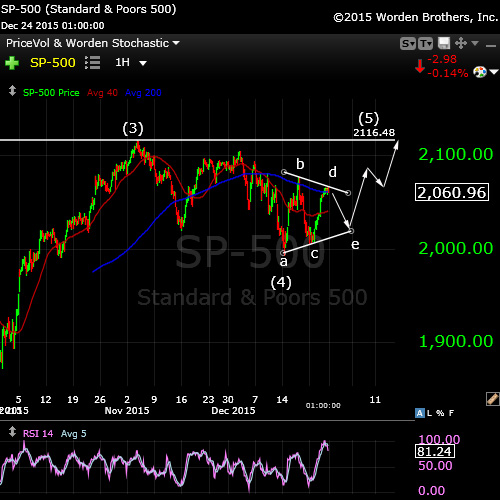 Here’s the updated one hour chart of the SP500 triangle I introduced last week. It’s now progressed to the point where we only have one more leg down before a final wave up. It also seems to line up now with all the other major indices. I’ve drawn in the probable path. 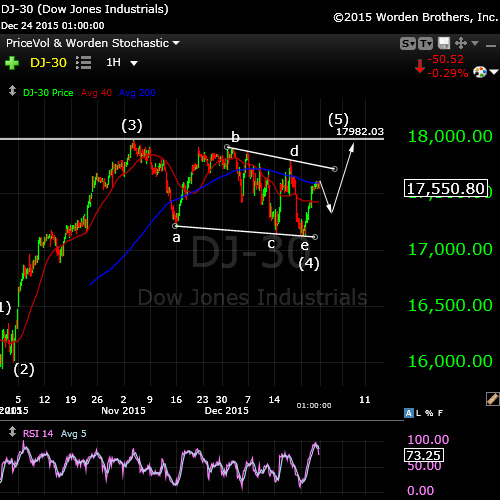 Above is the one hour DOW chart. This is the chart that seemed out of alignment with the others, but when you realize that the smaller triangles in the other indices require a leg down, as does this index, it puts them all in alignment for the final wave up to the top.

All the indices should be in alignment for the final wave up to the top and that’s what I’ve been so concerned about figuring out. I wouldn’t be surprised to see the top right at the end of the year! 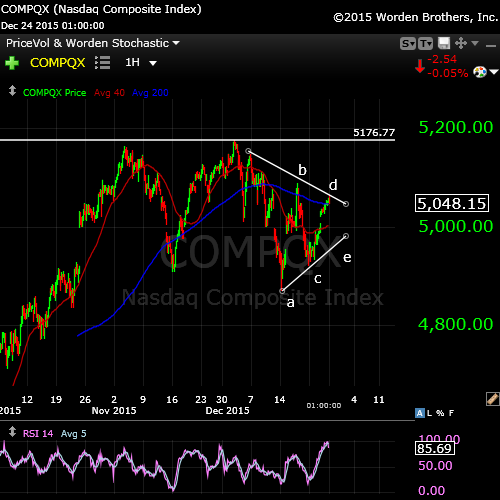 The one hour chart of the Nasdaq shows the same pattern unfolding. The Nasdaq has already topped, but it looks like we have a final top to go (likely a double top). I expect this pattern here to end up the same as the others. 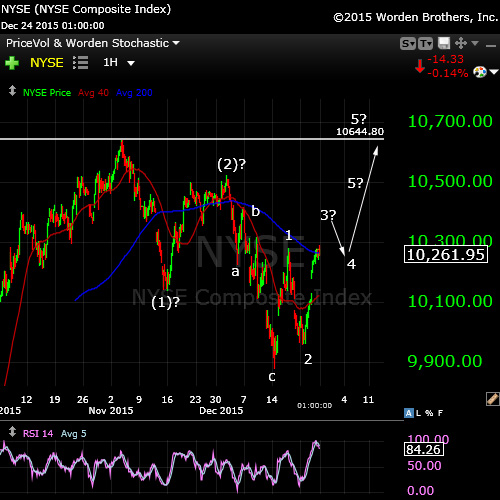 My preference is for the NYSE to do a double top like all the others. However, the third wave is short at the moment and so I can see a possibility of a double second wave forming (a move up to the same level as the (2) and then a roll over). Either way, the wave up should be in five waves.

Another interesting week shaping up heading into the new year.