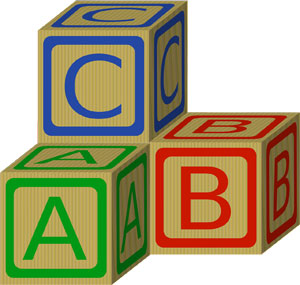 I’m often amazed at the skepticism that sometimes arises as to my calls regarding corrective abc waves vs motive (impulsive) waves. And then, upon reflection, I realize that, in terms of Elliott Wave, it was probably the most difficult aspect of EW analysis to feel totally comfortable with.

It probably took me a couple of years to ascertain that every corrective wave completely retraces (except for specific exceptions I cite below).

There are three parts to becoming a believer:

Unfortunately, the only way to become an expert on identifying three wave moves is to spend the time in the market, doing post-analysis on anything that you identify improperly as corrective.

It takes time, but it’s the most valuable skill you can develop as an Elliott Wave trader. All the rest is “advanced” — the patterns, fibonacci lengths, etc. You can be profitable just being able to identify motive vs. corrective waves.

There are two types of 5 wavers — impulsive (motive) and “simple.” Simple five-wavers don’t need to have 5 waves with each of the impulsive sub-waves (ie — waves, 1, 3, and 5). Since we’re looking for a C wave down (as part of an expanding flat), the waves will have to start as impulsive-looking waves. Anything else will most likely be corrective and retrace back up to the top. 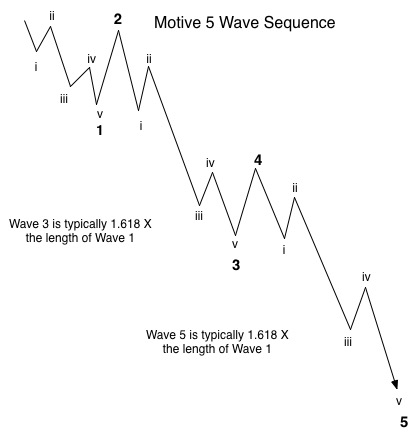 The diagram above shows an impulsive, bearish wave to the downside. This is the kind of wave we’re looking for to wake us up that a top is probably in place. The final confirmation is a 62% retrace (in three waves—an abc correction), which becomes the second wave. The second wave must retrace at least 62% and typically does not rise above the 76% level.

There’s an alternative first wave pattern that’s similar to the pattern above—it’s a variation in that the first wave extends and becomes as long itself as the first three waves down. You can find that pattern here.

If the wave down doesn’t match either one of these patterns, the probability is high that it’s corrective and will fully retrace. Corrective waves always completely retrace unless they’re within a pattern, such as a triangle, flat, zigzag, or diagonal.

You can trust that to happen at any degree of trend, in any asset class or exchange anywhere in the world, since the market was first accurately tracked.

We've now gone sideways in ES for two and a half weeks. In fact, we're in exactly the same place we were on February 5, 2020.

Since the Elliott Wave Principle doesn't include a reliable time component, identifying the date of the top is a fool's errand. I can tell you the top price (although it's proprietary information reserved for my Trader's Gold clients), I can't tell what day we'll reach it. I can tell you it's only a few points above the current all-time high.

You can also get the info on the projected top tick by signing up for the Chart Show below (which happens every Wednesday an hour after the US market closes).

I still get unsolicited emails from people who simply cannot understand that concept, and obviously don't read what I write. So be it. I can't change it, so I don't worry about it.

But, as I've been saying on this page for many months, all the US indices must reach new highs before the market turns down. The US Dollar also has to get to its target, along with oil, silver, and gold. Then we'll get the turn.

The message here is that (again, as I've been saying for many months), all asset classes (even international exchanges, like TSE, ASX, DAX, etc.) I cover are going to turn at the same time. They must all end up at their individual pre-identified targets at the same time. It's like herding cats.

But, every week, they all get a little bit closer, as SPX keeps going sideways. It's will all end very soon, but the top will be seen on hourly charts, not dailies, because we're that close.

So, the next high by all the players I've mentioned here will result in a thousand dollar drop in ES, and similar plunges in related US indices (and many international exchanges).

Summary: The current B wave up is most probably the B wave of an expanded flat. The A wave ended on Jan. 26, 2018. The B wave rally has all but ended, as other asset classes I cover have turned, or are about to turn after the current sub-wave completes.

We're going to drop from here into a large fourth wave. Look for the ultimate bottom to be somewhere under 2300 in ES.