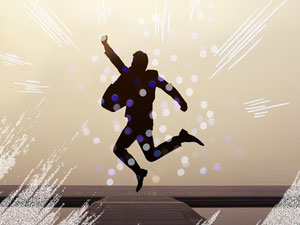 An Unusual Pattern (to say the least!)

As we’re so close to a top this weekend (and there’s virtually nothing to trade), it’s time to look ahead at where we’re going, both in terms of the market and what’s going to happen to society.

First, the US indices.

We have what appears to be a large expanded flat, beginning with the top of the A wave on October 3, 2018 and the bottom of the B wave at Dec. 26, 2018. That part looks textbook. But then we have this enormous B wave that has kept on going, farther than what is normal.

So here’s the dilemma: Is the C wave down going to be the same length as normal (a C wave that is a maximum of 165% of the A wave, or it is also going to go to extremes and drop even further? That’s the question! And I don’t know the answer.

If we end up sticking to the guidelines and the C wave maxes out to 165%, it will land around 2250. On the other, we could drop as low at 1800, if we put in a traditional fourth wave that retraces to the previous 45h wave of one lesser degree. A dilemma, for sure.

However, after the first wave is in place, all the subsequent waves will have a fibonacci ratio to the first wave, so that we should be able to relatively accurately define the path ahead. I’ve followed the same process to define both of these sets of waves down.

The bottom line is that it’s the first wave that’s the important one. Once we have 5 waves down and start a bounce, the corrective second wave will rally at least 62%. It usually puts in a  top that seems to last forever, just like this top has. But the downsides will be swift. I expect the entire drop to be over in about 3 months.

My attention is starting to turn towards the longer term.

Corruption is always very high at 500 year turns. The last turn was in 1492, where we had  Columbus discovering the New World, at the same time as the Spanish Inquisition. There was also a financial meltdown. And right after that, we had Henry VIII (who was so similar to Donald Trump, it’s incredibly eerie. I refer to Trump as the reincarnation of Henry VIII. History does indeed repeat.

It’s going to be interesting to see the change in the current eurphoria in the US as the market melts down. That may be some fun, but it may be the only fun.

Pandemics are starting to raise their ugly heads and there will be more of them during the next fifty to one hundred years. They crop up and become more deadly when climate turns cold (although this one appears to be man-made, and is earlier in the cycle than one would expect).

Pandemics also coincide with upheavals to the food system, so that more people are poorly nourished. They also come at a time when people are poor and the financial system is at its weakest—the perfect storm, so to speak.

A description of one survivor’s experience in China.

So, eat well, and take precautions for times ahead when food shelves may be bare. And be sure to follow an exercise routine—very important. Medical systems we count on are also going to be impacted over the next 20 years.

My upcoming webinar (which I hope to get posted this weekend) will provide insights on what you can do to prepare.

Expect more disruptions to business as this market starts to implode over the next few months. A lot more businesses will be announcing they’re shutting down. The conveniences we’ve come to enjoy in so many areas are going to greatly diminished over the next few years.

The large drop we’re expecting shortly is going to affect mortgages and the financial system. I’m going to start warning about this  more often. We may see some bank failures at the bottom of the fourth wave, although the real financial panic will be after the final high, in about another year, or so.

Transporation is starting to implode. This will affect energy, depending upon where you live. If trucking companies are going under, don’t count on fuel deliveries on schedule (or bottled water).

Of course, governments are doing everything they can to destroy the energy industry just at the time we need it.

“At the extremes, the herd is always wrong. One should not under estimate its capacity for stupidity.” — The Secret Life of Real Estate, Phil Anderson

Central bankers are completely nuts; they’re out-of-control. They’ve created so much debt that they’re simply out of ideas as to how the keep this house of cards from imploding. Implode it will; there is no solution.

At the bottom of the fourth wave (when we hit the area under 2300 in SPX that I’ve been predicting), I expect to see a massive injection of liquidity, so that the market heads back up for one final kick at the top, before keeling over in what promises to be the most devastating financial meltdown in history. Hopefully, it will be catastrophic enough to end humanity’s experiment with fiat money — something has been tried over and over again throughout history, and has ALWAYs failed.

In any event, we’re going to need a new financial system eventually, but any thought that this new system will be introduced without extreme pain for a very long time, shows no understanding of the depth of human ineptitude.

It will be painful, a lot of lives will be lost, famine and disease will be rampant, but we’ll have the opportunity to learn from this mistake. And, if history is any teacher, we won’t.

Monday is a holiday in the US and markets are closed, but we may see some movement in currencies before Tuesday (they all have targets to reach before we get a turn in equities).

All the US indices (again, as I've long maintained) need to reach a new high. The stragglers are the Russell 2000 and the NYSE exchange itself (certainly no surprise in either case; they're typically the ones we wait for).

It's now a day-by-day watch for a top.

But since everything should turn together (oil, gold, silver, US Dollar, USD currency pairs, and the US indices), there will be some warning. It's also just as easy to pay attention to the wave count, which it almost completely played out.

The DAX appears now to be at the top of an ending expanding diagonal, with a turn to the downside imminent. It will also turn with the US indices. It's going to be quite the drop, as virtually everything will move in tandem.

Summary: The current B wave up is most probably the B wave of an expanded flat. The A wave ended on Jan. 26, 2018. The B wave rally has all but ended, as other asset classes I cover have turned, or are about to turn after the current sub-wave completes.

We're going to drop from here into a large fourth wave. Look for the ultimate bottom to be somewhere under 2300 in ES.