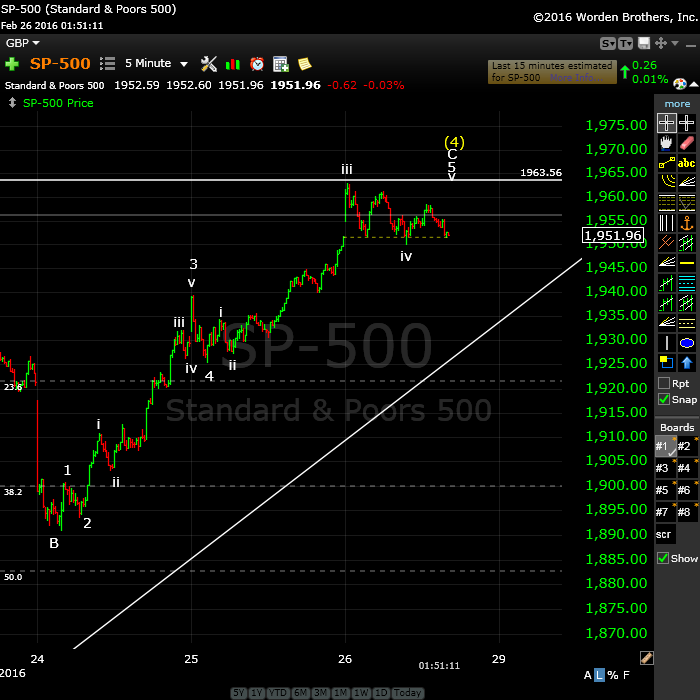 Here’s the 5 minute chart of the SP500 so you can see where we’re at. We’re in the final 5th wave of a motive wave up. 5 waves spell the end, but it’s not quite complete until we rally back up to this morning’s top. All the subwaves measure correctly. We remain patient. 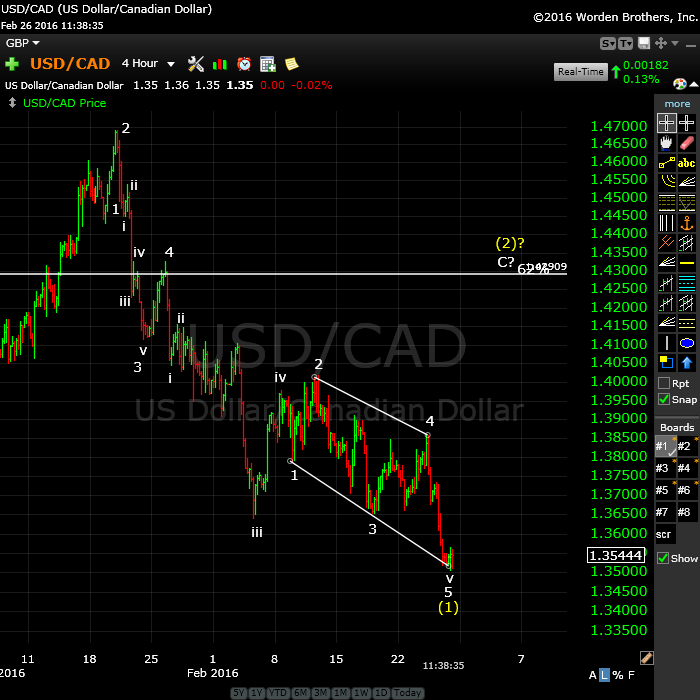 As a comment on this market, here’s 4 hour chart of USDCAD showing the inflection point we’re at, very much like the one for EURUSD. This currency pair should turn up to complete a second wave. Strange motive configuration (it’s actually countertrend) but it works.

Update Friday, Feb 26, Before the Bell

We’re at the projected target. I expect a double top this morning and we may see an opening gap reversal in the cash indices. Eur/usd has come back to what I also expect will be a double bottom. The EW preferred entry point is after 5 waves down at small degree and three waves up (a second wave). Good luck.

This 60 minute chart of ES is at approx. 3:15 EST, just before close. Because of today’s wave up, which has turned into a “3” in futures, the overall pattern has turned into an ending expanding diagonal. Extremely bearish pattern. 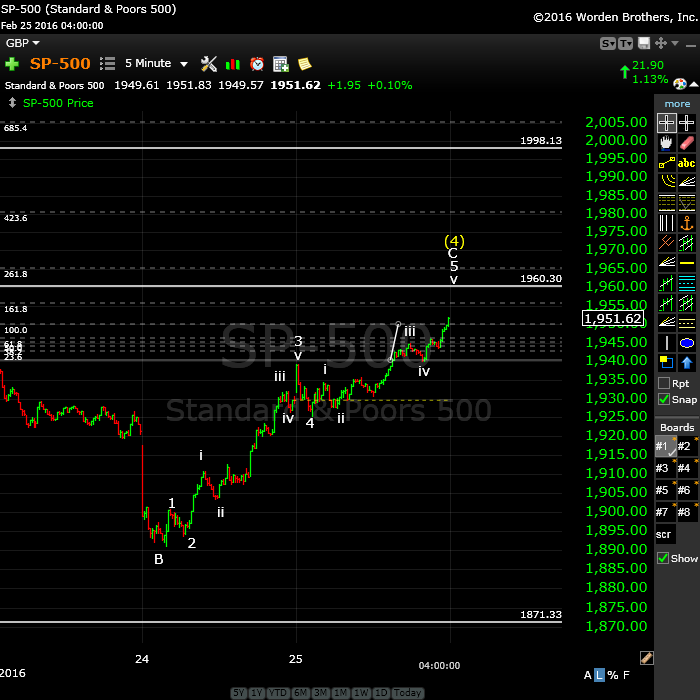 Above is a 10 minute chart of the SP500 (updated at market close)—showing the motive subwaves leading to a top after the fifth wave. The 3rd wave up was exactly 1.618X the first wave and if the fifth wave continues to its full length (1.618 X the first wave, as well), the target will be about 1960/1. It may not necessarily make it that far. I’ve renumbered the subwaves to more adequately match the underlying wave structure.

On the other side of the coin, eur/usd seems to have turned and is possibly completing the second wave after a motive first wave up. They should all turn more or less together.

Update Tuesday, Feb 23, After the Bell

Above is the 30 minute chart of ES. This chart shows what I’m seeing in the futures markets and in the Nasdaq. The SPX and DOW are slightly different and may just be setting up for a top at the previous 4th wave high. All these ending waves are in 3s and this suggests the ending diagonal, which would head up in three waves with a likely overthrow past the trendline to a new high. They result in a dramatic turndown.

This should turn over tomorrow (likely) in the long-awaited fifth wave down of the much larger first wave from Dec 31.

Update Feb 22 Before the Bell. 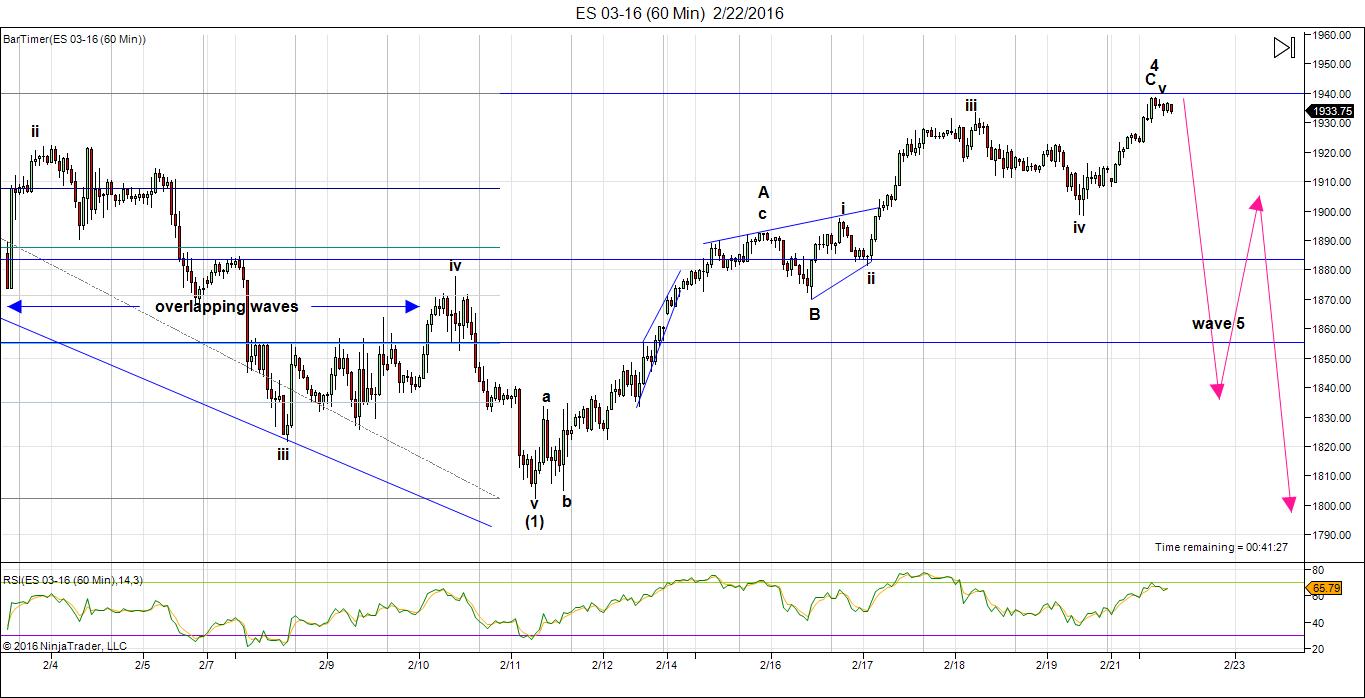 Above is the one hour chart of ES (SPX futures). Watch for a turnover this morning at the previous 4th wave high. All the cash indices, as well as futures, would have to make that previous high, so don’t get in too early. There is still the possibility that we go higher. However, we’re within the cycle turn forecast and have just about met the price target.

Note: The Nasdaq may not need to reach a new high as it’s the only one of the indices that could be considered to have completed 5 waves down.

Also eurusd is has reached its objective.

The safest entry point is after 5 waves down at small degree (a very small first wave and then a second wave of 3 waves up to about 62%).

Original Post:  First waves of a sequence are interesting animals. Few “wavers” get them right. That’s because there’s no written mention (that I’ve found) of the fact that they’re different than the rest of the motive waves in a sequence. They’re often mistaken for waves “in 3,” because without a careful and thorough look (right down to the one minute level), they look like an ABC corrective wave. They certainly have the same overall measurements. But … they’re in 5 waves.

You won’t find a mention of them in the Elliott Wave Principle book. But they’re real. I’ve watched them form over and over and over again during my 20K hours of watching the market.

First waves come in two parts. You get a set of five waves down (in a bear market), but they’re not quite complete. The five waves don’t measure out properly to each other in terms of their expected fibonacci ratios.  It’s the fifth wave that’s the problem; it’s usually too short. That’s your clue.

That’s what we appear to have here. I’m expecting the other shoe to drop this week … to give us the fifth wave down to complete the first wave.

A complete motive wave to a “waver” is the holy grail. Because it tells you the trend has changed and that you can expect three more larger waves in the same direction, at least. And they’ll be highly predictable waves, because they always follow the same pattern. It’s only the first wave that’s the devil to get right.

My major cycle date is the second part of this week. I’m expecting to see us tag the previous 4th wave high and roll over into a fifth wave. That fifth wave should drop 300 points in the SP500 and over 2500 points in the DOW.

It won’t quite wake up the sleeping herd. It may give them a bit of a jolt, but they’ll go back to the party, because the second wave that follows is going to come right back up to where we are now and everyone will breathe a sigh of relief. Everyone but us.

Here’s a video overview of the market as at Monday, February 21:

I’m providing only two charts tonight because the video pretty well says it all and the markets are all moving as one, so more charts really don’t add anything to the forecast. I will be putting long term charts in the Forum this weekend, so if you want access to those, you’ll need to join. The Forum is here. 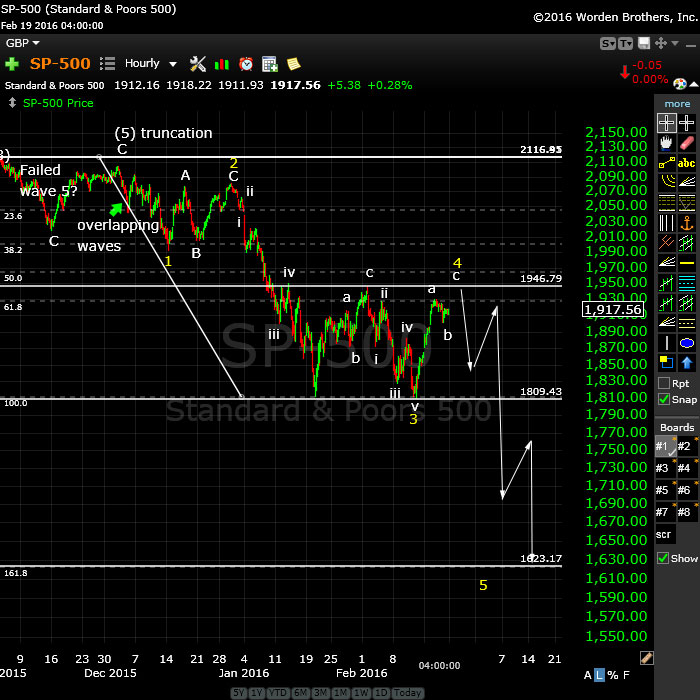 Above is the one hour chart of the SP500. The primary count shows us topping at the previous 4th wave high (about 1946-50). There is an alternative that will see us going a bit higher, to the 62% level, but that’s not my expectation at this point. That would be second wave, but I think the first wave needs to finish its work first.

Watch for another small leg down Sunday/Monday in futures and cash to at least the 38% retrace level before heading up to finish the current C wave. I cover this in the video.

The fifth wave of the first will drop substantially (and fairly quickly) to the 1620 (at least), before we get a second wave that will retrace right back to where we are now. 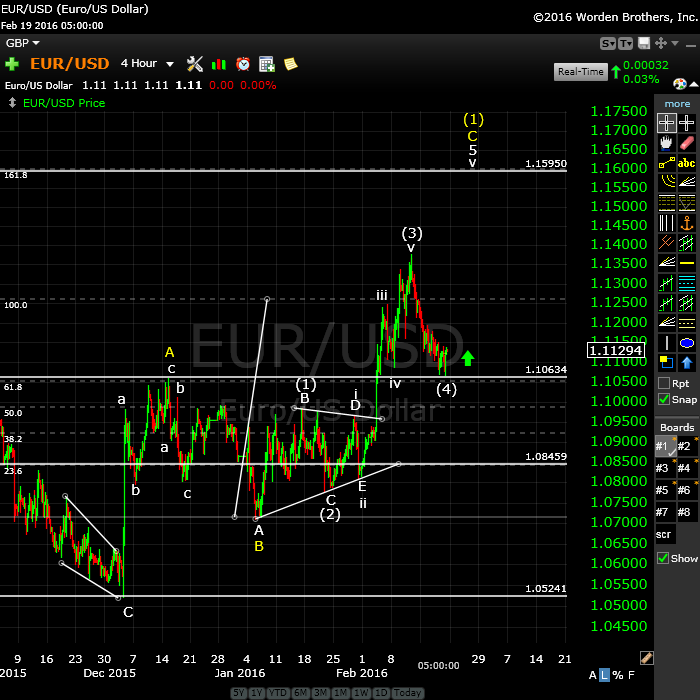 Above is the 4 hour chart of the eur/usd. It’s interesting that it’s an exact reflection of the US equities at this point. I also place it in a 4th wave. With the euro, as with equities, there’s the option of a second wave retrace. In that case the euro would drop to the 1.08459 region before turning up in earnest. The chance for that to happen will be when the equities trace up to the previous 4th this week. Otherwise, expect the euro to sit here a little longer.

The eurusd is in a countertrend (corrective) wave and I expect it to rise in the medium term, and for the dollar to head down. The longer term prognosis is the for the dollar to rise, but not until it at least retraces 38% of the previous large wave up, which it has not yet done. The euro is in the same boat, but in the opposite direction

This weekend, I expect to flesh out the forum. You can join now. There’s a link to the sign up page in the menu at the top of the Forum page. I will create more signup links on the weekend. You can only post if you’re a member.