When Bears Roll Over … 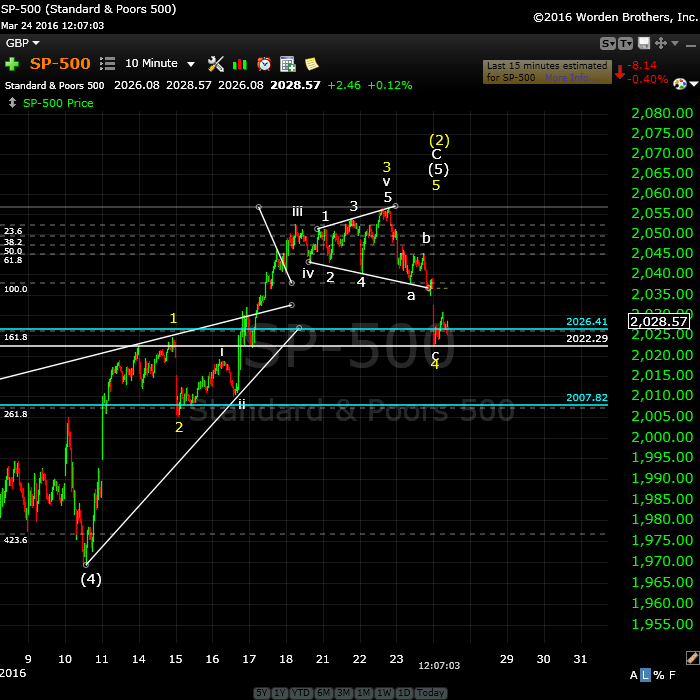 Above is the 10 minute chart of the SP500 updated through this morning. Comparing this chart to the one below, you can see that we’ve fallen out of the ending diagonal into a full fourth wave. This will be the final 4th wave, correcting the entire 5th wave up. I’ve relabeled the chart so you can get a better idea as to where we are.

I’m labeling the smaller ending diagonal as the termination of the third wave.

The wave down yesterday and today is a corrective wave, denoted by the abc labels. There are a number of reasons. The length isn’t as expected, there’s no adequate 2nd wave of the fifth, and the first wave isn’t motive.

In terms of the length, I’m referring to wave ratios. I’ve place a fib tool on the chart to shown that when you measure wave a, wave c doesn’t come down to either of the expected blue lines. It’s an odd length. A motive wave always hits those wave ratios.

This means that over today and the weekend, we should climb back up to a new high (in a five wave sequence). I don’t have a target for a top. Each of the preceding waves are getting shorter. As a result, I wouldn’t expect this fifth wave to go much further than a new high before turning down. 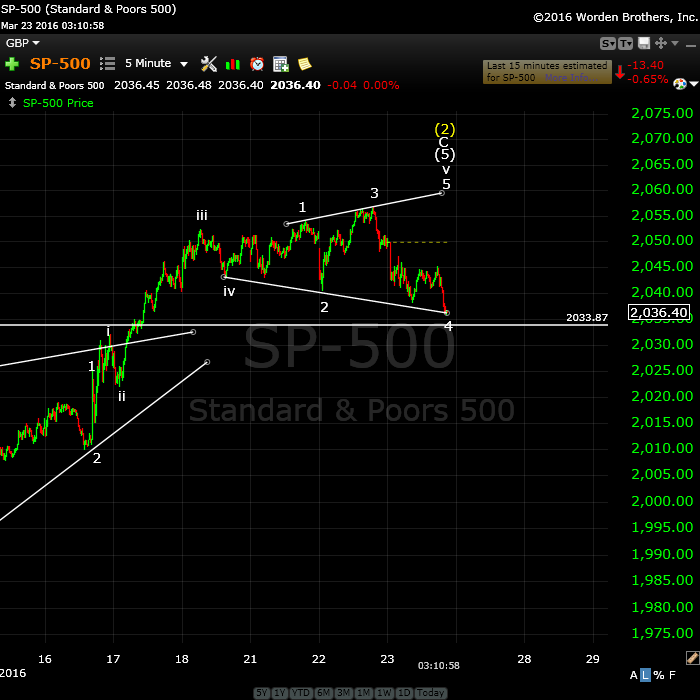 Above is the 5 min chart of the SP500 showing the latest drop, which seems to have confirmed what was shaping up as an ending expanding diagonal. It required one more wave up to a new high and then we’ll have a dramatic reversal. The wave up should be in 3 waves.

It may do a throw-over, meaning it will likely exceed the upper trendline.

One more thing I’m noticing, which speaks to opportunities in currencies.

USDCAD looks to be near the top of a fourth wave. When it ends. it should retraced to a double bottom.

EURUSD is in the same position, but in the opposite direction.

Update: Monday, March 21, After the Close 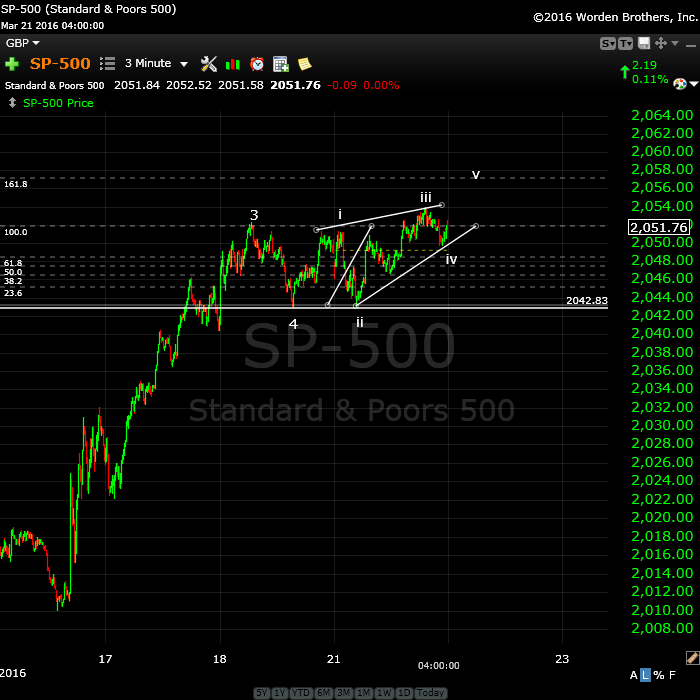 Above is a 3 minute chart of the SP500. Well, we’re certainly into the weeds at this point—the small stuff. I see an ending diagonal taking shape with one more wave up to go. We’ll need to watch the opening as we could reverse immediately, if we’re sitting at a new high in the 2058+ area.

The indices and futures are all at similar relative levels. The top is high. The cycle turn date is tomorrow, the 22nd of March.

When bears roll over, watch out! They crush anything underneath them.

Bear markets come down far faster than bulls head up. In the coming third wave, surprises are going to be to the downside, so be very, very careful if you decide to play a retrace up. Also keep in mind that “waves in 3” retrace completely, so you want to count three waves up before entering a short trade. We call third waves the “nowhere to hide” wave.

Late in the week last week, bullish sentiment rose to 81%. That’s the highest it’s been since November 26, 2014. It’s consistent with a top. Volume continues to be about the lowest it’s been all year. The VIX looks ready to give a sell signal, which happens when it hits new lows.

Today’s video is a bit longer than usual (18:03) because I wanted to spend some time on an alternate scenario I deem to be very low probability. Nonetheless, I wanted to give you a head’s up that it exists and also give you a “wrong count level,” which is 1900 in the SP500. If we happen to turn at this level and head up substantially, we are not in a third wave down.

I also wanted to provide the reasoning behind why I consider it low probability. The key is that a final wave of a sequence has to be in 5 waves. The wave up from Feb. 11 is in 3 waves, and the structure of it will always be a “3.” The only way that wave can be part of a new high pattern  is if the patten is a triangle. Only three indices could possibly fit that scenario (NDX, Nasdaq Comp, and the DOW). All the rest have come down in other configurations that would require a fifth wave to the top (in 5 waves). However, the current wave up from November 11 is in 3 waves, so going by EW rules, a new high is highly unlikely.

GDOW also does not support the new high scenario (chart at the bottom of the post).

The strongest cycle turn date of the entire month is Tuesday, March 22. That fits the current scenario. There’s a penumbral lunar eclipse on March 23 (Wednesday). “Penumbral” means the moon will completely disappear as the Earth completely blocks the Sun’s light.

Here’s a video overview of the market for Monday, March 21:

This weekend we’re dangerously close to a top of a second wave. 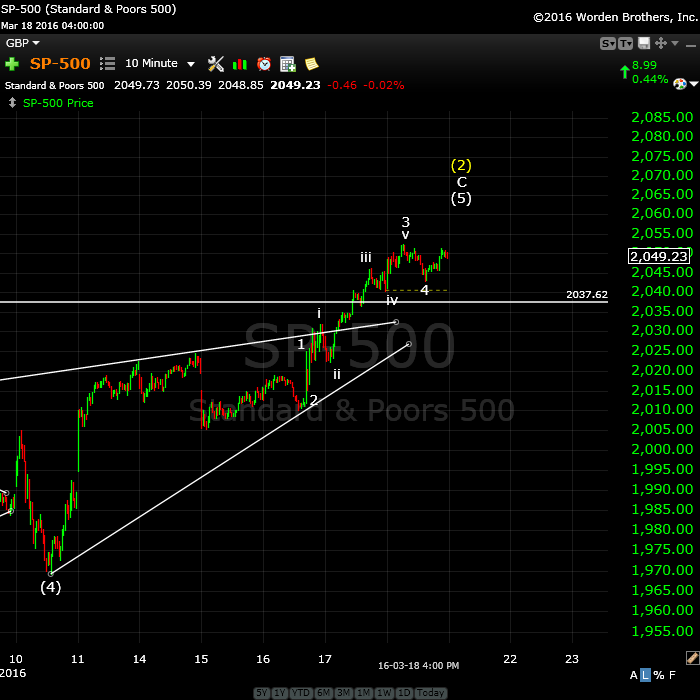 I know this is making us all crazy, but we’re really, really close. Above is a 10 minute chart of SPX. Looking closer at this final wave up, it appears to be not quite complete. The wave down on Friday looked motive but turned around and headed back up, so it must have had a problem (it was not long enough, for one thing). You find that as we get closer and closer to a top, the waves down (4th waves) start to look more and more motive. When you get into one minute charts, they’re extremely hard to analyze.

The waves are getting smaller and smaller. They cannot get larger than the EW count allows, so the maximum this final wave up can be is 1.618 X the first wave and that comes to 2064 SPX. I’ll post targets for the bottom of the third wave once we’ve seen a top. 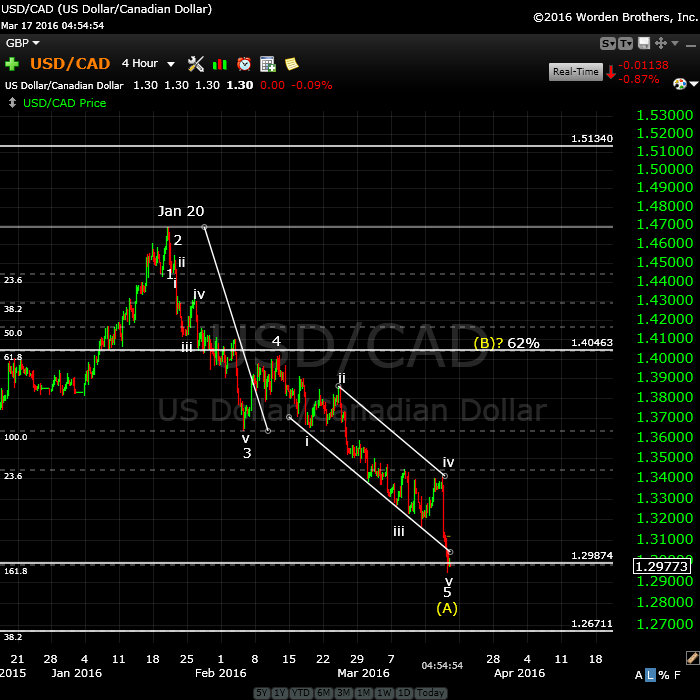 Above is a 4 hour chart of USDCAD. I have been watching this first wave down unfold and it’s met the target. The wave measures and numbers as a first wave (and A wave in this instance). It has retraced right to the area of the previous fourth. It should now correct to the 62% level in a wave B. 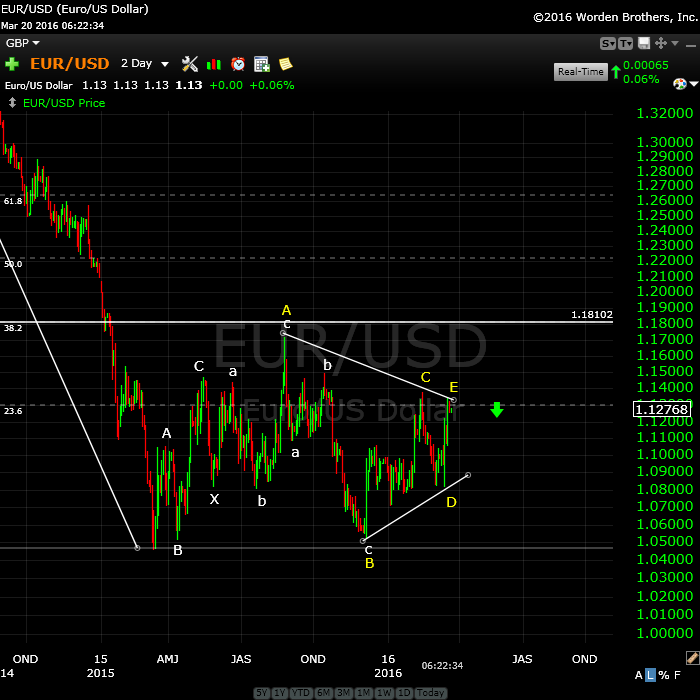 Update (Sunday):  Here’s the daily chart of EURUSD showing the waves up over the past few days that suddenly turned corrective. I was expecting the motive waves to continue, but this flashes a warning.

After watching the video I posted, Joe (regular comments contributor) pointed out that my first take on this (wave 2, with three down to follow) looks more like a triangle. He’s right—something I should have caught but didn’t. So thanks to Joe, I’m bearish the euro. It should head straight down from here.

But a word of caution: A fourth wave triangle forecasts a final wave is left to go. While it may be long, there should be a reversal at the end of it.

The dollar should do the same thing but in the opposite direction (up). 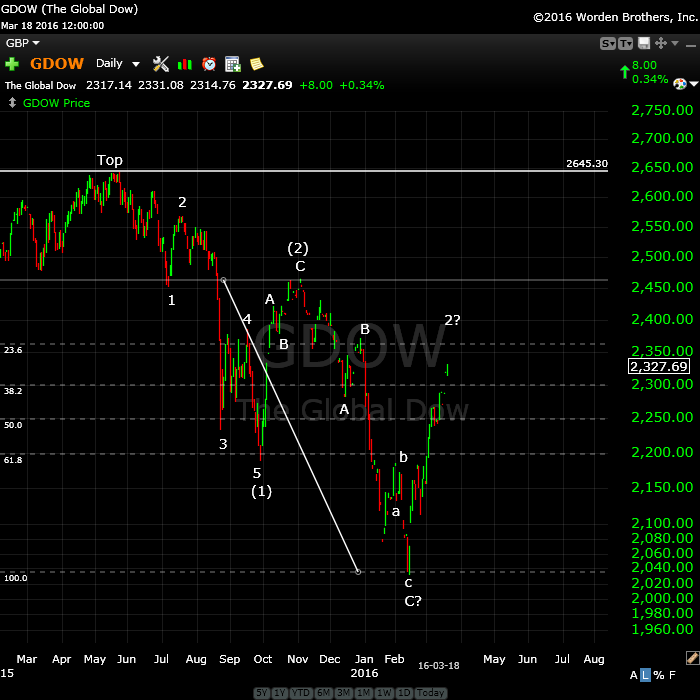