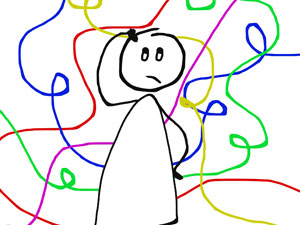 Controlled Chaos at the Top

We’re on the cusp of a trend change. The US Dollar Index looks like it has changed trend (but needs confirmation); however, the EURUSD wave pattern is questionable. None of the other USD currency pairs have turned the corner to create a new trend, but they’re not far away from doing so.

The US indices, of course, have not changed direction; the direction is still up, but not for much longer.

It will be important what the US Dollar Index does in terms of its retrace. A 62% retrace only (and a subsequent turn up) will confirm a bottom is in place and should trigger a large drop in the US indices (and similar moves in currency pairs). Until that happens, we’re in limbo.

There’s a full moon on Tuesday, Nov. 12 and this may be a determinant of a trend change. The market tends to rise into a full moon.

Tops are a process, and never more so than in this market, where everything has to change trend virtually together to allow the market to build some momentum in the other direction.

It’s important to note that several possible ending diagonals in the US indices have failed, and combined with the elevated sentiment index, the next move down should be the major one we’ve been expecting for SO LONG (frustrating, for sure).

The greed factor is at an extreme as of this weekend (even more extreme than last week!), so it’s certainly telegraphing a trend change is imminent. 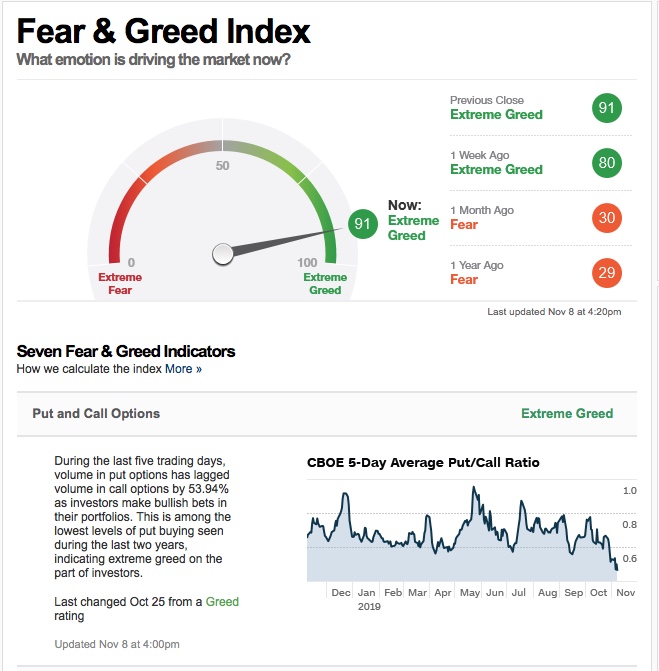 During the last five trading days, volume in put options has lagged volume in call options by 53.94% as investors make bullish bets in their portfolios. This is among the lowest levels of put buying seen during the last two years, indicating extreme greed on the part of investors.

Based upon the projection of a very large fourth wave drop in the SP500 to an area below 2100 suggests to me we’re going to see the demise of a European bank, perhaps Deutsche Bank. (there are other possible contenders out there, but this would be the biggest financially destructive potential catalyst).

This past week has seen a lot of churning and some turning (in the US Dollar Index, particularly). It will require a second wave to the downside to confirm the bottom is in).

At the same time, the US indices have been working on a final high, which I don't see for perhaps a couple of more days. Currency pairs still have a bit of work to do and I don't see an equities top until they finish up their current trends (they're very close).

All the major NYSE sub-indices (except the Russell 2000) have hit new highs, so I'm expecting the IWM target of 161 to be hit before the larger turn down.

The possible ending diagonal has been broken in NDX, the Russell 3000, OEX, and possibly, the SP500. I've left the ED trendlines on the above chart to show the possible pattern, but since it's broken in other indices, it will affect the outcome in ES, as well.

That means we're poised for a large wave down to below 2100 in ES. We need the final waves in other asset classes to finish up their current patterns before the entire market (and other international exhanges) change trend. I expect that event is only day away.

Tuesday of this week gives us a full moon, which could be the trigger.

The pattern across the indices appears to be an expanded flat (a regular flat in the NYSE exchange). That projects a large wave down in 5 waves to an area under 2100 in ES.

Summary: The current B wave up is most probably the B wave of an expanded flat. The A wave ended on Jan. 26, 2018. The B wave up will end in a set of corrective subwaves.

The larger degree pattern appears to be a flat (3-3-5 wave structures), which predicts a five wave dramatic drop to a new low below the A wave bottom (at about 2300). The larger pattern in ES is a record-breaking expanded flat, which will end the trend.