The End of Hopium? 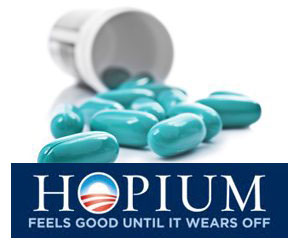 We’re on the cusp of a trend change across multiple asset classes on an international scale.

“Hopium” is a euphemism for the unsupported bullishness we’re seeing both in the market and in the main stream media. It’s not supported by the underlying fundamentals.

In fact, if you want a snapshot of the current social mood, look no further than Baltimore, which is highlighted in a zerohedge article this weekend, “Baltimore City Hits 300 Homicides.”

We have riots and revolutions erupting all over the world. This is the tip of the iceberg. The market is about to destroy trillions of dollars of value over the next three months. It’s going to be a game-changer.

The US Dollar Index appears to have changed trend and is possibly in the middle of an extended first wave to the upside. However, it needs a new high to technically confirm the bottom is in place.

This will further the recent liquidity issue that central banks have been fighting (as in the Federal Reserve and its announcement of “NOT QE”). A larger deflationary monetary crisis has been simmering “under the hood” for years. On a longer-term basis, it will lead to a credit and banking crisis throughout the world. We’ve already seen the topping of the real estate bubble, which is in itself, a sign of deflation taking hold.

The EURUSD wave pattern is in a similar position to the US Dollar Index (in the opposite direction), but the wave structure is not as clear. The most recent wave up as of Friday is corrective, so more downside is expected in the short term.

DAX, the German exhange, also appears to have topped and is this weekend in a corrective second wave on a one minute chart. This is the beginning of a 5,000+ point drop.

None of the other USD currency pairs have clear enough patterns to be certain as to whether they’ve changed trend, or not, but they’re all close to reversals.

Oil may have a little bit more to its rally, but the upside is very limited.

So, What Could Break?

Usually, at a major high such as the one setting up here, we have a complementary catastophe of some sort. It could be a financial collapse, or some other major event that would cause a loss of confidence. This doesn’t cause the expected thousand plus drop in SPX, but is a byproduct of the fact that all the money possible is “in” the market and people are feeling bullish because of that fact … and … financial ratios are pushed to the absolute extremes, which is certainly what Elliott Wave is telling us this weekend.

In the United States, we’re expecting the handing down of indictments from the Attorney General William Barr in the case of conspiracy to remove a sitting president from office. I don’t know if this event has the financial implications to help move the market but I think there’s a reasonable chance that it could. In any case, there will be two major opposing social forces at work, on opposite ends of the aisle, with a lot at stake.

There are revolutions cropping up all over the world, with a potential crackdown (illegally, mind you) of the Chinese government at the request of Hong Kong. At this point, it’s just a rumour.

There are also a few international banks that are on the verge of collapse in Italy, Spain, and Germany and this could also prove to be a catalyst for a trend change. Usually at these major inflection points, there is something that “triggers the turn,” even though the turn is inevitable without it.

For example, very often at expected currency turns, there is an rate change announcement that creates a spike in the opposite direction than the established trend, and ends up being the catalyst for a turn with momentum.

It’s going to be an exciting week, I have no doubt.

Time To Screw on Your Contrarian Hats

The greed factor is at an extreme as of this weekend. We’ve been hovering around the 90% level for the past week or so.  It’s telegraphing a trend change is imminent. 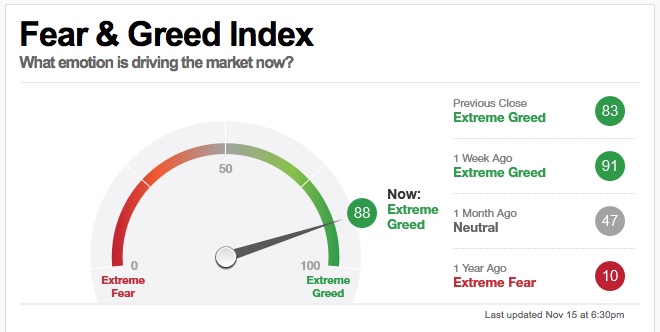 During the last five trading days, volume in put options has lagged volume in call options by 47.53% as investors make bullish bets in their portfolios. This is among the lowest levels of put buying seen during the last two years, indicating extreme greed on the part of investors.

The VIX is very close to new lows, setting up a gigantic short squeeze opportunity.

This past week has seen a lot of churning and some turning (in the US Dollar Index, particularly). DXY looks like it's in the middle of an extended first wave to the upside but will need confirmation with an immediate turn higher.

We continue to wait for the US indices to find a final high. On an hourly chart, NQ (Nasdaq futures) has traced out an ending diagonal and has almost reached the maximum level allowable.

ES (on an hourly chart) first began with a contracting triangle, then morphed into an ending diagonal, and then morphed once more into a very rare ending expanding diagonal (a pattern that I've only seen one or two times before). On Friday late in the day, it tested the upper trendline.

Both of these patterns are trend ending patterns and we are at the very top of both.

The SP500 is more difficult to pinpoint due to all the gaps in the set of waves up from 2872. Fibonacci relationships also do not seem to be working. The most recent wave up in both ES and the SP500 may need a small fourth and fifth wave to finish off the final wave — it's very hard to tell.

In any event, we're at a top and at this point, hours away from seeing a turn to the downside, I believe. However, we may need some sort of "trigger" event to mark the turn. I'm expecting a resolution in the first part of this week and a set of waves down that are dramatic in terms of momentum.

The possible large ending diagonal (trendlines have been left on the chart above) has been broken in NDX, the Russell 3000, OEX, and the SP500. As a result, I'm expecting this wave down to result in the targeting of the 2100 area and below.

We need the final waves in other asset classes to finish up their current patterns before the entire market (and other international exhanges) change trend. I expect the trend change is imminent (particularly with the current position of the US Dollar Index.