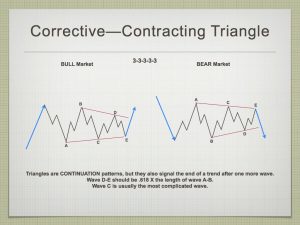 Contracting triangles are the most common type of triangle. When they’re in the fourth wave position, they predict an end to the entire trend with one more wave (fifth wave).

Guidelines (guidelines can be broken but it’s rare that they are): 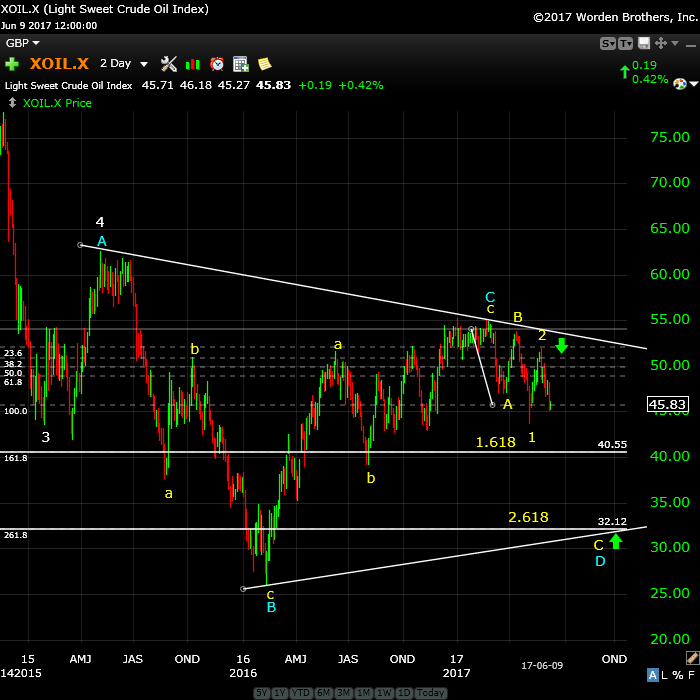 Above is a two day chart of West Texas Intermediate Oil. I called this pattern as a triangle way back in early 2016. It continues to play out as such and has a long way to go. We’re currently in a wave headed down to the $32 area. Once that target is met, we’ll see one final wave up to slightly above $50 before we slide down below $25.

From a fundamentals perspective, there is no demand for oil and at the same time, the international market is flooded with oil. There are lots of “fun and games” going on to prop it up, but we’re far enough into this depression that there won’t be a resolution to the upside for a very long time.

In the shorter term, we’ve completed a yellow A wave down, a B wave up, and are now headed down to the target of about $32, which is also a C wave fibonacci length of 2.618 X the yellow A wave.

EW analysis allowed me to call the top of the blue C wave, and targets for blue waves C and E.

It became apparent in late 2015 that we were forming a triangle. That’s because the wave down from early 2015 was obviously in three waves. Once we reached the bottom of blue B and then risen above the previous wave yellow b low, it was obvious the previous wave was a three and was going to remain so.

The only patterns that start with a wave containing only 3 subwaves in a fourth wave position are triangles and flats. However, the first wave of a flat would not be as extreme as that of a triangle, so it’s easily discounted in this case.

Above is the daily chart of ES (click to enlarge, as with any of my charts). The count has not changed appreciably. What appears to be a third zigzag of the third wave (you can only have three patterns within a corrective wave—this third pattern starts at blue X on the chart) continued slightly higher as predicted last week and continued to build a potential very large expanded flat at the top of the circle red third wave. The very top of this last wave formed what looks like an ending diagonal, and we dropped in dramatic fashion on Friday.

Five waves down to a previous fourth of one lesser degree confirms a change in trend. We don't quite have that yet. The Nasdaq, which should lead the market is further along in the trend change process, but also does not have five waves down confirmed.

Summary: We've completed the third wave in ES at the top of a possible expanded flat (and and ending diagonal). We could have one more test of the top on the NYSE side of the market. I believe the Nasdaq side of the US market has likely seen the top; however, we still need technical confirmation.