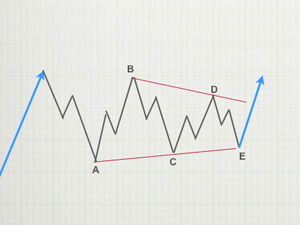 A Pending Top is Waves Away

We’re now into the relatively small moves of a final topping process. The US indices have continued to be difficult to predict with any certainty, although it’s been obvious a triangle pattern of some sort is in the works.

I’ve warned that I’ve been early in predicting the ending diagonal, but even so, there were only two options left — a triangle of some sort, or diagonal.

Mid-week, it became clear that even though SPY had reached a new high (suggesting the ending diagonal was in play), the major US sub-indices had failed to do so. On Wednesday, (after a few days of uncertainty) a larger drop became more probable, and Wednesday night,  predicted a final drop after a “terminal” fourth wave barrier triangle set up overnight. The ending diagonal had failed.

As a result, we’re now in the confirmation stage of a fourth wave contracting triangle. These patterns aren’t typically confirmed until the D leg is in place; however, we’re out of other options. I suspect we’ll have that wave in place by the end of the next week (Sunday, October 13th is a full moon and might be the turning point for the top of the D leg).

In any event, the waves are small enough now that we can consider this market a day trader’s market. I’d caution against staying long overnight in rallies; however, turn downs are more likely to be safer overnight. Any surprises are likely to be to the downside (as there’s an underlying weakness in the US indices).

Virtually all asset classes and their components are in their final wave patterns. It’s only USDCAD that needs to turn in currency pairs … and we may be waiting for a final bottom in oil (and also in the Russell 2000). As I’ve been saying for over three years now, all major asset classes will get more closely aligned and eventually move as one as they work themselves to a final top.

About mid-week this week, it became obvious that the pattern we've been following was morphing from an ending diagonal to a contracting triangle. That isn't a big change, but on hourly charts, for trading, it changes expectations for entries and exits.

It also prolongs the up and down action, providing in effect, two additional up and down legs. I put us currently in the D leg rally of this triangle, looking forward to an E leg down to follow, and then a final fifth wave up to a new high to end the pattern and the entire corrective rally up from December 26, 2018.

The differences between an ending diagonal and a fourth wave triangle could be considered subtle, but are important for trading:

This weekend, the 14 day RSI indicator continues to deteriorate, as it should for the final pattern.

After the fifth wave up to new all time high is complete. ES will head down to a new low below 2100.