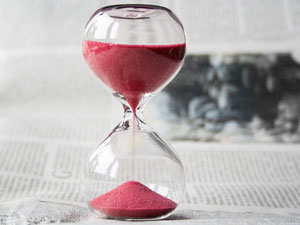 Time is marching on, and so is the market, but we still have a top to get in place. It’s a tedious topping process, but nothing much has changed this week. The turn up on Friday afternoon should take us to a new high.

I cringe these days at the hysteria of the herd (and main stream media, who are fueling the fire) with the marches and strikes and emotional tyrades. So much ignorance!

But, that’s typical of major cycle tops, and we’re certainly at one. In fact, with US indices, we’re at the top of the strongest wave, the third wave, and I expect that the current level of mania may be nearing a climax. That’s because the eventual fifth wave (projected for the end of 2020) is not as strong and, in terms of the stock market, that’s because not as many stocks participate in the final march to the top. That may say something about the level of emotion that will be exhibited by the climate “cult.” It may start to subside. 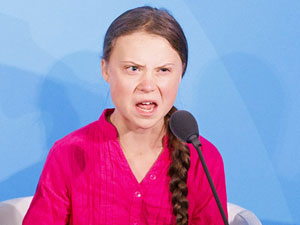 Meanwhile, we have a 16 year-old girl with aspergers syndrome leading the charge! What she could possible know about the history or science of climate is certainly beyond the scope of my imagination.

In any event, it should be obvious now that the mood of the herd is turning quite negative. As I said, we’re nearing a major market top and that’s to be expected. The warm-wet phase of the 500 year cycle is coming to an end and we’re transitioning into the cold-dry phase. This is the reason for the extreme weather we’ve been experiencing over the past decade. I’ve just published an article that provides an “Introduction to Climate Cycles.”

Dr. Wheeler and “The Big Book”

Here’s how Dr. Wheeler, who headed up the largest climate study in history, summed it up:

“As the warm-wet phaze terminates, climate becomes drier and hotter. As it does, other phenomena manifest themselves: creativity declines; reaction and decadence set in; governments become despotic; minorities are persecuted; general health declines along with the birthrate; economic systems collapse; socialistic and communistic regimes rise under an epidemic of dictators; individual freedoms vanish; and the moral tone of society reaches a low level. Toward the end of this comes another series of wars we call nation-falling wars, because many of the governments initiating them during this period are either tottering or about to collapse internally. These particularly savage conflicts occur on a falling temperature and a rising rainfall curve.” — Dr. Raymond H. Wheeler, Ph.d, Climate — The Key to Understanding Business Cycles.

The nation-falling wars are typically just skirmishes; the trend is starting to turn towards civil wars and we’re starting to see the civil unrest take hold in countries around the world.

As I mentioned, this third wave top that we’re currently experiencing is the strongest of the waves. Therefore, it tends to persist for what seems forever. However, when it reaches the top (very soon), we’ll start to see dramatic market drops, culminating in at least a 1,000 point drop in the SP500 (the fourth wave we’re expecting). We’re getting very close and the herd is becoming more and more emotional and aggressive, as they always have throughout history at similar cycle tops.

Friday marked the eleventh day of weakness, with continued failed attempts to mount a final rally to a new high. Near the end of the day, we'd reached the 38% retrace level of the zigzags up from 2812. This level is a typical level for a fourth wave bounce and late in the day, we got one. The direction now should be up to a new high in a final of three zigzags.

Third waves of ending diagonals have a habit of hanging around near the top before finally topping and dropping into a large, fourth wave. That said, this particular third wave topping procedure is more frustrating than usual. It's a weak market, with extremely low volume, and news tends to have a greater than normal affect on it.

Last weekend, RSI was showing good support for a continuing rally. This weekend, it's not, and in fact, I'd expect RSI divergence to continue during what I expect will be a final zigzag to a new high. RSI divergence typically accompanies final, fifth waves.

I put us near the top of the third wave of an ending diagonal. We need to get to a new high before turning back down in the fourth wave, which I expect to descend about 200 points to the lower trendline.

The slope of the lower trendline is determined by the bottom of the fourth wave. There's a restriction here, as well, in that the upper and lower trendlines cannot diverge. They usually get close to being parallel, but if they diverge, then the ending diagonal breaks and I would expect us to descend further in that case.

After the fourth wave is complete, there is one more wave up to a new high to complete the ending diagonal.

Summary: The most probable pattern tracing out at the top of this large corrective wave up from Jan. 26 is an ending diagonal. if so, after 5 mostly sideways waves, it will culminate in a minimal new high, setting up for a devastating drop.