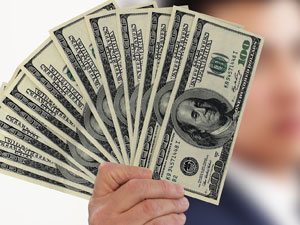 Dollar at the Center

This weekend, we’ve reached the top of the D leg of the contracting fourth wave triangle in the SP500. Expect the E leg down next, followed by a final fifth wave up out of the triangle to a new all time high.

The larger pattern is an expanded flat, so following the top, we’ll drop down into the C leg of the expanded flat pattern, a large drop to a low well below the December 26, 2018 low.

Almost all asset classes are moving to a major inflection point together, as I’ve been explaining for the past few years. It all centres around the reserve currency, the US Dollar. 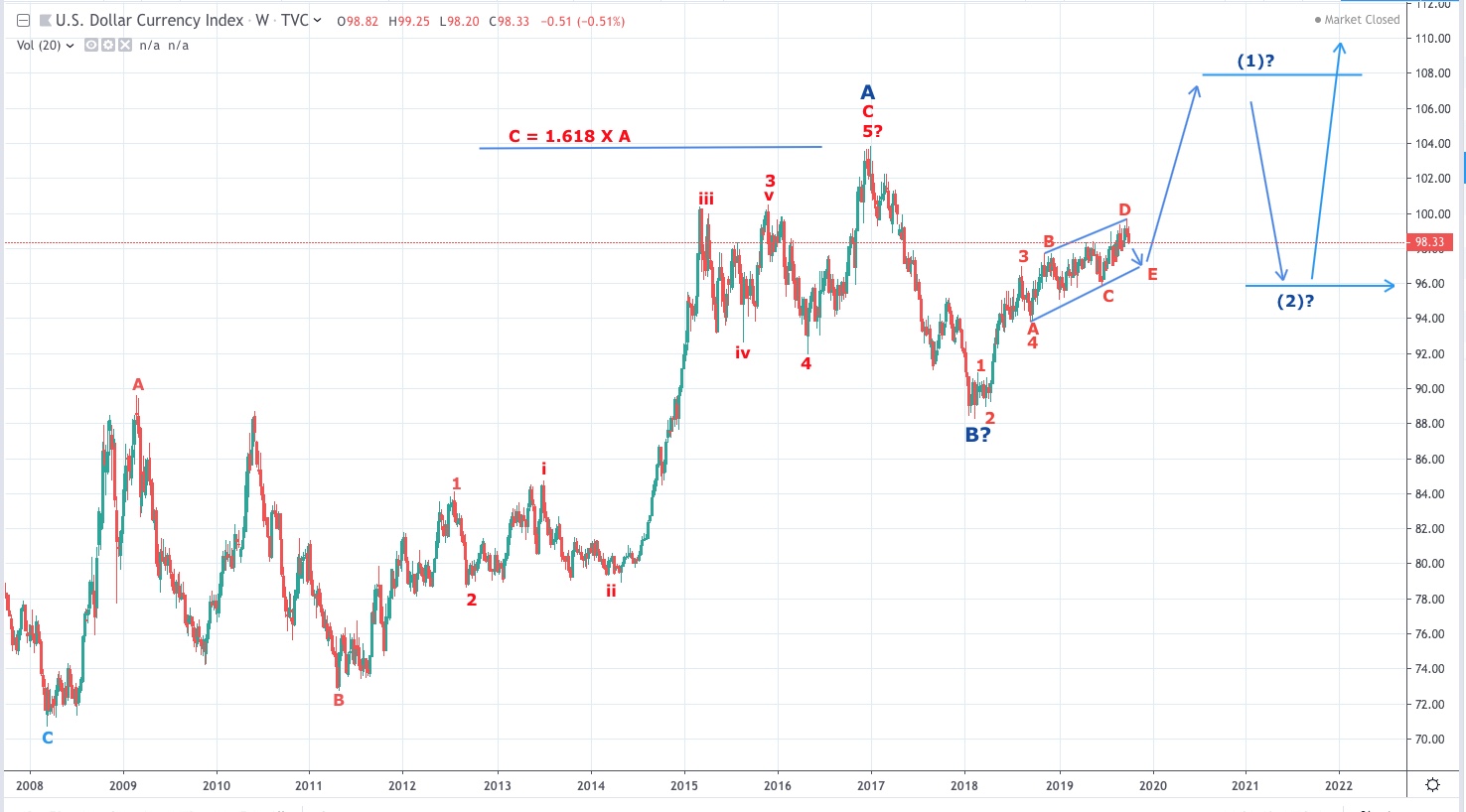 Above is the weekly chart of the US Dollar Index. This entire pattern is corrective to the upside. I’m showing a large A wave up to begin the pattern (to 90.00), then a set of corrective waves back down. After a turn up, we have a five wave pattern, but I don’t consider this pattern to be motive (there are overlapping waves along the way). So, my preference is that we have a possible zigzag playing out the upside.

At the present time, we’re rallying in what may be the first wave of a second set of five waves to the uspside. If that’s the case, I’d expect a fifth wave up to perhaps a new high, followed by a second wave down that would retrace about 62% of the first wave up (dropping to somewhere around 96.00). After a turn we’d see a third wave to the upside.

I would expect (from where we sit now) to see the fifth wave in the US indices (projected to top in 2021) to coincide with the second wave drop in the US Dollar Index. This is somewhat speculative at this time, but this is where the technicals seem to be pointing.

The projection will very much depend on where the first wave (1) ends its fifth wave. The dollar moving up in value is deflationary. 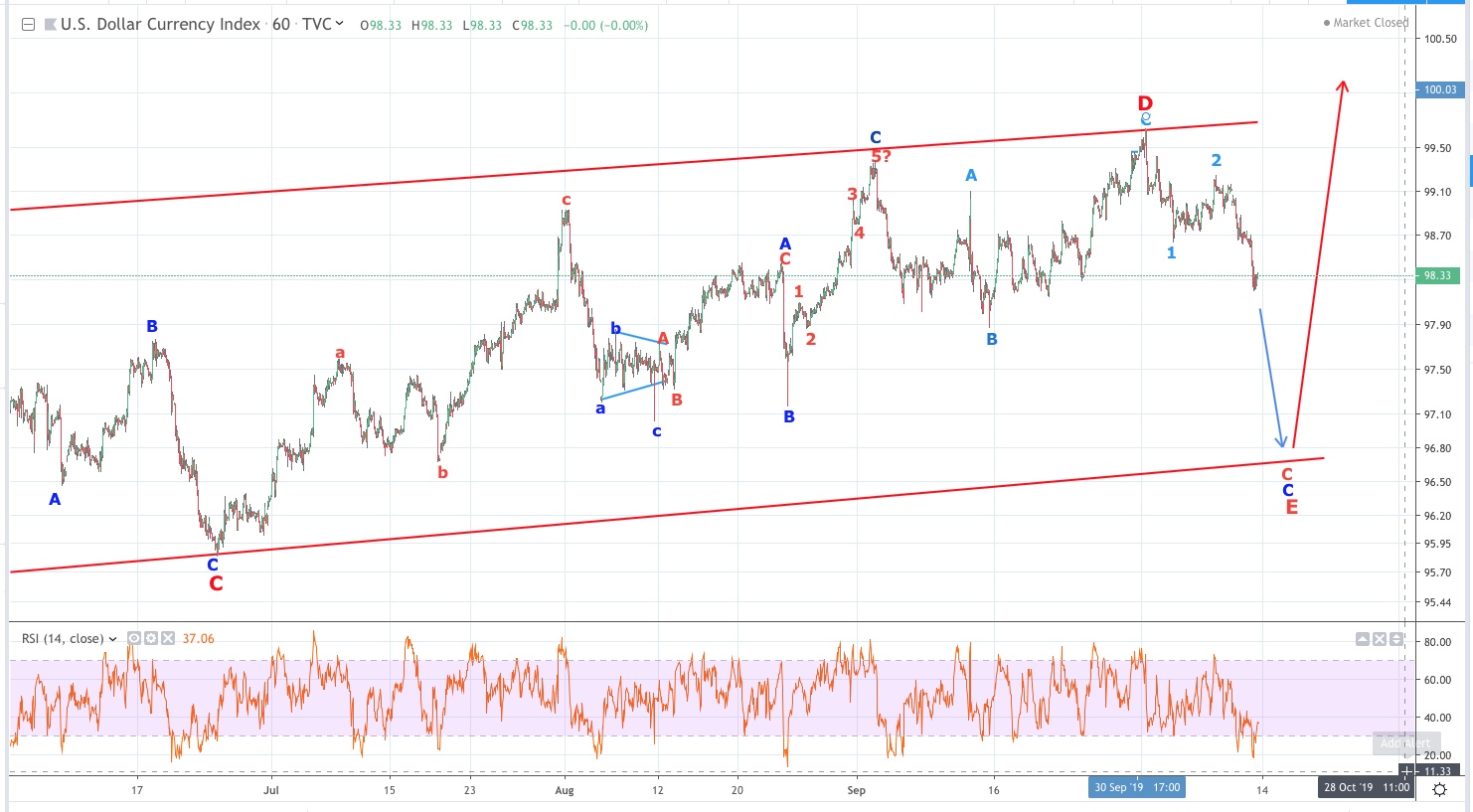 Above is the hourly chart of the US Dollar Index.

The first part of this past week had the US dollar experiencing liquidity problems. The Fed has now stepped in to alleviate the situation and is now pledging another round of QE, but not calling it “QE.”

In any case, the Fed injected more debt into the banking system and seems to have unblocked the dollar, sending it lower, as required by the technical pattern. Our target for the time-being is the lower trendline (the E apex). That should coincide with the top fo the fifth wave in the US indices (after the completion of the current contracting triangle).

The larger pattern is a fourth wave running triangle. Once we reach the lower trendline, expect a turn to the upside and set of five waves to a new high well past the upper trendline. The action expected from the US Dollar index is deflationary for the reserve currency.

This past week ticked along as prescribed. We've now traced out the D leg of a contracting triangle across all the major US indices, except the Russel 2000. The Russell didn't do anything unexpected, however: They will all have to find new highs before we see the predicted large, fourth wave down, (which will drop over a thousand points in SPX).

In the indices that are tracing out triangles, we're left with the E leg down in three waves and then a final 5th wave to an all-time-high. The E leg should begin its descent early in the coming week, Once complete on the downside (the target is the lower trendline of the triangle), we'll have only one final wave up left to to go to end the pattern and the entire corrective rally up from December 26, 2018.

Fourth wave triangles signal that there is one more operative wave (the fifth wave) before a trend change. After the fifth wave up to new all time high is complete, ES will head down to a new low below 2100.