On Its Last Two Legs 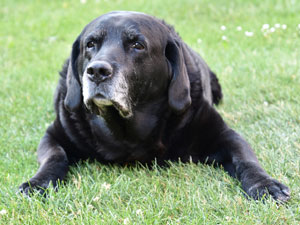 There are two legs left to this rally from December 26, 2018 across all the major US indices.

The down leg looks to have started on Friday and with the pulling of the Brexit vote on Saturday, we will likely see more downward movement. (the pound has already reacted negatively). This is the E leg of the contracting triangle, the final wave that completes it.

I told a UK trading buddy of mine on Friday night that, the state of the market at the close on Friday at the close predicted that the Brexit vote wouldn’t go well, because we’re expected a large drop. That was the case; the actual vote got pulled. Expect lower prices on the Sunday open.

The up leg will follow this one and be in five waves to a new high across all the indices. That wave will complete the almost year-long corrective rally (and non-confirmation) across the US major indices (ie – the DOW. SP500, Russell 3000, with the NYSE — the mother exchange).

The market is tired just like my doggy in the picture above. In fact, it’s exhausted. Gaps are routinely being left open and virtually everything is moving to the beat of the US Dollar.

You can also see revolutions starting to break out in countries around the world (Spain, France, Hong Kong, Chile, Ecuador, Haiti, Papua New Guinea, and others). This is not an anomaly; they will continue to crop up and get bigger as time goes on.

Then there are the loss of jobs, bankruptcies, and union strikes that are growing through out the world. The action of governments to these crises usually exacerbates the problem (as in the jailing of politicians from Catalonia for 13 years, or the restricting of imports of black outerwear in Hong Kong by the Chinese government so protesters can’t dress in black — this one is particularly stupid).

Add to that the corruption that continues to be exposed and you have a recipe for a major upheaval. When this market comes down, it will be fuel for the fires that are starting all over the world.

This past week was mostly sideways action across multiple asset classes.

In ES, we're now in the E leg of a contracting triangle (likewise across all the major US indices, except the Russel 2000 (IWM), which has a slightly different pattern, but still needs a new high).

Sideways action: The movement of the US Dollar dictates the direction and speed of movement of the US indices (and almost all the other asset classes) and it's been in a running triangle for many months. Now, the US indices are at a major top and also in a triangle (a contracting triangle). These triangle restrict movement. The influence of being at a major top also means upside access is extremely limited. It's safer on the short side than long.

Volatility: On the other hand, volume at the top is extremely low which can result in larger moves on news. One other element that's affecting the movement of the market is dollar liquidity. It was a problem last week and sent to the US Dollar index to new highs. This week, with the introduction of QE4, it's moving the dollar in the opposite direction and it now appears to be at an extreme. This weekend seems to be an inflection point, and we may see this logjam broken apart by the Brexit vote, slated for Satursday.

In summary, movement is constricted by triangles while, at the same time, within those triangles, we can experience volatility, which I expect this weekend in particular.

With the Brexit shenanigans going on in the United Kingdom, and the pulling of the Saturday vote, GBPUSD has dropped strongly. I expect a similar reaction in varying degree across the rest of the market. I expect volatility to continue until we top, keeping in mind the movement restrictions of the larger triange patterns.

We also have potential market-moving events at the end of October, which may prove to be our top.

Expectations short-term are that the US Dollar Index will turn to the upside, which will allow the eminis (ES.NQ) to complete the E leg of the triangle we're in — to continue a drop lower in three waves. This is the final E leg of a contracting triangle.

After that downward leg is complete, look for a final wave in the US indices (in five subwaves) to an all time new high, which will result in a trend reversal and start a mini-crash to new lows below the December 26, 2018 low.