Revolution in the Land of Myopia

The Slow Shuffle Towards Civil War 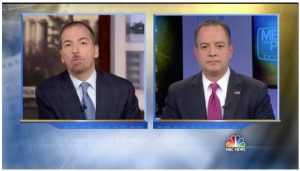 Usually on a Sunday morning, I tune in to “Meet the Press,” one of the longest running NBC television programs ever, focused primarily on panel discussion and interviews related to US politics. They used to touch on international affairs, but less so in the past few years, unfortunately. Recently, it’s been guilty of endless Trump-bashing, from a very one-sided perspective.

I’ve come to the conclusion that there really is no investigative reporting any more.

Chuck Todd, the host, takes the US government position (or democratic party view) to a fault more and more often. There’s very little objective weighing of differing views and almost no attempt to question anything put out by the liberal print media in sometimes superficial “reports,” based on skeptical sources. It didn’t use to be that way.

There’s a story this weekend in the New York Times that describes and seems to support an unsubstantiated “report” that Russia was out to swing the US election in Trump’s direction. The article is based on the fact (which isn’t a fact at all) that the Republican National Committee was hacked by Russia (which is not true, according to either the FBI or Reince Priebus, the RNC Chairman). And Senate Majority Leader Mitch McConnell doesn’t buy it, either.

The conclusion that they draw is that because Russia supposedly hacked both the democratic and republican committees, and only the emails from the democrats came out through Wikileaks, that Russia attempted to undermine the US election.

The report is not based on hard evidence, simply on conjecture. It’s not supported by all of the US intelligence agencies.

To me this is another sign that the United States is heading for civil war. This is what happens in downturns after a 500 year cycle top. In this case, there seems to be an ongoing attempt to split the nation in two politically. The media is playing with fire.

People are simply taking sides, based solely on opinion and there’s a kind of myopia in terms of the larger picture—the  corruption that is everywhere so obvious, in and out of government. The position that Russia undermined the US election is simply not credible at this point. It’s propaganda, as far as I can make out.

And yet, the host of Meet the Press spent a good chunk of time hammering away at Reince Priebus, based on a premise which Reince Priebus categorically denied again and again, with backup from a month of FBI investigations. The war of words and mounting of fake news stories intensifies. Meanwhile, Rome burns.

There’s even talk of another election. 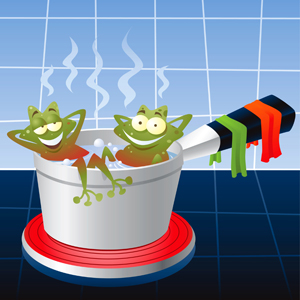 There’s an old wives tale that involves frogs in boiling water and is a metaphor for human nature.

First, put a frog in a pot of cold water, and then place that pot on a stove top. Now turn on the burner and very slowly increase the heat. The legend has it that the frog will not notice the ever-increasing temperature and will not jump out of the pot. It is, of course, not true. And it’s not true of humans either, in the same situation.

However, humans are tremendously adaptive—it’s a trait that has allowed us to prosper even in the most difficult of times. But it can be detrimental to our well-being, as well, because we often don’t recognize deteriorating conditions until it’s too late to do anything about them.

I continually refer to the “herd”—the bulk of society that is blissfully unaware that there are any problems with the financial system, that society has become generally very angry, and that our standard of living has dropped to a level at which despair is starting to overtake what once was the middle class. The food lines are growing, people are losing their jobs, many have lost their homes, and it’s getting worse and worse. The elite are growing are growing richer and more distant financially from the rest of the population—this is a typical major societal revolution that’s similar to ones of the past, most obviously, the French Revolution.

There are many who just don’t see the bigger picture. They’re either hoping for a turnaround in the near future (thanks to governments telling us conditions are much better now than in the past), or they’re losing their self esteem because they think their reduced lot in life is their fault (this is the true tragedy, in my opinion). Lives will be ruined and many will never recover psychologically.

Cycles give us the bigger picture and a warning of the bleak times just around the corner.

When the crash comes, there will still be many that will “buy the dips” either financially, or psychologically … all the way to the bottom. It has always happened that way.

If we could get the world to accept that major natural cycles change the course of history, perhaps we could prepare for the bad times by not going completely hog-wild in the good times. Perhaps I’m being way too naive?

A Christmas Present: This is the same “big picture analysis” for ES that I’m providing in my premium service.

There has been so much crazy speculation in the past 48 hours as to where this market is going, I thought it best to focus in on the “never ending diagonal” to reinforce the fact that it’s just an ending diagonal, we’ve seen it many times before (at least I have), and it always traces out much the same pattern, with a time projection that really isn’t going to change that much from the norm.

This particular ending diagonal is extremely rare. In fact, nobody to my knowledge has ever seen one at cycle degree or higher at the end of a corrective wave (at least, in a bull market).

Let’s get some of the emotion out of the equation and take a look at the pattern from a technical perspective to get a realistic look at where we’re going and when. Then you can tell me I’m crazy (I’m used to it … lol). 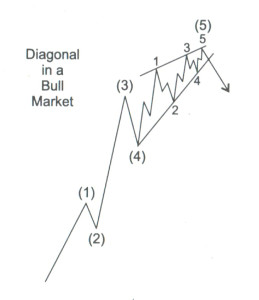 We continue to work our way through the ending diagonal.

Ending diagonals are rare at cycle degree. Wherever they trace out, they suggest a market that is extremely weak and barely able to achieve a new high. Although ending diagonals usually fall under the banner of a motive wave, they have properties more aligned with corrective waves. Ralph Elliott described an ending diagonal as occupying the fifth wave position of a motive wave when the preceding move has gone “too far too fast.” He maintained that it indicates “exhaustion of the larger movement.”

This particular version of an ending diagonal is extremely rare. That’s because it’s at the end of a corrective wave. And that, I believe, is primarily due to the fact that the rise from 2009 has a large central banker component—an “unnatural” element to it. It has fuelled the bullishness of the herd, but not in a sufficient way to effect a truly “motive” market. We’re barely making it to the top.

Last week, I posted a video relating to my original projection for a third wave with a maximum high of 2237. Once we exceeded that number, I immediately posted a video projecting higher levels due to the fact that I’d missed a tiny defining element of all ending diagonals: all waves must be zigzags.

However, in the chart below, you can see that from the red (4) to the red wave 1 of the ending diagonal, there are only three waves (blue ABC). In fact, the three waves are a zigzag and actually make up the whole of the first wave of the ending diagonal. That’s because the wave from blue B to red wave 1 is in five waves (it is NOT a zigzag; it’s just a “zag”). This gets down really deep into the intricacies of Elliott waves—and supports it as a science.

And that gives me a new mini-module for the course I’m working on that nobody else seems to be aware of!

Based on the ending diagonal we’re currently in (which is the pattern playing out in all the major US indices), I’m still projecting a final top to our five hundred year set of Supercycle waves at the end of the 2016 year or into early January. I’m leaning towards the end of December or first part of January (more likely). I’ll explain more about the timing below. 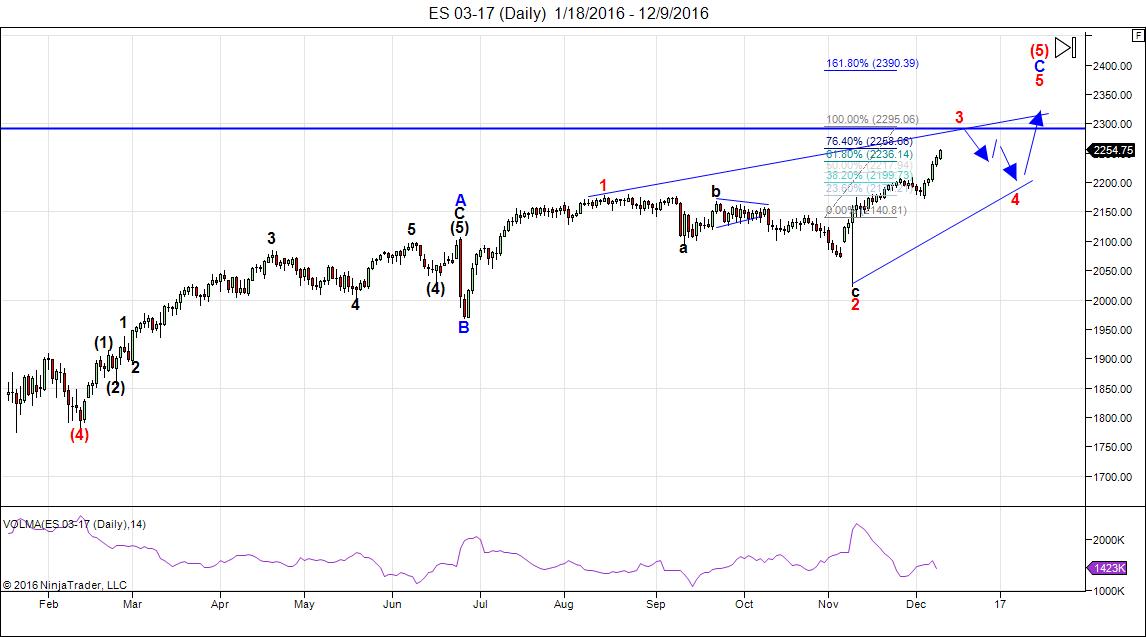 Note the extreme drop-off in volume for this wave (it’s the purple indicator line at the bottom of the chart). Volume is almost none existent. It should surge in the fourth wave down and we should get a volume surge during the first part of the fifth wave.

Here are the rules going forward:

If wave 3 in ES were to reach 2315, that would be a 20% extension of the fifth wave (C wave) that we’re currently tracing out. The first four-fifths of the third wave (from ~2024 to 2055 now) took about 3 weeks (if you discount the US thanksgiving holiday). Similar progress would suggest another week at most to the 2315 area. This may coincide with the Federal Reserve meeting announcement at the end of the day Wednesday, Dec. 14. If there is an interest rate rise, I would expect a sharp drop into wave 4 of the ending diagonal.

The higher wave 3 rises, the shorter it makes wave 4, simply by the fact that the trendlines must converge. You can look at the diagram at the top of this section to see how small wave 4 and 5 usually are compared to waves 1 through 3.

It may take longer to get to a top than my speculation but we’re not months and months away as per some of the projections I’ve heard. We’re much closer than that, more like weeks away.

As a comparison: Below is a chart of gold. look at the time factor in wave 4/5 compared to wave 3. 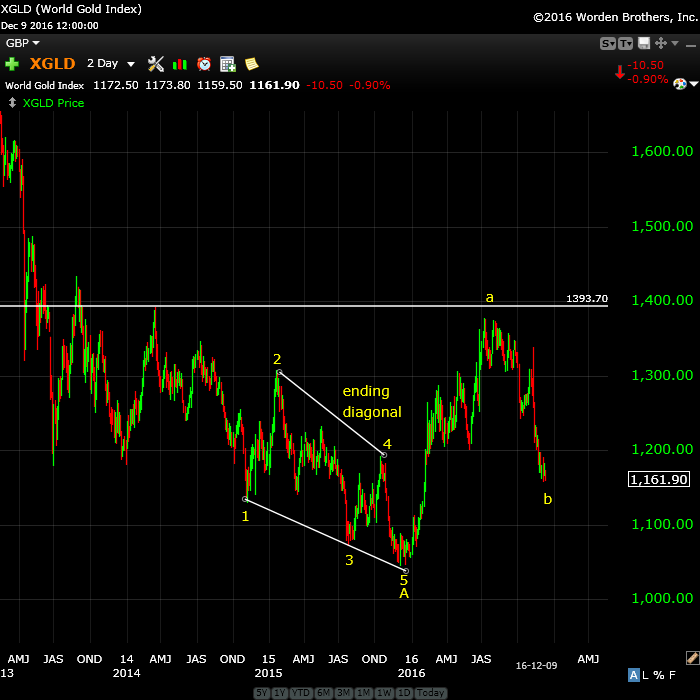 In the case of XGLD, the ending diagonal did not do a throw-over. In the present situation, I’d be very surprised if the opposite were not the case.

NOTE: There is no chart show on Dec. 15 as I’ll be travelling.