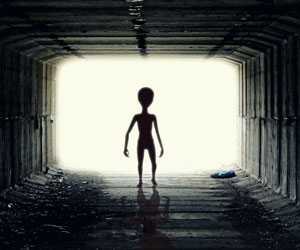 After a predictable week the week before, last week was the opposite: It was highly unpredictable!

This week in this free blog, I’m going to provide some insight into the kind of thinking I do at the hourly (and smaller) chart level for the Trader’s Gold subscription service. I seldom share this on the free blog.

Last weekend left us with a non-confirmation between cash and futures: The SP500 bottomed at 2822 while ES (e-mini futures) bottomed lower at slightly below 2780. That’s a 43+ point discrepancy and is unlikely to last. Related indices like this do not like to be out-of-sync and usually find a way to get back into sync.

I had expected that re-synchronization to happen this past week, but instead, all the US indices rallied, some of them tracing out different structures that were corrective, except for the DOW, which rose in five waves. However, in the afternoon of the Friday session, the DOW rallied to a new high, thereby making the wave structure corrective.

Until that happened, I’d been contemplating that we were in the third wave of an ending diagonal (which is supported by the fact that we’re currently likely in a fifth wave, since we’ve already traced out a fourth (or B) wave).

Ending diagonals require internal zigzag structures. However, the current rally in the DOW is now not a zigzag, so my prognosis has changed. Elliott Wave rest on a foundation of probability (decided the most probably outcome, based upon wave structure, combined with fibonacci relationships). The most probable outcome now is that we see a retest of the current low in ES, which would bring the SP500 and ES back into sync.

Once that happens, an ending diagonal is a probable outcome for the final pattern to the top. The waves down are corrective, so a new high is required.

As I said in this week’s Chart Show, this is the most dangerous market I’ve ever experienced; indices are being “pushed around” to extremes by the movement of the US dollar; fake-outs are the order of the day.

There are strange goings on right now. A high degree of CAUTION is warranted until be have a new confirmed pattern in place. 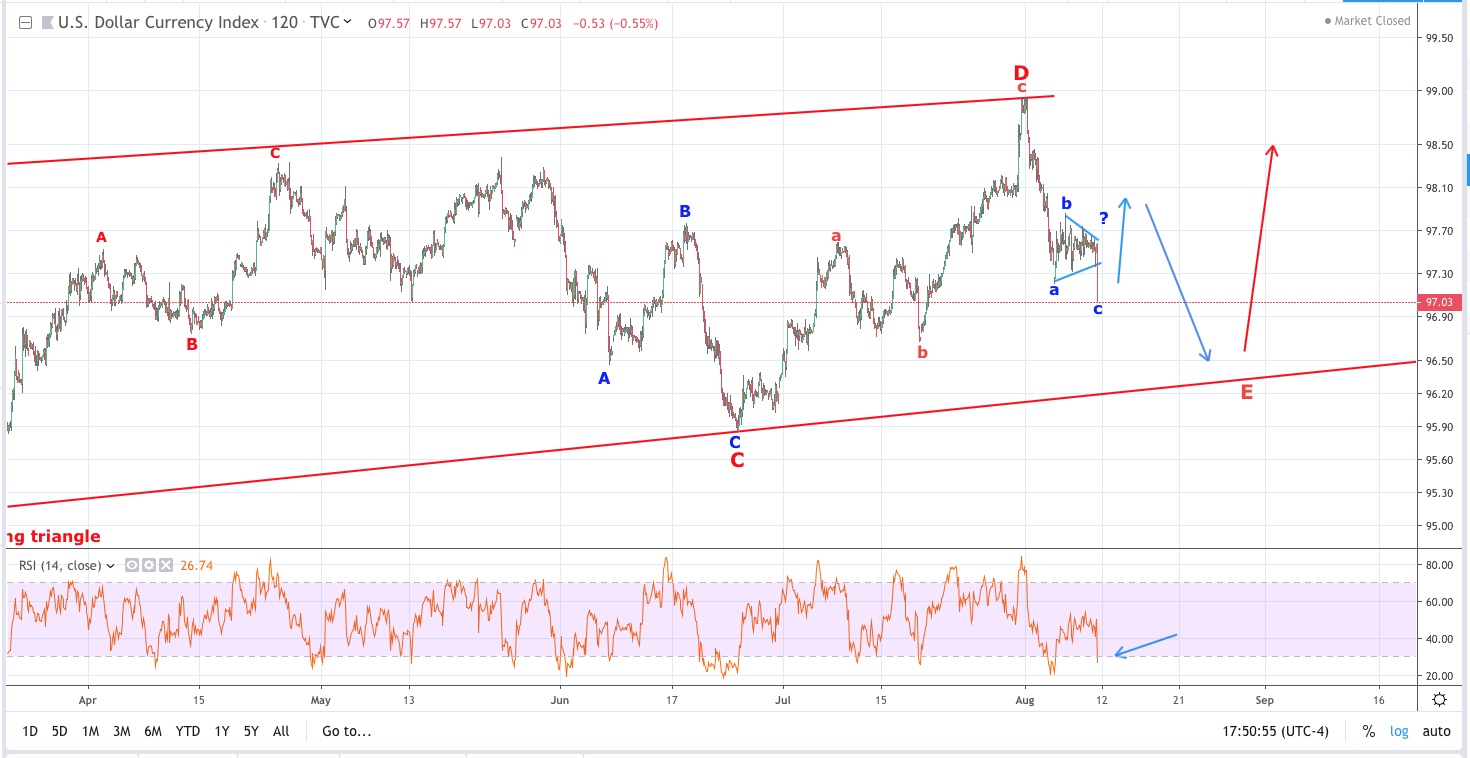 For the past several years, I’ve been writing about the importance of the US Dollar, as the reserve currency, to the international markets, which are all moving to a top at the same time.

The US Dollar Index is a basket of currencies, dominated by the US Dollar; it’s the one everyone watches.

The US Dollar is in an uptrend and the most major asset classes have been moving more or less with its ups and downs. When the dollar moves down, the US indices move up, for example. Shorter term, the index is currently in a running triangle (a fourth wave) and within that triangle, it’s in the midst of its final move to the downside. Once it hits the lower trendline, the US indices should top.

The dollar this past week has become as unpredictable as the US indices. It went sideways for four days, and late on Friday afternoon, it dropped to a new low. This structure is quite strange because it has not traced out an upwards correction of any great magnitude; it would be difficult to classify the structure as an ABC corrective wave, which is required within a running triangle. Therefore, I’m expecting a larger rally to an area above the currently labelled ‘b’ wave.

If that happens, it’s very likely the US indices will drop, perhaps to test the current lows, as I’m suggesting elsewhere. While not anywhere near conclusive, the action of the US dollar is suggesting to me that a rally to the upside (that was expected this week) is still to come. 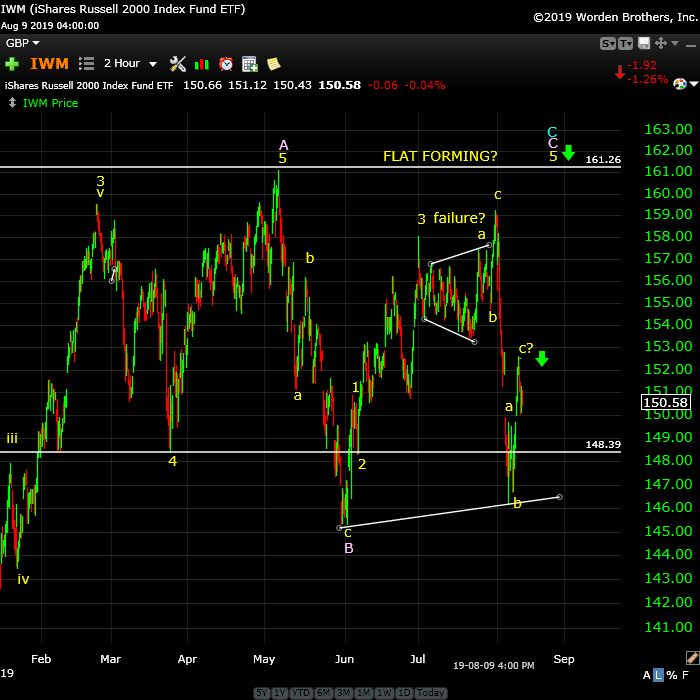 The Russell 2000 is somewhat of a “bellwether” (the leading sheep of a flock) for us in terms of foreshadowing the top of the US indices (ie — SP500), in that it must reach a new high at 161 before it heads back down to a new low. That’s because the previous wave down from 161 is in three waves. Three wave patterns always eventually fully retrace.

The eventual test of the 161 area should coincide with the top in the US indices.

In terms of the shorter-term move, the waves up from the 146 area are also in three waves, so they would be expected to retrace, unless they are part of a larger pattern.

Supporting that prognosis is the fact that the wave down from 161, although technically in three waves, looks like a single A wave down (the look of a corrective wave is very important in determining whether it can stand alone or requires another wave to make it “look” more like it’s corrective). In this case, based upon experience, I’d be expecting another wave down from the 163 area to current 146 low so that is has “the right look” fora corrective wave.

However, if it drops to the previous low of 145.32, the count would change and I’d have to reassess the wave structure.

The danger in the market that I keep referring to is at a high this weekend. There are multiple options for the road ahead. We appear to be in between patterns and that's always a time for CAUTION.

Last weekend, I expected a drop to a new low in the SP500 to get cash and futures back in sync (their current bottoms are at different price levels). That did not happen, but that doesn't mean it still won't. The waves up from last weekend are corrective across all the US indices and futures. That wasn't the case until Friday afternoon, when the DOW's wave pattern also turned corrective.

Until that time, I'd been leaning towards an ending diagonal playing out (this is highly speculative at this point and depends upon what happens this week). The possibility for the ending diagonal arises because the most recent wave down from the all-time high (the red A wave on the chart) comes after we already have a fourth (or B wave) in place (bottomed at about 2730 in ES). That suggests we're in fifth wave territory.

That means that either:

I've discounted a contracting triangle as the final pattern, because a triangle would have to include the fourth wave (the black B wave on the chart) and the structure would be difficult to imagine working within the current wave configuration.

This week will be a pivotal week, one way or the other. By the end of the week, we may well have our path to the top defined for us.

As I said last week, I'm now looking towards September for a top. If it's earlier, that would be great, but I don't think that'll be the case. We've never had a major August top — volume is too low.

Summary: There are options this weekend, but I'm leaning towards a drop to the previous ES low at about 2780.

We have one more new high in store before I expect a devastating drop. The larger degree pattern appears to be a flat (3-3-5 wave structures), which predicts a five wave dramatic drop to a new low below the A wave bottom at about 2300. The larger pattern in ES is a record-breaking broadening top (not an EW pattern).