Ahhh … another weekend of obsessing over this impending US market top. My focus has primarily been on the apparent non-confirmation between the currency pairs (including the US Dollar) and the imminent turn down of the US indices. I’m expecting a top in ES/SPX and their peers at the beginning of this week.

The principle of confirmation is one of the common themes running throughout the entire subject of market analysis, and is used in conjunction with its counterpart—divergence.

Confirmation refers to the comparison of all technical signals and indicators to ensure that most of those indicators are pointing in the same direction and are confirming one another.

Divergence (non-confirmation) is the opposite of confirmation and refers to a situation where different technical indicators fail to confirm one another. It is one of the best early warning signals of impending trend reversals. — Technical Analysis of the Financial Markets, John J. Murphy

Last week when I introduced the non-confirmation idea, I was referring to the US Dollar and the EURUSD currency pair. It appeared that the US Dollar had traced out a five wave impulsive wave to the upside, while EURUSD had traced out five waves to the downside (except that they were overlapping, which then counts it as a ‘3,’ or a ‘corrective’ wave—in Elliott Wave parlance).

I no longer believe there to be a non-confirmation between the US Dollar and EURUSD. The US Dollar does not look to me as through the waves up conform to the rules for an impulsive five wave move. I believe this set of waves up is telling me that both the US dollar and EURUSD will completely retrace. In other words, there is one more wave to go for both before a complete trend change takes place in currencies (you’ll find more information on this below the chart of UUP).

The non-confirmation example now appears to be that of the US indices turning down (perhaps this Monday), which the currency pairs (all appear to have one more wave left to go) complete their journeys to their final targets. I had originally thought they would all turn in tandem, but I can’t now see how that can happen.

Non-confirmations are usually prevalent at a major market reversal (a change in trend). 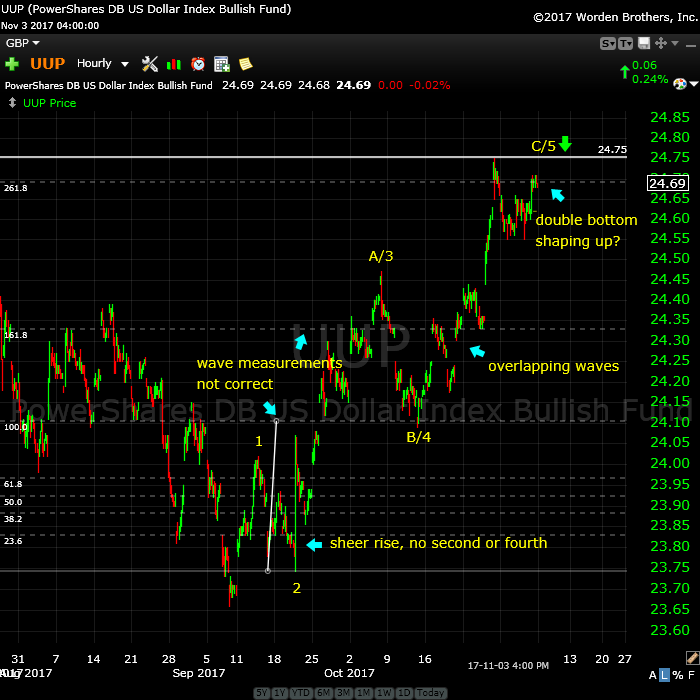 Above is an hourly chart of UUP (the ETF that is the surrogate for the US dollar). I can more easily access a smaller timeframe chart of UUP than I can of the US Dollar itself. The pattern is the same.

On this chart, I’ve identified some of the problems with classifying this wave up as an impulsive wave. As time progresses, it appears to be more and more a corrective wave. I now expect a turn down to a new low, while EURUSD turns up to a new high. Here’s a review of the items I’ve identified in the chart (from the bottom of the chart to the top):

In summary, the structure is overwhelmingly screaming at me … corrective. 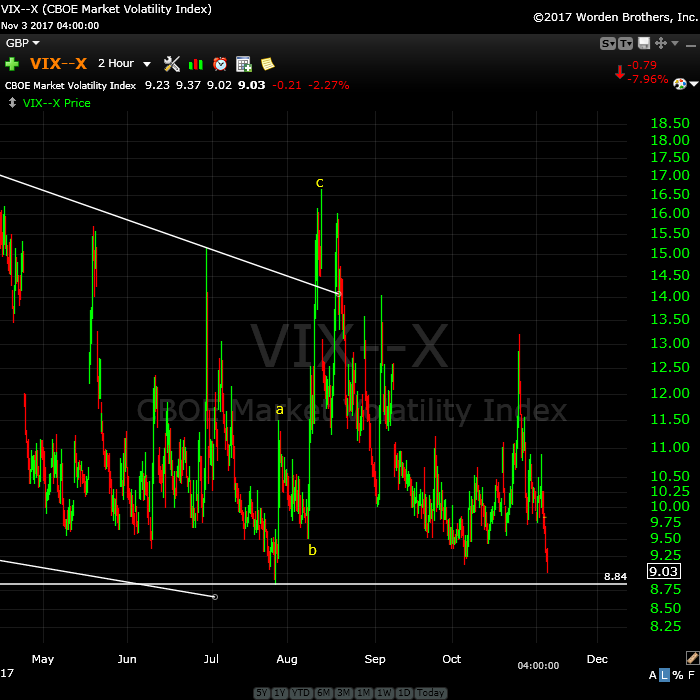 Above is the 2 hour chart of VIX. It’s current position is, of course, a major warning of an impending trend change. Complacency is at record highs while SP500 volatility is at record lows. In terms of the SP500, look out below!

I had predicted about three weeks ago that the VIX would need to reach a new low, or at least a double bottom, at the top of the US equities market. This would be an indicator of a US market top. Here we are with a small gap to fill to reach that target (you can see on the chart above).

You can find out more about the VIX and its meaning here.

CAUTION: There May Be Surprises!

I’m unsure as to how the US Dollar and USD currencies (which apparently have one more wave up to complete before a trend change) are going to be affected by an imminent change of trend in the US market.

Recently, as the US Dollar has been losing value (a bearish move), US indices have been bullish. Most recently (over the past few weeks), however, the USD currency pairs have been in a fourth wave (bearish) while the US indices have been rallying. I don’t know if the relationship has changed for the short term, or longer term, or if we’re just seeing a non-confirmation situation at a market top.

So we may see some surprises here while various assets move in relationships to each other that are different than we might expect.

Be careful while this situation resolves itself. Now’s not the time to take chances. There will be opportunities to get on board for this 5 year (at least) bear market.

Last week, I noted that the wave count for NQ was all but done and that ES had more subwaves to trace out, but was also very close to a top.

I expect a turn down for the US indices as early as Monday; this should mark the top of the rally and lead to a multi-year bear market. Over this weekend, we may see a few more points in ES, but my count is full and the market is exhibiting signs of being extremely tired. Note that VIX is almost at a new low, which I predicted a few weeks back.

Everything is set for a downturn and an end to the bull market. A fourth wave or drop with a further rally to a double top is also possible, but the market should turn down imminently.

Volume: Note that for some time now, volume has been expanding with selling, and drops considerably when the market heads back up. This is yet another signal of the larger, impending top. The turn up for the final leg is now showing signs of turning back down.

Summary: The count is full for NQ and ES, except for small subwaves as part of the final fifth wave.

Trader’s Gold Subscribers get a comprehensive view of the market, including hourly (and even smaller timeframes, when appropriate) on a daily basis. They also receive updates through the comments area. I provide only the daily timeframe for the free blog, as a “snapshot” of where the market currently trades and the next move on a weekly basis.