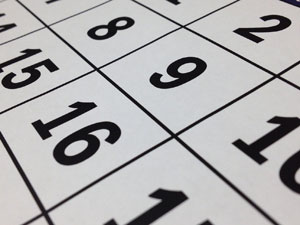 The takeaway from this past couple of weeks is that fact that the fifth wave up didn’t have a valid second wave in the usual, expected location.

You can see this in the chart of IWM (the Russell 2000) that I’ve posted below.

It was the same in the SP500 and in futures. The second wave is a critical marker in set of five waves so that you know you’ve completed the first wave and are entering the third wave. It’s important, of course, because in a bull market, the bottom of the second wave is the preferred Elliott Wave long entry. Without it, you’re confidence in where you are in the wave pattern takes a “big hit.”

The first wave is always the uncertain one, particularly in a corrective market, which is what we’re in. You never really know you’re in a first wave until it’s complete, but once it’s in place, all the other waves in the pattern will have a fibonacci relationship to it. This is particularly true in an impulsive pattern. However, in a corrective, five wave pattern, it’s a bit trickier, and, as a result, the second wave carries greater importance.

With this fifth wave up from the 3200 level, all we have is a tiny first wave, followed by an extraordinarily long third wave, which is 4.236 times that first wave. I’ve only seen this pattern a couple of times before. Now, you know it exists.

The problem is, it’s so rare, you tend to discount it, It primarily occurs in really bullish, larger third waves (which we’re in), but not usually in corrective waves, which we’re also in (the wave up from 2009 in the SP500 is corrective).

The bigger picture is that we’re currently in a very large fourth wave that began in January, 2018 (NYSE at 13,637) when we hit the top of a third wave; we’ve been in what appears to be a broadening top formation ever since. Fourth waves are the toughest of all Elliott Wave patterns to trade because almost all the waves within it are corrective, and the internal waves are unpredictable beforehand (but tend to trace out in prescribed patterns — triangle, zigzags, flats, or ending diagonals — once you know the pattern, you can predict the outcome).

Corrective waves themselves do not conform to the most basic of Elliott Wave patterns — the impulsive wave (which hits targets like a Swiss clock announces the time — very accurately).

As of the end of the day Friday, we have the remainder of the third wave to trace out, a high probability fourth wave down to trade, and then, most probably, either a fourth wave contracting triangle or fifth wave ending diagonal (both mostly sideways) to negotiate. I’m still expecting a top at the election.

The current measurements predict a top of the third wave in ES at 3521 (10 points higher in cash). If that comes to fruition, the fourth wave will be a “given.” After that, we’re likely to have a sideways pattern with final spike to a new high at the election on November 3. This is speculative, but logically, it seems to bear the most credence, given our current position across all markets, both domestically and internationally. 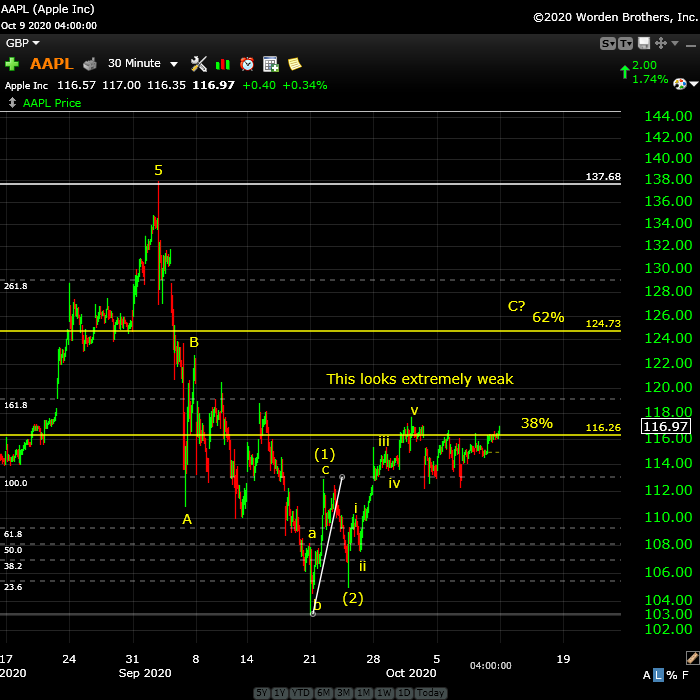 Above is 30 minute chart of AAPL showing us the setup at the end of the day on Friday.

We’ve expecting an ABC wave down once the indices (i.e., SP500) reach a new all-time high. With Apple, it’s certainly possible that we already have an A wave down and are in the B wave, with a final target of the 62% level. 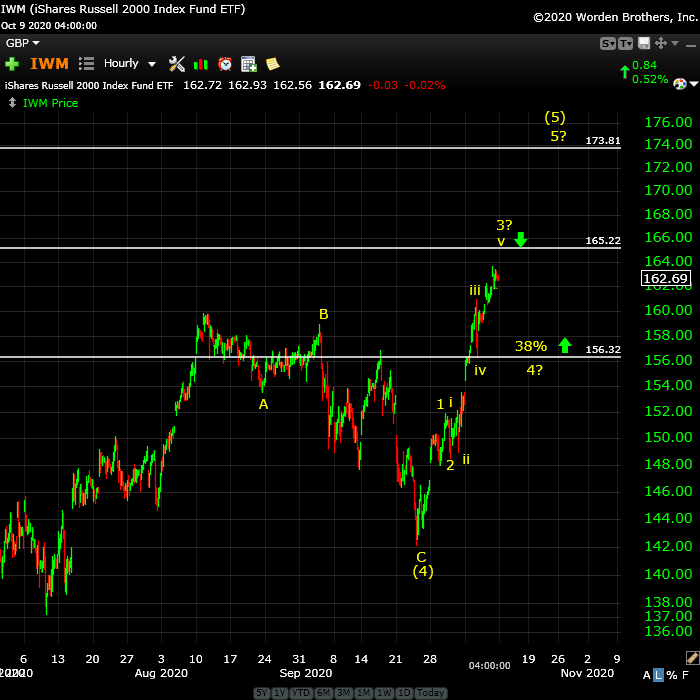 Above is the 1 hour chart of IWM (the Russell 2000) showing us the fifth wave up before a large trend change to the downside.

Note that this extraordinary bullish fifth wave up is missing a valid second wave. I’ve marked one, but’s it’s simply too short: It didn’t even retrace 38% of the first five waves up, which would be a minimum requirement to even consider labelling a retrace wave a second wave. The same phenomenon is present in the SP500.

Presently, we’re completing the third wave of the fifth; it has a target of 165 roughly and will likely make that target in the first half of the coming week. Then I expect a fourth wave down.

Fourth waves typically retrace 38% of the entire fifth wave. In that case, the target for the bottom of the fourth wave is 156.00.

The final fifth wave is typically 1.618 times the length of the first wave (marked with a yellow 1), but when you have a third wave that is twice the usual extended length, the final wave is usually double the usual length, too, at 2.618 times a wave one. That target is 173 (and change), which will take this index to all all time new high. I expect a trend change when it reaches the target. 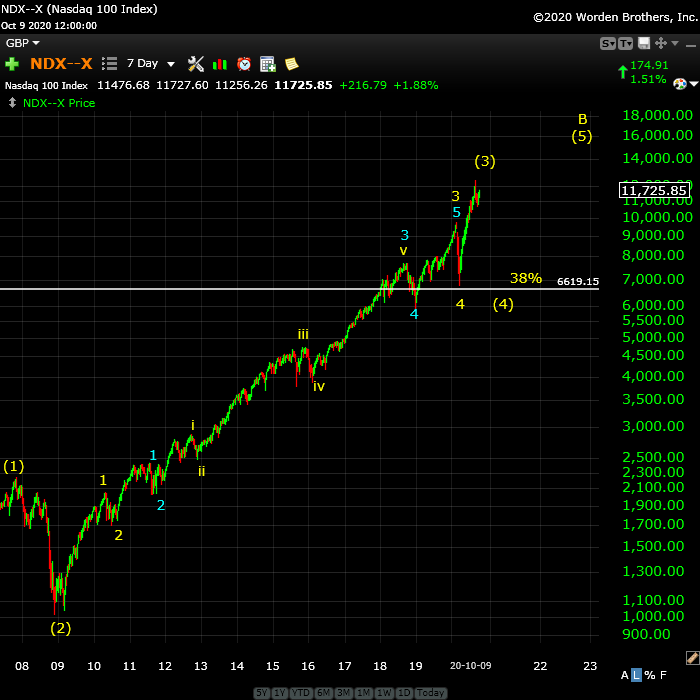 Above is 7 day chart of NDX showing us the third wave up from the 2009 low.

I haven’t posted this chart recently, partly because it hasn’t changed appreciably. I put us at the top of the third wave in NDX (yellow circle 3), with a large fourth wave down to come after the Nov. 3 election, and a final fifth wave up to a new high next year. That will end the 500 year bull market trend.

The final fifth wave up has ended in a very rare pattern, a single wave up, so far, with no second wave. I've only seen a wave like this a couple of times before and they're always difficult to navigate, because the second wave is a major Elliott Wave marker. In fact, it's the preferred entry point for a trade. It's also an important "compass point" that tells you that a first wave is indeed complete, giving you confidence that a third wave is to follow.

In any case, it's clear now that we have a rare patter of a very tiny first wave and a third wave that will be 4.236 times the length of the first wave, when done. We're getting close to that wave three top and I'd expect it in the first half of next week.

After that, we should still get a fourth wave (although, it may or may not be a normal 38% retrace situation.

The fifth wave will be the question, because if this market is going to turn down on November third, then it's logical that we're either going to get a fifth of fifth ending diagonal, or a fourth wave contracting triangle ending is a spike to a new high.

Almost all the currency pairs I cover are in possible broadening top (except USDJPY), as is oil, and DXY.  DAX (the German exchange) appears to be in an ending expanding diagonal. So, we have ending patterns almost right across the board. Now, it's only a matter of time. The US market needs one more high.

Summary: It's an exhausted market getting close to a top, which I now think will coincide with the US election.

The bigger picture is that the SP500 appears to be in a kind of broadening top formation (not an EW pattern) on a weekly chart. Other US market indices have completely different patterns, which is the sign of a very sick market, and one in the final stages of this 500 year rally, and a corrective B wave up from 2009.