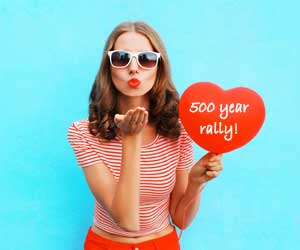 Get Ready! US indices and Oil are setting up for a final top and currencies, for the most part, are going to drop a bit to accommodate them. In the currency pair world, we’re a bit of a mess this weekend, with non-confirmations between them. EURUSD has already turned the corner and in the fifth wave (and reached a new high this week), but I see a substantial drop on the way. The wave up, as I’ve saying looks corrective. The British pound is in the same boat in terms of expecting a wave down early this week.

AUDUSD and USD CAD have smaller waves to contend with, but the story is similar with them. Neither has turned into their fifth waves, I don’t think. The waves from Friday in both look corrective so far, and I expect them to stay that way.

What I’m seeing is a fractured market. With each of the assets, the final waves will play out in full, but it’s virtually certain that the US indices are going to top ahead of the currency pairs and the dollar.

In the US indices, we’re looking for a final kiss .. perhaps a double top in all of them, although we could see extended waves (I think tis is lower probability). Fibonacci measurements, as you’ll see throughout my report, are strongly suggesting the final kiss at the top will be “it.”

The principle of confirmation is one of the common themes running throughout the entire subject of market analysis, and is used in conjunction with its counterpart—divergence.

Confirmation refers to the comparison of all technical signals and indicators to ensure that most of those indicators are pointing in the same direction and are confirming one another.

Divergence (non-confirmation) is the opposite of confirmation and refers to a situation where different technical indicators fail to confirm one another. It is one of the best early warning signals of impending trend reversals. — Technical Analysis of the Financial Markets, John J. Murphy

A few weeks ago, when I introduced the non-confirmation idea, I was referring to the US Dollar and the EURUSD currency pair. It appeared that the US Dollar had traced out a five wave impulsive wave to the upside, while EURUSD had traced out five waves to the downside (except that they were overlapping, which then counts it as a ‘3,’ or a ‘corrective’ wave—in Elliott Wave parlance). I have come to the conclusion that they have both traced out fourth waves and are now in their fifth waves.

While there’s a minor non-confirmation between the dollar and the euro, there are larger ones between other pairs and the euro. I show this throughout my video report this weekend. There’s an even larger one between the US indices and the USD currencies. The US market appears to be turning down first, but there’ll be a final wave for currency pairs before they’re done.

Non-confirmations are usually prevalent at a major market reversal (a change in trend). 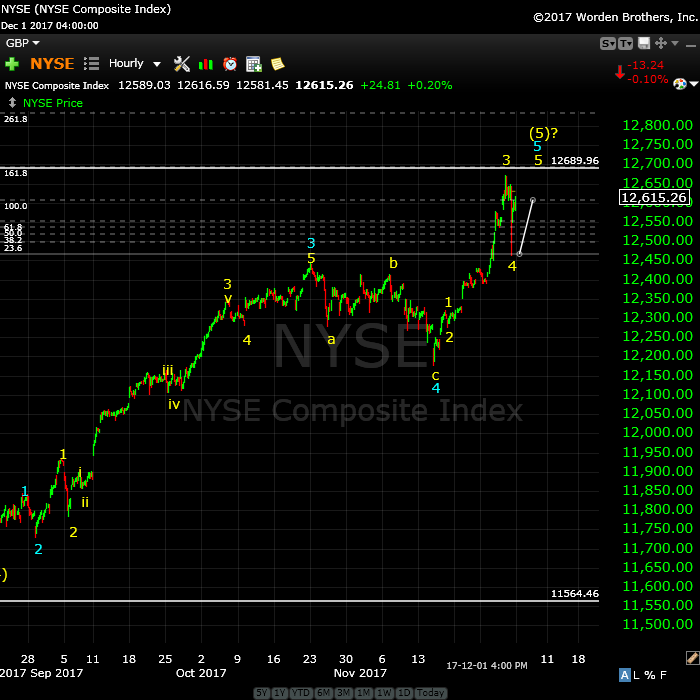 Above is the hourly chart of the NYSE Composite index. Last weekend, I posted a chart of the NYSE, calling it the “straggler,” in that it needed a new high, but it was the last index to make one. Well, we got it.

I’d expected perhaps a fourth wave right away, but the third wave extended. We got the fourth wave late this week and now, we have only the 5th subwave left to go. Going by the length of the first wave of the fifth, I’ve placed the fibonacci retracement tool to project the length of the final wave from the bottom of 4. If this final wave rallies to its usual full length (1.618 X the length of wave 1), we should reach just under 12,700. Wave 5 could extend, but both a 3rd and 5th extension is very rare, so I think this should be the end of it.

The SP500 has the same pattern and prognosis.

Volume: With the sharp drop this week in a fourth wave, volume has spiked, as would be expected. That's the selling starting.

Summary: The count is full for the US market in general, except for small subwaves that form the balance of a motive set of waves in SPX and some other major US indices. ES broke the potential ending diagonal to the upside and has formed five impulsive waves up. Except for a final 5th wave subwave, we're at a top. We may get a first wave down as early as Monday. It looks like the Nasdaq has topped but we still need confirmation (a new low below the previous 4th wave).

Above is the 60 minute chart of ES (click to enlarge).

Well, early in the week, we broke the ending diagonal and forced me to revise my count. I was expecting the fourth wave of the ED but we turned up instead to parallel the count and structure of the SPX and NYSE.

On or about Thursday, I was expecting a fourth wave of the fifth and on Friday, we got the bulk of it. The waves down are clearly in three waves. We now have a full three waves up, as per by count above. We're waiting to finish off the final 5th of the 5th perhaps over the weekend. If we reach the top on Monday morning, watch for the start of the first wave down in ES/SPX.

The fibonacci tools on the chart show that the third wave ended up being extended (2.618 X the first wave) and the 5th wave, if it rallies to the usual 1.618X the first wave, will complete a double top (at ~2660). There is the possibility that it could extend to 2.618 X the first, but that's less probably at this point, I think, looking at what other indices are doing (and oil, which is also near a top). If it were to extend, the target would be about 2694.

Short term: The wave count is now virtually complete and we may end up in a double top for ES as early as Monday, if so, watch for a turn down into a first wave.