Back to the Future

There was some attention paid in the free blog to the impending “crash” and the suggestion that it must be an EW third wave, due to it’s intensity, with the assumption that the market just keels over at some point and heads down immediately in a third wave, somehow skipping over the requirement for a first and second wave, in defiance of the Elliott Wave Principle.

I’m sensitive to these suggestions that somehow “this time is different” and so this is perhaps an opportunity to revisit Elliott Wave history and see what’s historically happened with a major top. So, let’s use 1929 as an example, since it’s such a dramatic one (but you could just as well use 1987 or the 1973/4 bear market, or in fact, any of the crashes in the 1800s—there were lot of them). The pattern in much the same across all market “crashes.”

It also shines a light on my contention that “picking a top” really isn’t that important. For an Elliott-waver, the top is always at the end of the final fifth wave (that never changes) so that the path to the top is simply a case of counting waves, which allows one to make money on both sides of the market, simply by anticipating turns.

The other influence on my thinking in this regard is the definition of a “crash” as being something that is unexpected and unforeseen until the moment it happens. Nothing could be further from the truth. In fact, the new trend will be marked by five waves down and three waves up to at least 62% of the drop from the top, AFTER we’ve seen the top.

So … there’s no real advantage to having a date, if you can count waves. I can play the final wave right to the end and then catch the top within the first set of waves down. End of story.

Yogi Berra is generally regarded as one of the greatest catchers in American baseball. But he was much more than that, of course, to his fans. He first coined the phrase, “It ain’t over till it’s over” in 1973. He became internationally well-known for other pithy statements like, “It’s like deja vu all over again,” and “You can observe a lot by watching.”

Most of these truisms has an element of “the obvious” in them, and “It ain’t over till it’s over” certainly fits this rally.

This extraordinary “blow-off” rally has gone on far longer than anyone really thought it would, but that’s what rallies at a major top are supposed to do, and this one is a 500 year top—the largest bubble top in all of history!

There’s more to come but we’re measuring in weeks now rather than  months, in my humble opinion.

It’s somewhat gratifying to see all the currencies (including the US dollar) and US market aligning in their movement (they’re all in corrective, most travelling towards the apex of a fourth wave) turning at the same time. This is something I’ve been watching at commenting on for about a year and half (although I’ve certainly received enough flak for it). This is yet another element the market employs to help us anticipate the final turn down.

But, back to that “review” of the 1929 so-called “crash.” What’s important here is that, counter to “market lore,” we never have a sudden, unexpected crash. Tops always provide lots of warning. However, the pundits and others (the “pundit herd,” perhaps) wakes up at about the time of a larger drop and because the herd hasn’t been paying attention, the sudden drop is labelled “the crash.” We know differently.

If you want to know the future, first take a really good look at the past. 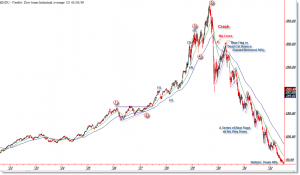 Unexpected Crashes are a Misnomer

Above is the daily chart of the DOW from January 31, 1929 through December 31, 1932. This chart shows the extent of the entire 1929 stock market crash. You can see that the overall structure is a 3 wave drop, the C wave very much longer than the A wave. Keep in mind that this is a log scale and so the distances are not arithmetic.

The A wave was comprised of 5 waves, as was the C wave. This was corrective zigzag and I’m expecting a similar pattern this time around. These huge crashed don’t change much. They’re expected to be in 3 waves and to retrace up to 90% of the previous rally, reverting to the previous 4th wave level, which in this case, was in 1974. In short, we have a long way down to go.

Nobody, and I mean NOBODY (in the herd) will see that coming, and many won’t see it in its wake, until they’ve had the last dime sucked out of their bank accounts. Such is human nature.

Above is the daily chart of ES (click to enlarge, as with any of my charts). After dropping last weekend, we took the entire week to cement our position in what looks like the bottom of a second wave of an ending diagonal.

We should start to head up into the third wave of the ending diagonal at the start of the week. Monday, of course, is also the "American Eclipse."

While ES/SPX appear to be in ending diagonals, NQ requires 5 waves up to a final high. It's completing the 5th of a fifth to a final top. Both finishing structures have good opportunities for determining where the top will be beforehand. We need to conclude the A waves (or 1st wave, in the case of NQ) in each case to give us an initial projection for the top.

In an ending diagonal, we have three waves left to go until the very top. In a five wave structure, there are, of course, five waves. How they will synchronize will be interesting, as they will have reach the final all time highs at the same time.

Summary: The final wave five in ES and SPX is in progress. Although early to call an ending diagonal, deductive reasoning has served to eliminate other potential patterns. Ending diagonals are final waves and mark the end of a trend.