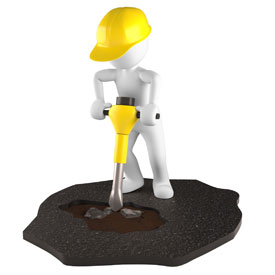 Drilling Down Into the Sub-Waves

It appears few commenters in the free blog care much about Elliott Wave, but we keep rolling along in the Trader’s Gold area reading the wave and staying aligned with the moves in the market.

I called the current wave to the downside corrective right at the top, and of course, corrective waves don’t change their tune part-way down.

This week coming, I’m expecting a turn and then a rise on the way to a new high in US indices. This after a number of pattern failures (ending diagonals in all the major indices failed one by one over a period of a couple of weeks).

We’re left with a corrective fourth wave that looks like it will retrace to the 38% level before it will finally turn up in the long awaited C wave to a new high.

Fourth waves are the most difficult of all the Elliott Wave patterns to trade.  I generally don’t trade them, but this one (in the NYSE) has now lasted almost a year and a half. So, you’re damned if you do, damned if you don’t.

On top of the challenge of trying to predict fourth wave patterns is the fact that, in this particular case, we have a huge non-confirmation within the major US indices. The bigger picture is that while the NYSE is clearly in an ABC fourth wave (not complete to the downside), the DOW and SP500 are in third waves (right near the top) and still have to drop into their fourth waves.

That said, there seemed to be so much confusion out there as to the nature of this latest B wave down from 2960 in ES, that I put together a short video for my Trader’s Gold folks last week. It shows what I look for in terms of classifying a wave as corrective, taking this current wave down as an example.

Analysis of ES Corrective Wave Down

Above is a video of the 60 minute chart of ES. There’s a lot of chatter out there as to which way the market’s going next and so I decided I would create a video showing what I look for in a wave down to determine if it’s impulsive or corrective. Hopefully, you’ll find this useful as you learn more about how the market moves. It’s important to be able to determine whether a wave is corrective, or not, to know whether to trade it (if at all), when it might turn, where it will go when it does. 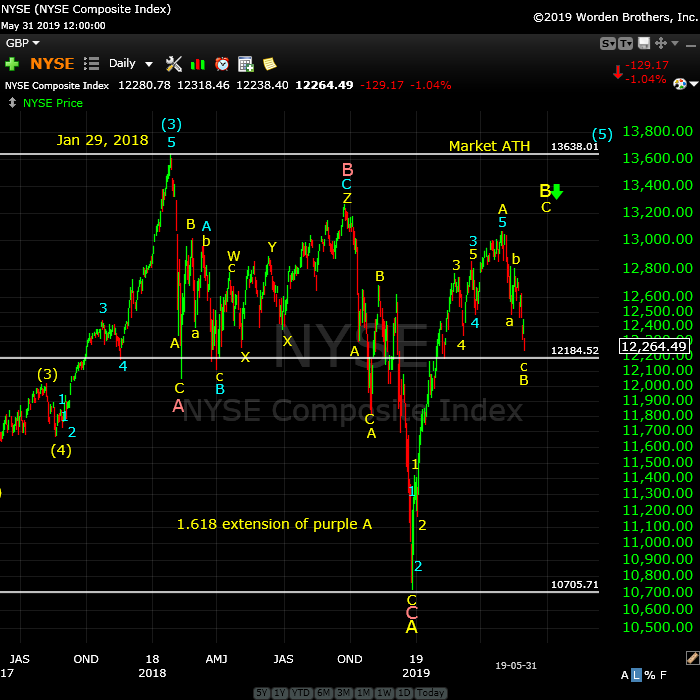 This weekend, we have a B wave down almost complete (the white line at 12,184.52 is the 38% retrace level, which is likely the turning point to the upside), and we’re looking for a bounce into a C wave up to the previous high (slightly above 13000). A top there will result in a turn down for a continuation of this fourth wave.

Possible timing: I’m now expecting a high somewhere in July, with perhaps our big drop beginning then and lasting through early September (my dates here are speculative). This is a change in thinking about the timing, due to the fact that we’re entering the summer season, which promises an even lower volume market than we’ve been seeing.

Last weekend, I suggested we might see more weakness in the US indices, as we wait for the larger C wave bounce, and that's what we've seen. However, the bounce is nearby and we may see a bottom early in the coming week.

One by one, the ending diagonals that had formed in almost all the US indices broke down. Because the wave up from Dec. 26 is corrective, there's no requirement for the B wave we're near the bottom of now to retrace to the usual 38% level, but that appears to be where we're going (possibly due to the requirement in the Nasdaq to hit the 38% level, as it's waves are impulsive). I expect more weakness over this weekend.

Fourth waves are the most difficult waves to trade of all the Elliott wave patterns, but clarity is now returning and we have to more certain moves ahead of us, not just in the US indices, but in other asset classes, as well.

The projected turn area (the C wave bounce) is identified on the daily chart at around 2720 or so (38% retrace level). Elliott wave guidelines for entry after a turn up is to wait for a first wave up in five waves to the area of the previous fourth of one lesser degree, and then a three wave retrace to around the 62% retrace level. That would be the high probability entry. You would enter there, or to reduce risk further, wait for a new high above the high of the first wave.

As I've been saying for some time, after we reach the final high (which should not be much above the current high), we'll see a turn to the downside with a major move to a new low under 2100.

It's impossible to successfully analyze this market without taking into account the movement of a number of related asset classes. The market has gradually been aligning across these asset classes and now virtually everything is moving more or less in "lock-step." When you trace out a major top, all major indices have to top at the same time. This 500 year topping process will include many international exchanges.

Summary: Expect a bounce to a new high to complete this large, corrective "B wave" up from the Dec. 26 low. That will result in a very large ABC corrective wave, which must fully retrace to a new low.

Once we reach a new high, I'm looking for a dramatic drop in a 4th wave to a new low. The culmination of this drop should mark the bottom of a large fourth wave in progress in the NYSE since January 29, 2018 - a year and a half of Hell. ES will eventually target the previous fourth wave area somewhere under 2100.